The Grinch Socks by Stance 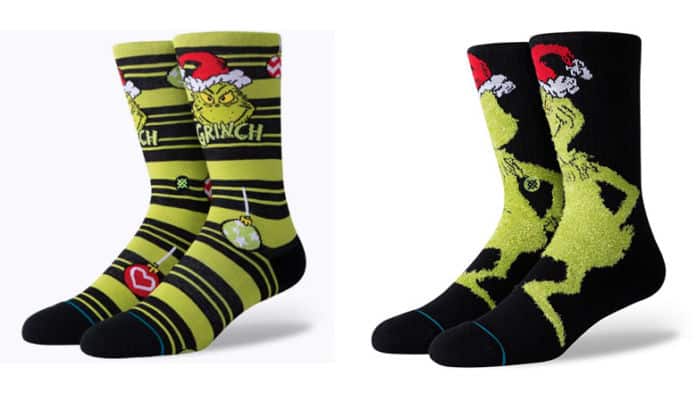 Buy it From Stance

You’re a mean one, Mr. Grinch. Except, instead of unwashed socks, your heart is full of these officially licensed The Grinch socks. Three pairs of holiday mischief make for some Christmas morning comfort with this trio of socks.

The Grinch and his smile of termites adorn each pair, which are colored and styled to fit right into Dr. Seuss’ The Grinch Who Stole Christmas. The first is a striped black and green motif with the Grinch’s Santa hat-wearing head grinning at the shin. Finishing off the festive design is a series of Christmas ornaments, sure to become a target for the sly Grinch.

See Also: How to Stream The Grinch

Another pair puts the full focus on The Grinch and his foul personality. The top half of the sock, just above the heel, is a solid black with a print of The Grinch himself. On the foot, you’ll find those sick yellow eyes staring at you against a backdrop of green.

For the third pair, The Grinch is prepped for his destruction of Christmas. Donning a Santa hat, the pair depicts the front and rear of the dastardly villain of Whoville. Set against a black backdrop, The Grinch pops and is impossible to miss. It may not be his best view, but it’s the one he’s proud to show off.

Slip these Grinch socks under the tree for a loved one or wear them during the holiday season to support the misunderstood Grinch and keep your feet warm. Of course, you’re obligated to watch every version of The Grinch Who Stole Christmas while wearing them – that just comes with the territory.

It’s cold out there in Whoville. Cover up those feet with a pair of socks that help show how soft and warm The Grinch’s heart really can be.