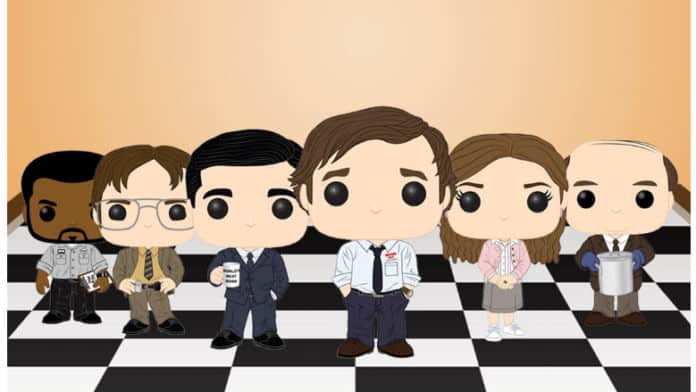 The New York Toy Fair has officially revealed what The Office fans have long been clamoring for. The exhibition put on display their upcoming lineup of The Office Funko Pop figures — with preorders now live on certain sites (like Entertainment Earth).

The Office Funko Pop roster covers the essentials of the series. There’s Michael Scott holding his iconic “World’s Best Boss” mug. Dwight too with his signature mustard yellow shirt. Craig Robinson’s Darryl Philbin is available with clipboard in hand too.

There’s even a ridiculously great The Office Funko Pop of Kevin Malone with his famous pot of chili – minus the carpet mess, of course. There’s a two pack available as well entitled Toby vs. Michael. The duo portrays Michael pointing at Toby mocking him as Toby holds a rock with a sticky note that reads “suck on this.”

Of course, there are Jim and Pam varieties of the The Office Funko Pop figures too. The Jim Halpert figures show the character as nondescript, with his hands in his pocket. And the Pam Beasley figure has the character in her generic pink sweater and white tennis shoes.

At the New York Toy Fair it was announced that there would also be a rare Limited Edition Chase Jim Halpert figure available too. So be sure to keep an eye out for that one as well.

You’ll be able to find The Office Funko Pop figures on both Entertainment Earth and Pop in a Box. As of posting, it doesn’t look like Entertainment Earth has published their preorder offerings as of yet. So direct your browser over there and hit refresh as frequently as you’re able. As for Pop in a Box, preorders are listed, but the most popular characters (Michael, Dwight, Jim, and Pam) are currently listed as sold out.

Each The Office Funko Pop goes for the typical norm of $10.99. The Toby vs. Michael 2 Pack lists at $19.99. Funko states that the figures should begin shipping in August, however, Entertainment Earth has them listed as July.

In the meantime, check out more ridiculously cool stuff you can blow your rent money on.

Previous articleBatman Teenage Mutant Ninja Turtles Animated Movie Announced
Next articleTransformers: War for Cybertron Show Hits Netflix Next Year
Jeff Scott
Growing up a 90's kid, Jeff found his love for gaming during Nintendo's heyday. Because of that, you could (perhaps sadly) call him a "Nintendo Fanboy" to this day.