The Terror Will Debut in March on AMC 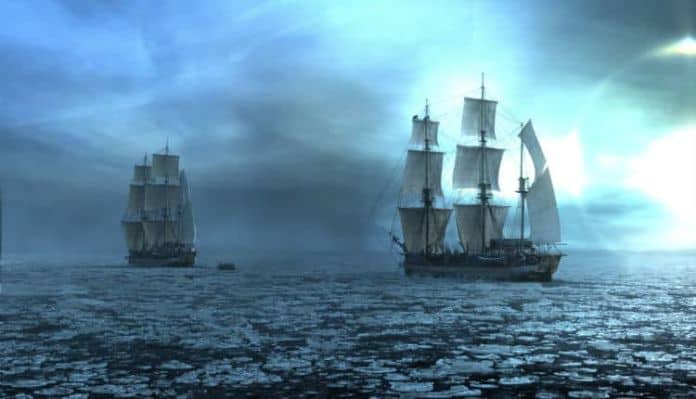 AMC has announced a debut date for their upcoming naval suspense offering, The Terror. The show will debut with a two hour premiere in late March. 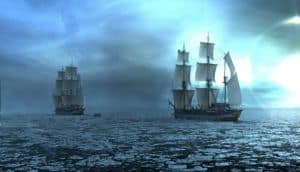 The Terror comes to us from Executive Producers David Kajganich and Soo Hugh. However, the show is based upon the award winning 2008 book authored by Dan Simmons. The book is inspired by the true events of the Royal Navy’s attempts to explore uncharted territory in the hopes of discovering the Northwest Passage.

Due to the hostile northern climate, things begin to quickly unravel for the ship’s crew. AMC describes it:

“Faced with treacherous conditions, limited resources, dwindling hope and fear of the unknown, the crew is pushed to the brink of extinction. Frozen, isolated and stuck at the end of the earth, The Terror highlights all that can go wrong when a group of men, desperate to survive, struggle not only with the elements, but with each other.”

In the novel, starvation and illness begin to ravage the crew. Word of mutiny eventually spreads, as does the possibility of cannibalism. However, possibly more horrifically, is the existence of an Arctic monster stalking the crew across the frozen landscape.

Kajganich and Soo state that “The Terror captures a rare combination of fascinating history, complex and flawed characters, the inextinguishable human spirit and the horror and promise of an uncharted world.” The traits of the source property helped to earn the book’s author, Dan Simmons, a British Fantasy Award in 2008.

It’s yet to be seen how AMC’s The Terror will tell its narrative as compared to its source material. But Simmons’ book begins by thrusting readers right into the middle of the plot. The story then switches amongst multiple perspectives, both past and present, utilizing both third and first person accounts.

The Terror will get its first shot at claiming an audience this coming Sunday. A sneak peek of the show will be attached to the mid-season finale of The Walking Dead. But if you don’t want to wait until Sunday, you can head to AMC’s site and watch the sneak peek for yourself right now.