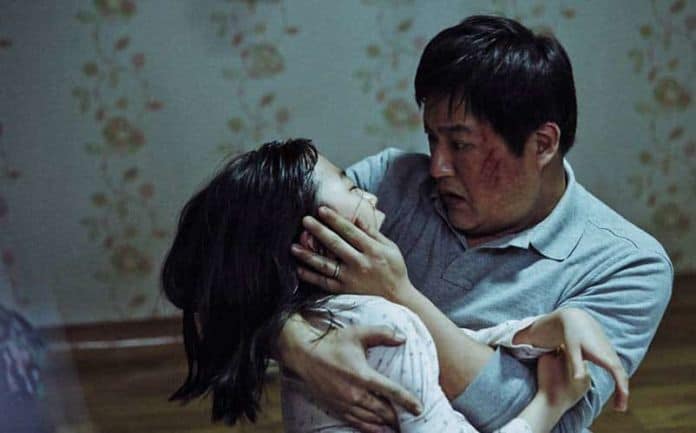 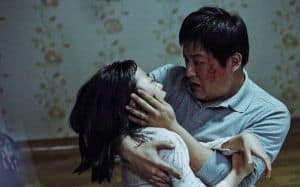 The Wailing is a horror film that many western audiences may not be used too, as it throws away our typical notions of what a scary movie should be. There are no jump scares or any haunted house tropes that we are quite familiar with, as this is a horror film that prefers to take its time.

A lot of time, in fact, as The Wailing clocks in at a hefty two and a half hours. Normally this would buckle any modern horror film, yet director Hong-jin Na does a masterful job at pacing the story out. Well, for the most part, but we will get to that.

One of the most striking things about The Wailing is how well it blends a variety of genres, which allows it to constantly keep viewers on edge. There is a lot more dark humor than you might expect where the main focus is a bunch of grisly, mysterious deaths. Though this may seem odd at first, the blend of dark humor plays well into giving this film a breath of fresh air and in developing the variety of characters interwoven into this dark tale. Hong-ji Na also laces in the some thriller and crime genre aspects, which helps to establish the oppressively dreadful tone The Wailing has.

Make no mistake, this film is incredibly depressing and masterfully conveys a sense of hopelessness. Scares are not at frequent as you may think, but when they come it’s always with a purpose. Much like last years The Witch, this brand of horror is more focused on subverting our preconceived notions of what a scary film is. Which is arguably the greatest strength of The Wailing, as it constantly shifts and changes genres to offset any guesses that the audience might have.

Even the hauntings are extremely varied, running the gambit from exorcisms, ghosts, zombies and more. This is a slight problem, though, as not every creature that shows up is fully explained and relies heavily on the audience suspending their disbelief. If the film didn’t run for nearly three hours it wouldn’t be as much of a problem, but once the second act sets in audiences may be lost to what’s happening. 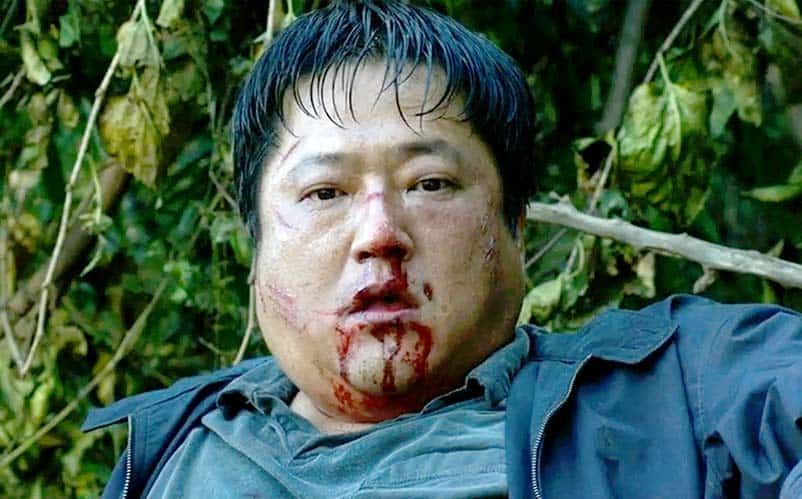 Even the hauntings are extremely varied, running the gambit from exorcisms, ghosts, zombies and more. This though is a slight problem, as not every creature that shows up is fully explained and relies heavily on the audience suspending their disbelief. If the film didn’t run for nearly three hours it wouldn’t be as much of a problem, but once the second act sets in audiences may be lost to what’s happening.

And this factors into the most glaring issue with this movie as the pacing is all over the place at times. Both the first and third act are relatively strong and pick up some much-needed energy, but the second feels like a slog to get through. Scenes in this film just are not needed and could probably have been left on the cutting room floor.

That’s not to say the scenes aren’t well made, just in the larger context of the story it heavily weighs the movie down. There are also multiple points where it looks like the film has climaxed, only to charge headlong into another wild circumstance. Sadly this robs the true ending of the true impact it deserves, which let’s be clear – this is one of the best endings to a horror film I’ve seen.

However, The Wailing‘s greatest strength are the wonderfully developed cast of characters. Leading man Jong-Goo (Do Wan Kwak) plays one of the town’s local cops whose haunted by his own demons.

Though unlike some other horror films, these demons are not anything too extreme; which helps Jong-Goo feel far more relatable. Don Wan Kwak’s performance is fantastic as his ability to convey a plethora of emotions is pushed to the absolute limit.

Whether you want to or not, there is no doubt that audiences will find themselves invested into both his family and his own safety.

The fantastic performances also translated to supporting cast as each character is truly lived in by their respective actor/actress. No one character hinders this movie with the possible exception of the mysterious shaman (Jeong-min Hwang) who is fairly inconsistent in his performance. He doesn’t always work in certain scenes and much of his performance is a bit too over the top for this movie. While I understand he is supposed to be a shaman, his general personality feels askew with the rest of the cast.

That being said, The Wailing is one of the best horror films of the year and a must-see for any scary movie lover.

With a fantastic use of genres, monsters, and character development; this was truly a horrific, bloody experience that kept me invested for the entire lengthy. With only minor problems, The Wailing is a dread-inducing horror film you won’t soon forget.