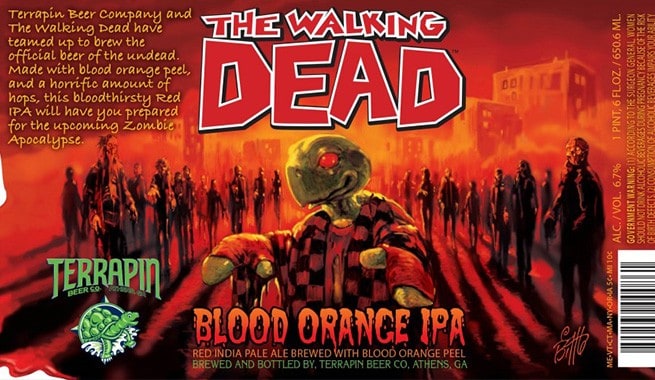 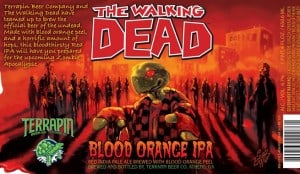 We’ve seen a ton of pop culture beer hit the market already (including an entire series of Game of Thrones beer from Ommegang). Now, Terrapin Beer company, which is located in Athens, Georgia, has announced their latest brew, which will be of special interest to those zombie-loving beer drinkers. Their newest craft brew will see the company team up with The Walking Dead to brew up the official beer of the undead.

The Walking Dead Blood Orange IPA is brewed with blood orange peel, a “horrific” amount of hops, and is in the style of a red IPA. According to Terrapin, it “will have you prepared for the upcoming zombie apocalypse.”

The Walking Dead logo branded at the top of the bottle’s label is that of the comic book rather than the TV series. And in case you’re wondering why the hell there’s a zombie turtle on the label, it’s because Terrarpin’s logo contains a turtle.

The Walking Dead Blood Orange IPA will be available in both 22 oz. bottles and on draft, and will contain 6.7% alcohol by volume. No release date for the Walking Dead beer has been set, but we will go ahead and expect it at some point just before the Season 6 premiere in October. [via Comicbook.com]