ToeJam & Earl: Back in the Groove Review: Not So Funky

ToeJam and Earl: Back in the Groove! positions itself as an all-new adventure game from 1991. After accidentally creating a black hole, Lamont’s spaceship is scattered into pieces across the 25, now flat, layers of Earth. You’ll spend your time in this action rouge-like strategically using items to boost your stats, avoid dangerous earthlings, and ultimately locate all 10 pieces of Lamont’s ship. Unfortunately, the funk that ToeJam & Earl is known for is merely the smell of game design gone bad in 2019.

Creative power-ups, a bold cartoon look, and some amusing mini-game moments aren’t enough to salvage a concept as drab as the muted collection quest that spans across a series of repetitive levels. Plagued by extremely slow-moving characters, ToeJam & Earl manages to turn the action roguelike genre into a slow, monotonous walk towards death at worst and an unfulfilling sense of completion at best. Opening presents is the game’s most interesting feature but the primary task of slowly walking through the map with the constant threat of enemies crashing into me actually discourages me from further exploration. This game’s redeeming qualities can only be seen through rose-colored glasses: potentially praised for staying true to a concept that doesn’t hold up today. 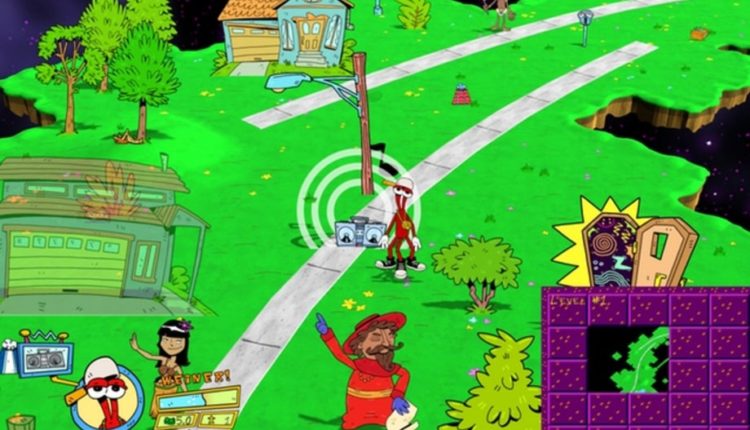 Newcomers to Toe Jam & Earl will find comfort in the Tutorial World. This smaller version of the game only has 12 levels and includes constant onscreen prompts explaining everything you come across i.e how to play the mini-games, how presents work, and how to distinguish between good/bad earthlings. If you prefer a different kind of crash course, the in-game manual has everything you need to know. Unfortunately, this manual can only be accessed before loading the game.

Like other rogue-likes, a game over means starting again from scratch. You need to find all 10 pieces of your broken Rapmaster Rocketship to win the game. The adventure consists of 25 levels and the last rocketship piece is always on the 25th level. An icon of the ship appears next to the level number, so it’s always clear when you’ll need to find a piece and when you can simply go straight to the elevator takes you to the next area.

Power-ups appear in the form of presents which are either out in the open or hiding in houses, bushes, and trees. Use the search button or walk up and shake these objects to help these hidden objects appear. The same thing applies to food which can be used to heal yourself.

Not every item is created equal. Rotten food hurts you and some presents actually have negative effects. For instance, the Total Bummer present instantly kills you and Burning Up will make you catch on fire until you jump off the level (back down to the previous one) or jump into the water (assuming there’s water in the level). Once you recognize the names, you can always drop a present from your inventory.

The frustrating part is that you don’t always know what’s inside the presents, though you can have mystery presents inspected by a friendly earthling (for a price) or by using an Inspection present.

Using these presents boosts your XP and ultimately your stats so you should use them often. The problem is not all of them are useful at just any given time so it feels like you’re constantly being pushed to use whatever is in your inventory just for the sake of using as much as possible.

Additionally, because the in-game manual is only viewable before loading your game you’ll need to memorize what each present does or have them pulled up elsewhere. Some presents are easy to remember because the name is obvious: Icarus gives you wings and Extra Bucks gives you a few dollars. But others are more forgettable, especially if you haven’t seen them before, such as Rootbeer and Rosebush. Ultimately, this quality of life oversight isn’t the biggest inconvenience but it still can mar an early playthrough.

Sometimes items can help get you out of a tough situation because your incredibly slow character can rarely outwalk nearby enemies. An item like the “Hi Tops” present is wonderful because it lets you run away but hopefully you have it when you need it. This sort of inventory management is the game’s only real strategy but it’s not one that’s enjoyable or enticing.

Dodging enemies is a hassle rather than a fun challenge and nothing about the progression system makes me want to engage with it. Most foes can simply be avoided but when they start chasing you down you’re left frantically searching your inventory for something to save you. It’s a pain rather than a source of true action. 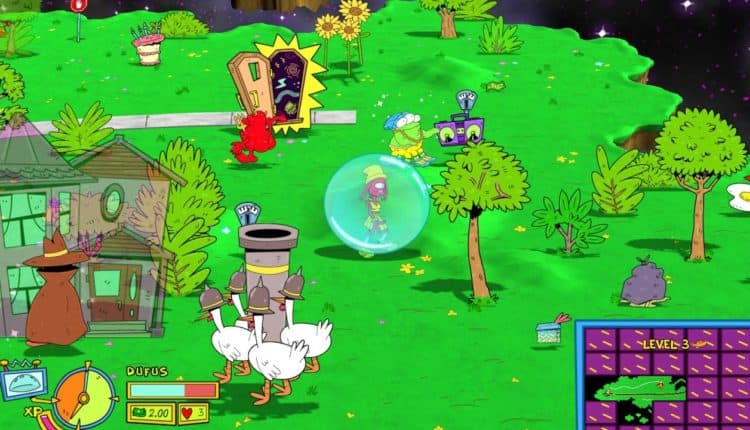 There’s a wide cast of nine playable characters to choose from, each with their own statistics related to speed, life bar, present skill, search skill, inventory size, and luck. But since your character is limited to walking around and finding items there’s not much value in leveling up any of your stats. Don’t get me wrong, it can make the game easier, especially in the last few levels where bad Earthlings can do some serious damage. But because every level is about finding the spaceship part and the elevator exit (and in 15 of those levels you’re actually only looking for the exit), once you find what you need there isn’t much incentive to dig deeper into the environment because your task is already simple. Walk around until you find the ship. Walk around until you find the elevator. Repeat.

Exploring every section of the admittedly small levels, for the sake of boosting stats, feels like trying to become efficient at a job you hate. Could you do this better? Absolutely, but why expend the energy digging deeper into something when you just want it to be over.

Getting fast, being able to hold more presents, increased luck, extra hearts, all of these statistics are supposed to help with a task that’s already extremely simplistic. For added difficulty, there’s Hard World but it’s not the ease or challenge of ToeJam & Earl that’s the problem. It’s that fact that the game is incredibly dull.

The best part of ToeJam & Earl are the moments where you’re running through the HyperFunkZone until the time runs out (trying to avoid traveling through an exit by turning into a ball) and learning/creating your own dances during the Rhythm Matching game you can do after putting a coin in the meter next to the boombox and Funotronian. These are pretty basic but they’re among the only interesting moments the game has to offer.

The Earthlings are a random compilation of whacky ideas tossed together in one world that helps keep things fresh in terms of who you’re up against. All of them attack/help you in ways unique to their personas. For instance, the Jetpack Santa will drop a present if you reach him before he flies away. Meanwhile, the cow ghost will do damage by possessing your body.

A few times, these creative choices become a bit cringy in how modern and judgemental they are. Selfie Person (has the scientific name Narcissus Photographem) will hurt you because the flash from her camera damages your skin. Texting Person (textingus idiotus) will run into you because they never look up from their phone. And Cosplay Nerds (Embarracus Awkwardicus) will let you roll some dice for win something from them. These are just a few obnoxious characters among over 50 Earthlings but when paired with the fact that the game’s easy and very easy modes are called Easy Farty and Toddler, respectively, it serves as a reminder that some things from the 90s should stay there.

We Don’t Really Want the Funk

Co-op makes the game less of a slog but fun is a strong word to describe ToeJam and Earl. The game is slow-paced and is meant to be played with a “leave no stone unturned” mindset but with enemies hiding in the same trees and shrubs you’re supposed to shake and search for items I’d rather just get out of here.

Still, the co-op feature does improve the experience and supports both shared and split-screen. Players can even be on completely different levels while adventuring together. By far, this is the most impressive aspect of the game. And the fact that players can revive each other makes getting hit by enemies less stressful.

ToeJam & Earl’’s familiar gameplay elements and pacing ultimately hold the entry back but longtime fans might find comfort in the familiar. Unfortunately, 28 years after the first game’s release means doing more of the same won’t necessarily get the same results. Some may claim ToeJam & Earl: Back in the Groove is an acquired taste but, even if that’s true, it’s not a taste worth acquiring. ToeJam & Earl may have been rogue-like before the community coined the term but that doesn’t make its bad ideas good. This franchise is washed; it’s a nostalgia trip that falls and hits almost every step on the way down.

Previous articleA Plague Tale: Innocence is Delightfully Dark & Tense [Preview]
Next articleDarksburg Trailer Showcases 4 Player Zombie Horde Action
Janet Garciahttps://www.youtube.com/channel/UCnfZ6eVYE4X2dzDixD5cNrw/featured
Janet Garcia is an editorial writer with bylines at IGN, Kotaku, and more. Her favorite genres are platformers, puzzle games, and simulators but in reality she spends most of her time playing FIFA tournaments in her apartment.