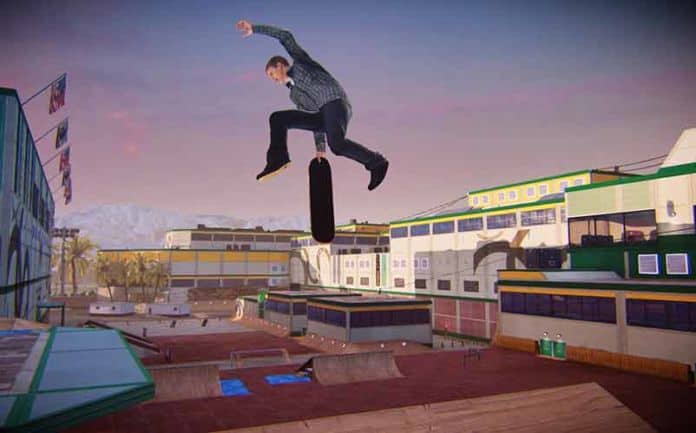 Today, while we were all paying attention to Twitch for Nintendo and Square Enix’s E3 2015 press events, Tony Hawk took to YouTube to reveal our first look at Tony Hawk’s Pro Skater 5 gameplay. Check it out below before I start discussing it.

Okay, now that you’ve watched the Tony Hawk’s Pro Skater 5 gameplay, let’s talk about how god awful it looks. When we first saw screenshots of the game a couple of weeks ago, we were surprised at how bad the graphics looked, and were hoping it was just a fluke and we’d see something better at E3 2015. Unfortunately, that’s not the case, and the gameplay that Tony Hawk revealed looks…not so great. The animations look off. For example, it appears as though when you’re grinding you are simply floating on the rail. There’s a moment where you flip over a fire pit, and your board catches on fire, and your board appears to float on the ground afterwards. Seriously, it looks awful. Most importantly, the gameplay looks dated. From what we understand, Robomodo has added some new features like the ability to actually push when you’re playing, as well as the removal of the limited time frame for using your filled special bar. What’s more is that, according to IGN’s first hands-on impressions, Robomodo is actually aiming to “make the game easier to pick up and play.” An EASIER Tony Hawk?

Even more troubling is that we’ve only seen old maps (like Warehouse and School) from previous THPS games. Why aren’t we seeing new maps at all?

Tony Hawk also confirmed the Tony Hawk’s Pro Skater 5 release date on Twitter just a short while ago, and we now know that the game will be released on September 29, 2015 for PS4 and Xbox One.

And before I go into my talk about the need for a Skate 4, let me note that I’m well aware that THPS is intended to be an arcade skateboarding game, while Skate goes for realism, so comparing them is a bit tough. That’s not what I’m doing, here. But the natural instinct when talking about the THPS franchise is to delve into the other skateboarding games, like Skate.

After Tony Hawk’s THPS 5 gameplay reveal today, it seems pretty clear that this isn’t what former fans of the franchise want. Even if you read the comments on YouTube or any any article on the web that has mentioned the new gameplay, you’ll note the overwhelming distaste that has been left in the mouth of gamers. THPS 5 is now getting shit on by the vast majority. There are those that are saying that we need to wait to see more, but here we are in June, and the game is scheduled to be released in September. For those keeping score at home, that gives developer Robomodo less than three months to clean it up, and that’s not an appropriate window. I wanted so bad for Tony Hawk’s Pro Skater 5 to be good, but’s it doesn’t look like that is going to happen, unfortunately.

What we need now is Skate 4. EA still owns the licensing for the Skate franchise, even though EA Black Box is no longer with us. It is a huge surprise to me that Skate 4 wasn’t announced at E3 2015, as it seemed like a prime opportunity for EA to put the THPS franchise out of its misery later this year. At this point, I’m seriously beginning to doubt that EA will ever plan to release a new Skate game for Xbox One and PS4, and that apparently means the end of skateboarding games.

Why the Tony Hawk Franchise Doesn’t Die With Robomodo