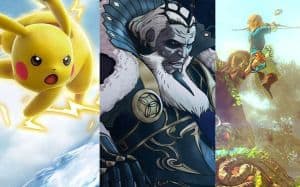 Nintendo is the beloved gaming company we all grew up with. From hours spent catching Pokemon on our Game Boys to playing Mario Party on the N64, Nintendo almost always delivers with its games and long-running franchises. Keeping in mind the recent release of Xenoblade Chronicles X, there are many more long-awaited titles to be released in 2016.

Next year may very well be the company’s time to shine, especially with the probable release of the mysterious Nintendo NX. Below is a list of highly anticipated Wii U and 3DS games that are to be released in North America in 2016.

So without further ado, here are the top 10 most anticipated upcoming Nintendo games of 2016:

When Fire Emblem Fates was announced last year, it was a bit of a surprise. Fans did not have any idea that a new Fire Emblem game was coming out so quickly, a matter of months in Japan since the initial announcement. Fates is one of the best selling 3DS games in Japan, having two branching stories in which players must chose between their adopted or blood-related families. There are several new features added since Awakening, including building towns, new classes, and a more in depth relationship system. Like the Pokemon series, there are three versions of the game, Birthright and Conquest, as well as a third route through DLC. In fact, we have 8 reasons to be excited about Fire Emblem Fates.

The Legend of Zelda has a long history with Nintendo, being one of, if not THE most popular franchise of the company. Although there have been several remakes and releases lately, it has been quite awhile since a completely new Zelda game hit the market. Although there is not too much information about it yet, the new Zelda game shows off an HD open world, and is to be released for the Wii U. It has already been delayed once, but it’s supposed to be released next year. Hopefully there will be more information soon in the future Nintendo directs. The Legend of Zelda Wii U is probably our MOST anticipated upcoming Nintendo game of 2016.

Everyone thought FE x SMT was cancelled after long periods of silence and rumors about the development of the game. However, in a surprise turn of events, FE x SMT was still a go, but in a completely different way than the fans expected. The trailer a few Nintendo directs back showed an almost entirely new project, featuring a plot with performers and the entertainment business. Many fans didn’t seem to take the announcement well, since it was more like Persona than the mainline SMT games. However, another Persona-like game with FE heroes by the developers from both series looks absolutely amazing. If you are are a fan of both or the more recent Persona/FE titles, Illusory Revelations is definitely something to be hyped for with fun turn based combat, the weapon “rock-paper-scissors” system, and the many elements of the game. It is going to be released in Japan in a few weeks, and hopefully soon in the West.

There has not been a new Star Fox game in a very long time, minus the 64 re-release for the 3DS. However, this past summer, a completely new game was announced. The new title will feature the characters and vehicles from the previous games, as well as a brand new story and other additions. The Wii U gamepad will play a huge role in controlling the ships.

The long anticipated, sequel to Bravely Default, titled Bravely Second, is to be released next year. The sequel is set in the same world as the original game, taking place a couple years after. The land of Luxendarc is explored, as well as the hunt for Anges after being abducted. The game has received great scores in its Japanese release, and is sure to do the same when it comes to the West next year.

The Project X Zone series is one of the largest mashup crossover RPGs to date, featuring fun SRPG combat, as well as a large cast of characters from several games. The insane, over the top story actually worked for putting so many different characters in one context. The combat is really fun as well, combining tactics with fighting game style combos. The sequel, set to be out this winter, has awesome cast editions to the series. Fiora from Xenoblade Chronicles, Phoenix Wright and Maya from Ace Attorney, as well as Lucina and Chrom from Fire Emblem Awakening have been announced, adding more Nintendo representation to the new game.

7. Shantae Half Genie Hero (Wii U)

Shantae, one of the most underrated Game Boy games, has grown a larger fanbase recently, especially with the console releases. The Kickstarter funded game is going to be a multiplatform release, due out in early 2016. In this game, you can play as Shantae,  a genie who can transform into many monsters in order to pass levels and fight enemies. In this new installment, players can also play as the nemesis, as well as Shantae’s three friends, each with different kinds of fighting. This was yet another game that was delayed, but is expected to be out shortly.

Although the original Hyrule Warriors hack n’ slash Zelda spinoff was released last year, Nintendo announced a 3DS port of the game that has already became an anticipated game for this coming spring. Hyrule Warriors is a crossover between Dynasty Warriors and Zelda, featuring several playable characters and objectives. The 3DS port is updated with additional story, new characters from other Zelda games, and the adorable Linkle, a female version of Link. It’s a great choice for fans of the spinoff who want the game on the go, as well as those who missed out on the release due to it being a Wii U exclusive.

Game companies seem to be marketing mobile games, which hasn’t had the best response from gamers. However, Pokemon GO seemed to change more than a few people’s minds when a trailer of the augmented reality battle system was released earlier this year. The game will work with a device that “tracks” real world Pokemon, which can be anywhere in the world. Capturing, trading, and battling will occur through the screen, making it appear that Pokemon are actually around us. This is the closest thing to Pokemon being real, and it will be a blast when it releases.

Pokemon have been in Smash, but there are so many other Pokemon that it is surprising that a Pokemon fighting game has not been released yet (other than Stadium /Battle Revolution). Well, Pokemon do fight each other in the main series, but instead of an RPG, what would it be like with fighting game combos and moves? Pokken Tournament is the answer. Featuring ten characters and assists, this game is a Tekken-style fighting game that looks absolutely fantastic. It’s been highly anticipated by fans since its announcement, and it’s one of our most anticipated Nintendo games of 2016.

Top 24 Most Anticipated Upcoming Games of 2016