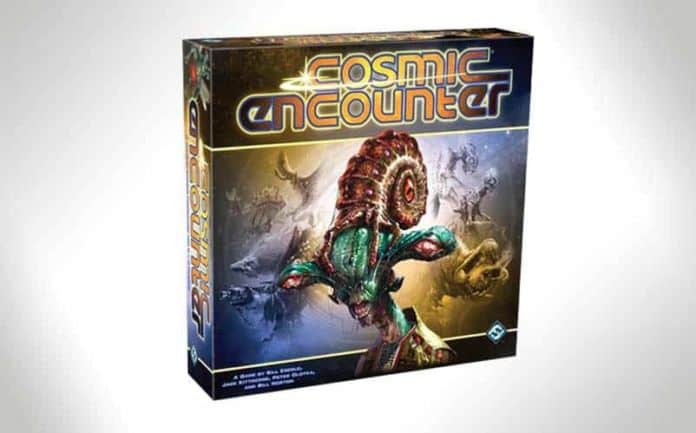 There’s nothing we love more than alien wars, at least, alien wars in a sci-fi setting (we don’t want real alien war — make peace, not war, we always say). Board games are also something we hold dear, and when you combine the two, magic happens. Check out Cosmic Encounter, a game that tasks players with taking their unique alien race to victory by creating colonies on five foreign planets.

In this alien-themed board game, no two sessions are ever the same, and one of the unique aspects of the game is that multiple people can earn a victory (through strategic alliances made throughout the game). The game plays out over a series of rounds, with each round having seven phases (take THAT, Catan!), but they’re not confusing or easy to forget, since you have them on a card in front of you.

Each round starts off with a player drawing a card which determines another player for their alien colony to have an encounter with. Then, the player chooses the number of ships to send to their potential enemy’s homeland, with other players being able to assist. The active player and the defending player choose the type of encounter based on the cards in their hand. It’s possible that not every encounter leads to war, but if it does, the alien army with the greatest force gains the victory. If the attacking player is successful in overtaking their foe, they gain a colony on the defender’s planet, but players can find another way to resolve conflict through other agreements, including trading cards, gaining colonies, or some other agreement for a future round.

But, there’s more to the Cosmic Encounter game than just that. The game has 50 unique alien races, each of which has their own special abilities, such as Observer (which allows players to send their ships back home after a battle instead of them being wiped off of the board) or Tic-Toc (which means players instantly win after 10 successful encounters). Yowza, so much to think about.

It’s a game about strategic team-ups, back alley high-fives, and double-crossing your closest friends, and for this, we absolutely love it. If we’ve caught your attention, you can read more about the game here.