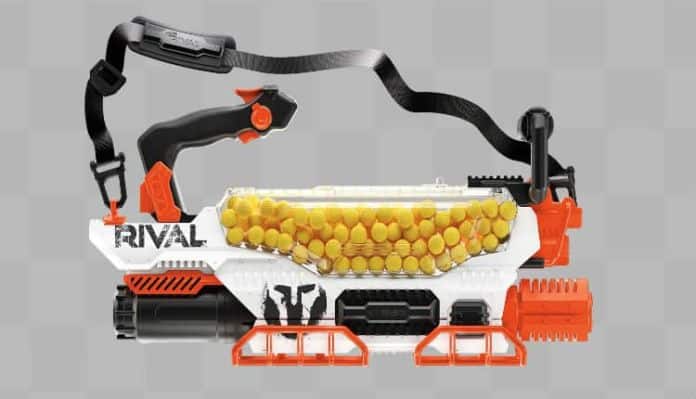 If you’ve ever wanted to pelt your friends, family or foes with a barrage of soft squishy balls – Nerf has the product for you. The toy manufacturer unveiled a new addition to their arsenal in the Nerf Rival Prometheus MXVII-20K. And it’s pretty damn impressive.

Set to be shown off at Toy Fair 2018, the Nerf Rival Prometheus MXVII-20K is the evolution of the previously released Rival Nemesis MXVII-10K. There are several advancements in design. The size of the hopper, for one, is doubled. The Nemesis utilized a 100 round hopper while the Prometheus will be capable of holding up to 200 rounds of Nerf ammunition.

The Prometheus also sports an “advanced acceleration system” that allows the gun to churn out up to 8 rounds per second. During a recent test done by Popular Mechanics, the battery-powered automatic was found to be capable of unloading all 200 rounds from the gun within 36 seconds. Impressive stuff.

As mentioned, the “weapon” is battery powered. The Prometheus allows for interchangeable rechargeable battery packs and comes with a wall charger to refuel your havoc-inducing toy.

Rounds fly out of the Prometheus at an astounding rate too. The yellow bullets coming from Nerf’s latest can hit speeds of up to 70 mph. That equates to about 102 feet per second out of the barrel. Your targets will never see it coming.

The cost of the Nerf Rival Prometheus MXVII-20K is a bit steep though. The toy is being marked at $200 (now on sale for $147.10). However, if you’re seriously into your Nerf shootouts, artillery doesn’t get much more impressive than this.

A second device was showcased by Nerf ahead of the Toy Fair too. The Nerf Rival Phantom Corps Hades XVII-6000 is a bit more conservative at a $70 price point. The Hades is a single-fire blaster which more about accuracy than sheer rounds fired. And while it’s more methodical with its single shot, those single shots come with some heft.