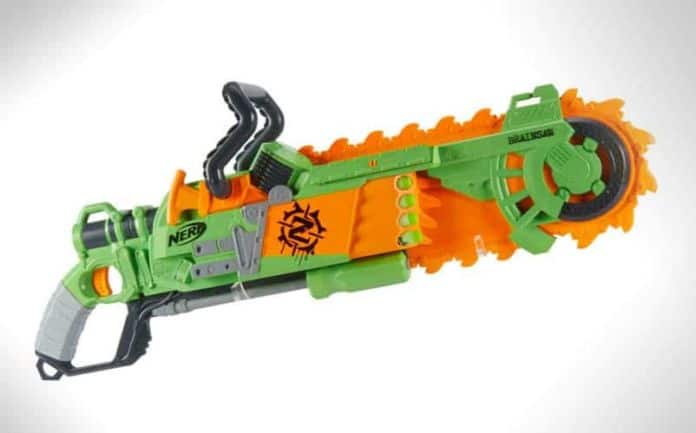 Just when you think the innovation at Nerf couldn’t possibly go any further, the company drops a bomb on us that blows us away. Introducing the new Zombie Strike Brainsaw Blaster, which includes a spinning foam chainsaw — a WORKING. FOAM. CHAINSAW.

Nerf announced [via Popular Mechanics] the gun ahead of Toy Fair 2016 that will be held in NYC next month, and the gun has a look that’s clearly based on the Gears of War chainsaw gun (and other post-apocalyptic guns of the same nature). Of course, it takes a kid-friendly design spin by being plated in orange and bright green plastic. Sure, we’ve seen plenty of replica chainsaw guns, but they don’t actually work as they should — this one does.

The Brainsaw Blaster also fires eight foam darts from barrels on either side of the gun. It’s just one of the many new Nerf guns available this year. It’ll be available in the fall for $30 MSRP, which means it’s going to undoubtedly be one of the best nerd gifts come Christmas time.