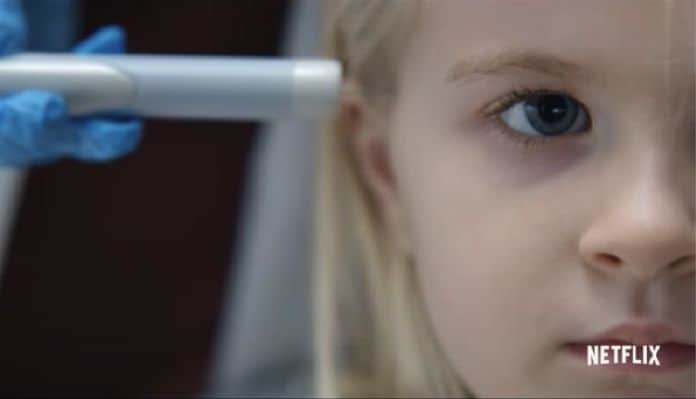 Arkangel is an episode of Black Mirror that touches on far more real topics than the morality of AI technology. This episode (season 4 episode 2) begins with a first time mother having a c-section. She obviously terrified, but the nurse tries to reassure. Her baby is soon held aloft by the doctor, but she is silent, neither crying nor breathing. The mother panics, of course, until a short moment later when the cries of her daughter ring through room. Infinitely relieved, the mother holds her daughter with clear reverence and gratitude.

The episode then cuts to the daughter, Sara, at least 4 or 5 years old now, being fed by her grandfather. Sara isn’t too keen on eating but her grandfather does his best turn it into a game. It doesn’t work and Sara is clearly having too much fun watching grandpa try so hard.

Her mother, Marie, comes in and scoops her out of the high chair so that they can go to the park. The park turns out to be close by, but on the way they must pass a wire fence behind which a dog (German Shepard) barks loudly. Sara looks uncomfortable and starts to whine at this, so Marie decides to cross the street quickly, away from the dog. Remember the dog, that will be important throughout this entire episode.

Marie and Sara arrive at the park and Sara wastes no time going to play. We see her play on the slide for a bit while another approaches the park. Marie and the other mother talk, with Marie half-turned away from Sara. It is at this point that Sara crawls through one of those artificial tunnels and sees an orange cat. Sara pets the cat gently but of course, the cat takes off. Unfortunately, Sara follows the cat.

Marie doesn’t see this altercation and turns, calling to Sara. Sara seems to be out of hearing range in no time and Marie begins to panic. As evening falls, Marie and few neighbours are out looking for Sara and calling for her. Just as Marie begins to truly panic, the husband of the mother she had been talking in the park, finds Sara by the railroad tracks. 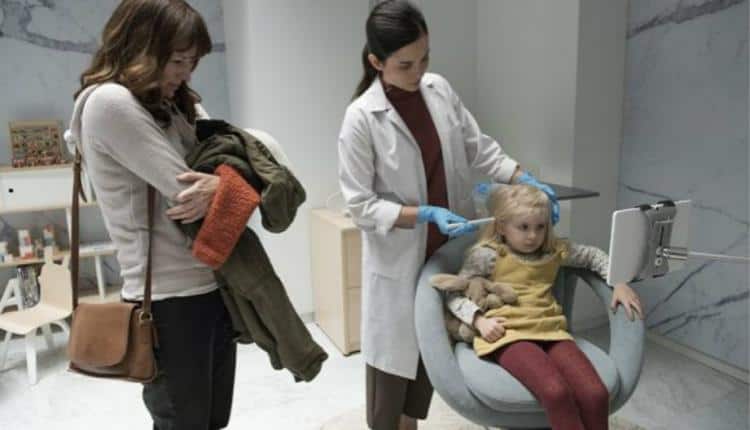 Marie is heavily affected by this, as the very next shot we see in the offices of Arkangel. Arkangel is a micro-technology that is inserted into a child’s brain that sends a variety of information to an Arkangel specific tablet. After all is done, Marie can not only see where Sara is at all times through a GPS tracker, but she can also see Sara’s vitals (turns out Sara is low in iron, which the administer makes a very judgemental comment on), and with the tap of a button Marie can “rely her optical feed.”

With the tablet, Marie can watch everything Sara sees through her eyes. If that wasn’t a step in the creepy direction, Arkangel has something called a filter. This takes note of Sara’s cortisol levels (a hormone that is released when we’re stressed and in reaction to hypoglycemia) and if the filter is turned on, it will blur out and muffle anything that is causing the increase.

If you know even an inkling about child psychological development, you can guess what is going to happen to Sara’s psyche. There are few inciting incidents that turn this episode from something somewhat understandable to downright wrong. First, the dog Sara must walk by to get to school everyday is blurred out and muffled. For most people, this is an apparently benign censorship. It’s easy to get used to barking dogs later in life, there’s no reason for a child to experience that fear so young.

This is a thought process that is utterly incorrect, as evidenced by the escalation of the other incidents. The second incident occurs when Marie is at work and Sara is left in the care of her grandfather. They are in the midst of painting when the grandfather has a stroke. 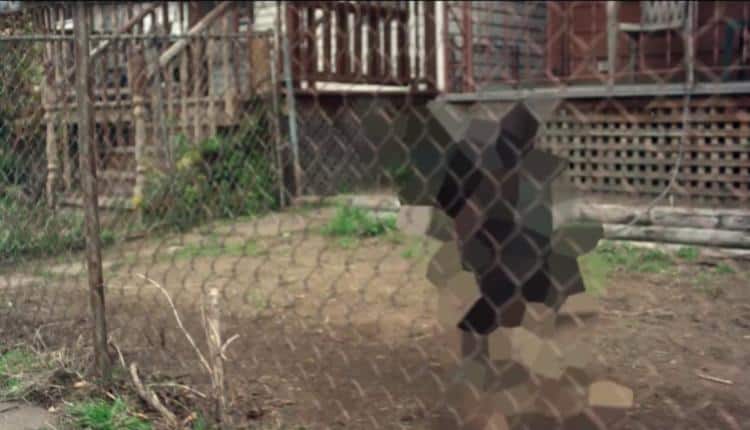 He tries to warn Sara to tell her to call her mother, but of course, the filter has him blurred out and muffled to Sara. Her mother catches the incident on her break, however, so the grandfather is eventually taken care of. Unfortunately, he dies a few years afterwards. This leads us to the third incident, in which Marie takes Sara to the grave of her grandfather. Marie is clearly weeping over the grave, but Sara doesn’t see or hear it.

Sara is about eight years old at this point and it is achingly clear what is wrong with this idea of putting a content filter on a child’s life. One might say that, again, Sara is too young to be confronted with the mortality of her family members and herself. I counter this argument with next incident in which Sara begins to stab her hand repeatedly with a sharp pencil.

Not understanding negative emotions, nor being confronted with her own mortality, is exactly what caused these actions. If Sara’s mother had not stopped her, Sara could very likely have killed herself or another person. Without the proper emotional and psychological development of negative emotions such as fear, anger, and sorrow, violence is bound to occur. A removal of negative emotion, or emotions at all, is quite literally how psychopaths are born based purely on nurture rather than nature.

In an article by Nancy Darling (a Ph.D. professor of psychology at Oberlin College) titled Psychopaths, Children, and Evil, she discusses the many factors leading to psychopathy, including emotional development via interactions with the parents. She states that emotional development has everything to do with understanding “the pain of those who we hurt” so that we stop doing it. 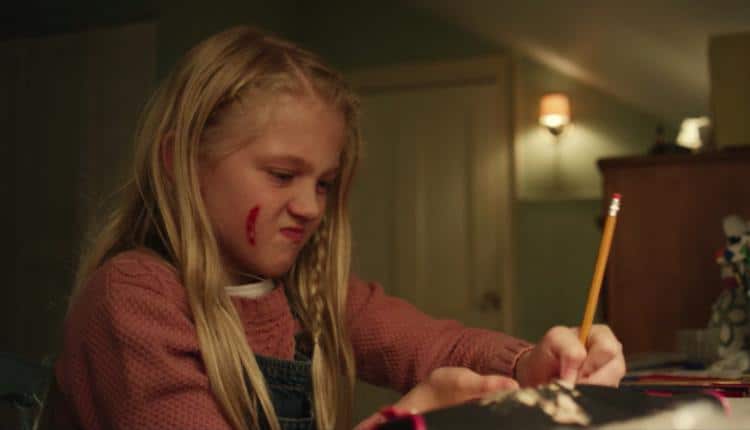 Recognizing negative emotions in parents and other adults is what helps children to respond appropriately. In fact, the concept of I-Messages in the theory of positive discipline stems from the behavioral development method of teaching children empathy. As Thomas Gordon (who coined the term I-Message) states in his book Making the Patient Your Partner that the point of I-Messages is to “share – truthfully and openly – how [their] behavior affects you, both tangible and emotionally.”

Needless to say, emotional development is extremely important in a child’s upbringing and we simply cannot censor all negative emotions and encounters. When Sara’s filter was removed, she is very lucky indeed to have turned out to be a completely normal child and then teenager. Well, normal until the end, when her anger was so great that she struck out very violently. Though Sara certainly had every right to be furious, it doesn’t quite justify her actions towards her mother.

That said, if stunting emotional development wasn’t enough of a red flag for the Arkangel device, the “optical feed” intrudes on the child’s privacy and sense of autonomy. The latter was displayed when Sara asked her mother what hair color the figure she was drawing should have. Though this was certainly a mild version of such a dependence on the parent, it does carry the heavy potential for abuse.

Some parents, if they were able to watch every second of their child’s lives, would happily control everything the child does. Which is something that Marie eventually does when Sara doesn’t come home at the appointed time. Marie discovers that her 15 year old daughter is not only having sex but eventually does cocaine with the same partner. 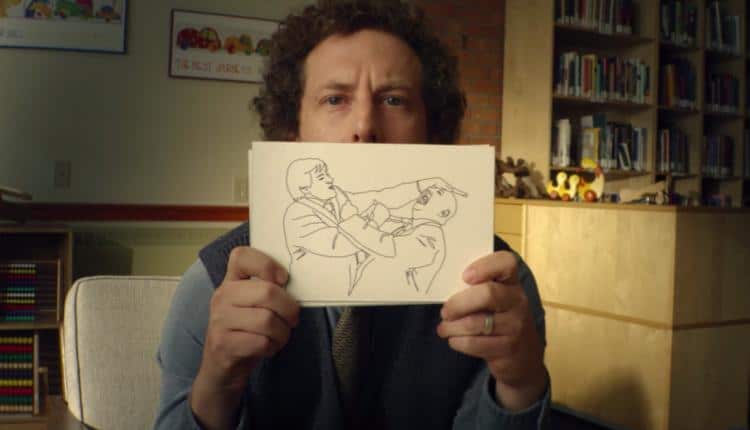 Marie immediately takes action and forbids the boy from ever seeing Sara again. Marie seems almost gleeful in Sara’s subsequent heartbreak, only to suddenly doubt Sara’s reaction to her first heartbreak and thinks that Sara must be pregnant. Marie, not telling Sara any of this, gets an emergency contraceptive and crushes it into Sara’s morning protein shake. Since this makes Sara rather sick, she finds out rather quickly what her mother was up to with the Arkangel system.

All parents want to make sure their children are happy and making healthy decisions, but there is a point where the control this optical feed allows (even without the filter) is detrimental to the child’s development. It is a tough balance to strike in real life, we all want to keep our children safe. If you are at all worried about it, I highly suggest reading up on child psychological development and the theory of positive discipline. In fact, I suggest it even if you’re not, it’s a good read and will help you understand the deeper nuances of what is so wrong with Arkangel.

There is one last aspect that is somewhat minor in comparison to the optical feed and content filter, that is the GPS feature of Arkangel. The technology is not quite there to be safe and reasonable, but steps are being taken. It is a matter of years before we work out the kinks and be able to implant a GPS microchip into your child. At the moment, however, the most we can do is set up the GPS on the child’s phone or buy a dedicated one like FoundMi and attach it to their backpack.

Both certainly have their merits, especially when the child is young and not as cognitively ready to alert the parent when it is necessary. As the child gets older, however, it is paramount that the child is able to remove the GPS to gain a little privacy when they need it. 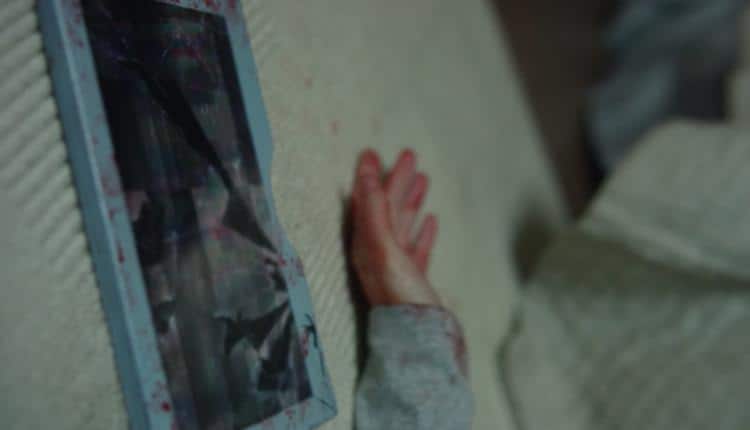 Whatever condition their home life or school life might be, privacy is important. It is an extension of trust on both sides, the parents and the child, and allows the child a measure of independence so that they can experience certain moments on their own. The idea, of course, is to hope that you have taught your child to make smart decisions even if something negative should happen.

As such, the conclusion this episode of Black Mirror wants us to come to, seems to be that parenting is hard and there is very fine balance to be struck. Technology can make that balance harder or easier, it all depends on how the parent chooses to use it. In the episode, Marie clearly went too far on all accounts, but the episode also showed us how understandable her actions were, from what place they came from, as it were.

Again, a balance must be struck and we must remember that parents are imperfect. We will make mistakes and they will have long reaching consequences – the trick is to hopefully keep those consequences to minimum. It’s the best we can do, regardless of what technology we have available to us.