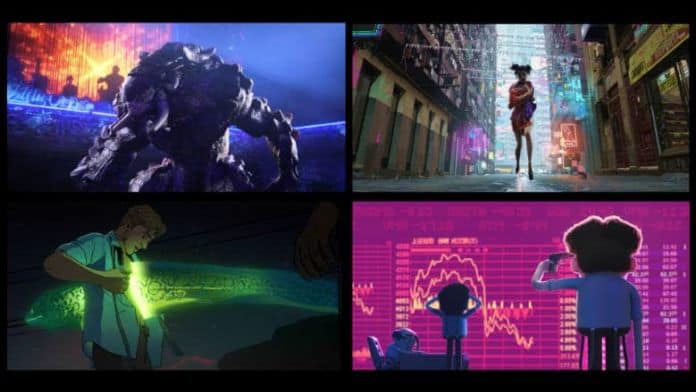 If you’re a big fan of Black Mirror, Netflix just announced a new project you’ll likely be very interested in. Titled Love, Death & Robots, the just announced animated anthology series is looking to tell a collection of short stories that “are intended to be easy to watch and hard to forget.”

Love, Death & Robots comes to us via the collaborative vision of directors Tim Miller and David Fincher. The duo worked to “[unite] a global animation community.” The show will be comprised of 18 different stories. Each “painstakingly crafted, charged with a mix of energy, action and unapologetic dark humor.”

Netflix brags that “the series brings together world-class animation creators and captivating stories for the first anthology of short animated stories guaranteed to deliver a unique and visceral viewing experience.” They expound, saying each episode “draws inspiration from the eclectic and provocative genre material that influenced both Miller’s and Fincher’s formative interests in storytelling.”

Miller also released a quote explaining how important the upcoming animated series is to him:

“Love, Death & Robots is my dream project, it combines my love of animation and amazing stories. Midnight movies, comics, books and magazines of fantastic fiction have inspired me for decades, but they were relegated to the fringe culture of geeks and nerds of which I was a part. I’m so fucking excited that the creative landscape has finally changed enough for adult-themed animation to become part of a larger cultural conversation.”

Whether you’re a fan of comedy, horror, fantasy or science-fiction, you’ll likely find plenty of episodes of Love, Death & Robots that appeal to your taste. And when Netflix declares these episodes as concise, they mean it. Each will run between 5 and 15 minutes in length. And each will bring to your television its own unique animation style with a different team at the helm.

We don’t know when Love, Death & Robots will hit the network, but we do know the series is intended for mature audiences. So put the kiddies to bed before pulling this animated set out of your queue.