10 Lost Video Game Mascots: Where Are They Now? 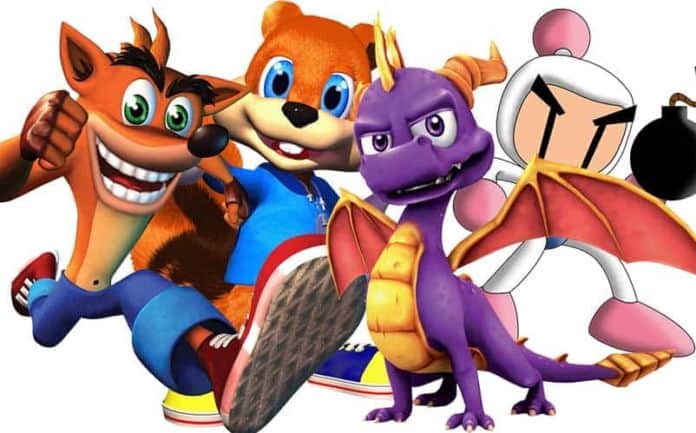 Since the infancy of video games, we’ve seen new mascots come and go. In the golden age of the arcade during the ’80s, arcades were filled with popular and colorful characters like Pac-Man, Q*bert, Mario, Dirk the Daring (Dragon’s Lair), and Frogger. Some of these characters have lived on, while others have remained in the past.

Mascots have been important for the gaming industry, as the best mascots are able to encapsulate a game with their appearance alone, helping to fuel the release of future games in a franchise. Seeing Pac-Man instantly reminds gamers of a ghost, cherries, and power pellets. He was an icon in the ’80s and still is today. In fact, he is arguably the first video game mascot attributed to Namco/Midway’s successful arcade cabinet.

But not every mascot has been as lucky as Pac-Man, Mario, Sonic, Master Chief, or Kratos. Some of these icons have made it big, only to fade into obscurity. Those are the ones we look back on and think, where are they now? Here are ten missing video game mascots and what they were doing when we saw them last:

Sony’s furry bandicoot mascot is a peculiar case. Lately, Crash has been designated to shirts and rumors. Originally, Crash was created and developed by the then independently-owned Naughty Dog while produced by Sony and Universal Interactive Studios. Once Naughty Dog finished the three classic Crash Bandicoot games they were signed on to make, Crash became Universal’s property. Time passed, Crash Team Racing released and in 2000, Universal Interactive Studios became part of Vivendi (which then became part of the now Activision Blizzard). A year later, Naughty Dog was acquired by Sony and Crash Bandicoot became a multi-platform series with Crash Bandicoot: The Wrath of Cortex. Once Crash left his Playstation home, the series took a downward turn both critically and financially.

The last console release for this mascot was in 2008 with Crash: Mind over Mutant, which was not a shining example of how good games in the series can be. The Crash Bandicoot series has been rumored to make a return, but with the rights being in Activision Blizzard’s hands, it is a mystery if he will return to his former glory as one of Sony’s mascots. Still, we’re expecting to see his return revealed at E3 2016.

*Update: There was a Crash Bandicoot: Nsane Trilogy last year, so he’s no longer missing.

Crash isn’t the only Sony mascot to fall into Activision Blizzard’s hands. Spyro had a similar fate, but with Insomniac Games making the first three titles exclusively for Sony. This small purple dragon jumped on the scene in 1998 with Spyro the Dragon and became a household name for any Sony gamer. Spyro, just like Crash Bandicoot, struggled after leaving their Playstation home. Both peaked critically with their third and final installments on the PS1, making it tough for later games to compare. The two icons had their own respective crossover title on Gameboy Advance bringing back memories of their Sony presence.

During the 2000s, the franchise lost critical praise steadily and the last console release, 2004’s Spyro: A Hero’s Tail, was poorly received. Spyro made a comeback of sorts with Skylanders: Spyro’s Adventure in 2011. Skylanders, however, skyrocketed in popularity, and Spyro only became a sort of stepping-stone for the series; it has since been left behind. We aren’t sure what the future holds for Spyro, but maybe we will see him back on a Sony console.

Bomberman is an example of an icon that has found major success since the first game release in 1983 while also keeping a low-key persona. He is currently owned by Konami, and was last seen on a console in 2010 as an Xbox Live Arcade title, Bomberman Live: Battlefest. On mobile, there have been multiple renditions of Bomberman games. However, energy around the releases have been minimal. There was excitement around his potential inclusion in Super Smash Bros for Wii U, but that was stamped out once Bayonetta was announced as the last inclusion in the roster.

Update: There was a Bomberman Switch game last year, so Bomberman is no longer missing.

Another iconic character that was buzzed about as an addition to Super Smash Bros. was Rayman. With a game named after him, he was originally created in 1995 for the Atari Jaguar, PS1, and Sega Saturn. A creation of Ubisoft and their longest running series, Rayman has found a lot of success across 23 platforms. There have been multiple Rayman spin-offs, with the Rabbids series, and it was also re-released for iOS and Android. He quickly became a mascot with a quirky design, having no arms, legs, or neck, and found himself traversing through ridiculous environments with goofy side characters. 2013’s Rayman Legends (which we included in our list of the best couch co-op games for Xbox One and PS4) was the last console release for this icon, and we eagerly await a possible sequel or new addition to the franchise.

During the 1990s, we found ourselves surrounded by character clones, goofy designs, and boring casts. Whenever a good character came around, it was exciting, and if they were unique enough, we would hope they’d become staples of their respective console. Gex is an example of a mascot that had potential, but was then given the boot fairly quickly. He was a secret agent lizard that mocked the genre he was in, and could kick some serious butt. Gex was originally the mascot for the 3DO, a fairly unsuccessful console that released in 1993.

The release of Gex in 1995 made it the best selling 3DO game, and it created a potentially legendary lizard that could have been the next best thing. The series eventually made his full 3D move to the N64 and PS1, where the lizard ultimately fell short and disappeared entirely after 1999’s Gex 3: Deep Cover Gecko. Square Enix eventually acquired the rights to Gex and has since announced the possibility of a reemergence from other developers.

The Bubsy series started in 1993 as a traditional sidescrolling platformer starring a furry mascot with the power to fight off an evil alien race. He became the cat to watch, hyped up to be the next Sonic or Mario. The character never lived up to the aspirations many had for him, though. A sequel was released a year later with moderate success, and later that year, Bubsy found a home with the Atari Jaguar. The console ultimately became a commercial failure and was Atari’s last gaming system.

Bubsy tried to cling to life on the PS1 with Bubsy 3D in 1996, but it was beat-up by critics, and it is seen by many as one of the worst games ever made. Bubsy is an iconic character many verbally trash these days. However, with the re-release of the original two titles on steam in 2015, we know there is still love out there for that wild cat.

Conker has mysteriously been absent for many years. Created in 1999 with Conker’s Pocket Tales for the Gameboy Color, he has only had three games of his own. There may only be a few games in the series, but Conker, nonetheless, is an icon for standing-out during a generation full of tame 3D platformers. When the series was introduced to the N64 with Conker’s Bad Fur Day in 2001, it included violence, poo jokes, and tons of cursing — something that was not normal for a furry character on a Nintendo console. In 2005, Rare, owned by Microsoft, released Conker: Live & Reloaded that was a remake of Bad Fur Day with the addition of a new multiplayer mode. In actuality, there has only been one definitive Conker game for consoles, so fans have been on the edge of their seats for a long time wanting a new addition to the series. There is recent footage of an upcoming HoloLens game called Young Conker, but with such a strong fan backlash, we wonder if it will even see the light of day.

Rare has changed a lot since Microsoft bought them back in 2002, and this could be the reason why we haven’t seen much from Banjo or Conker. Banjo-Kazooie, which first found life in 1998 on the N64, has had more luck than Conker with five total games. Banjo-Kazooie and Banjo-Tooie for the N64 are highly received critically, and are the games that turned a honey bear and his red bird friend into icons. After the N64 titles, the series includes two Gameboy Advance games, and Banjo-Kazooie: Nuts & Bolts on the Xbox 360 in 2008.

With the upcoming spiritual successor, Yooka-Laylee being created by the original designers, there is still hope in a revival of the series in a sense, sadly excluding the classic bear and bird duo. Both Conker and Banjo-Kazooie’s games found their way onto last year’s Rare Replay for Xbox One, which has been fuel to the fire for fans that want new releases for these classic video game icons.

Duke was the poster child for cocky, selfish, kick-ass gaming in the ’90s. First created in 1991 as a sidescrolling PC shooter, Duke didn’t stand out among the competition. The Apogee Software (now 3D Realms) character flourished in 1996 with the third installment that took things into the third dimension. Duke Nukem 3D brought this wise cracking killer into homes across the world. With a large arsenal at his disposal and tons of hidden jokes throughout each level, Duke became a mascot for the first person shooter genre. He was coolest guy around, and everyone was excited for his next game.

Sadly, delay after delay after delay caused the game to go from hype machine to a joke among gamers. Moving from one engine to the next, Duke Nukem Forever was stuck in development hell. Publisher issues, financial problems, and marketing shams plagued this released, and for many, it was a game they thought never would happen — that is, until 2010 when Gearbox stepped in. 3D Realms had just been downsized and internal development had stopped until Gearbox took over and finished the game with the previous team. Duke Nukem Forever released in 2011 to a sad reception. Critically, it was panned, and Duke’s future has been up in the air since. During the development of Duke Nukem Forever, there were several spin-offs that included third person shooters and mobile games, but those never fit in with his iconic FPS persona.

In 2004, the world was graced with Katamari Damacy on the PS2. This Namco game was originally created on a small budget with little anticipation for it becoming a hit. With an insane story, goofy gameplay, and ridiculous music, the game quickly gained tons of fans and became a game everyone wanted to try. The crazy nature of the game became a series staple. Rolling up a ball (a katamari) as big as possible out of completely random objects to then turn it into a star sounds insane, and it sure is fun.

The two main characters, The King of The Cosmos and the Prince became mascots of random crazy fun. The franchise has been fairly successful with 7 games in the series, including mobile releases. However, the last game released on consoles was in 2009 and it was only a compilation of levels from previous games called Katamari Forever. The future of these ridiculous characters is unknown, but with the 2016 release of an iOS/Android edition gives us hope that they are not truly forgotten.

Previous article90s Cartoons Meets Marvel v Capcom Mash-Up
Next articleWhat is the Best Fire Emblem Fates Ending: Revelation, Birthright, or Conquest?
Alex Hartwig
Alex has been a nerd since a young age and is finally writing about it. Using his nerd past as fuel, Alex loves to discuss movies, video games, anime, comics, board games, and much more. He works with Garrett Hulfish on The Fishnet and annoys him on a daily basis. You can follow him and his crazy life on twitter at @godzillawizard.