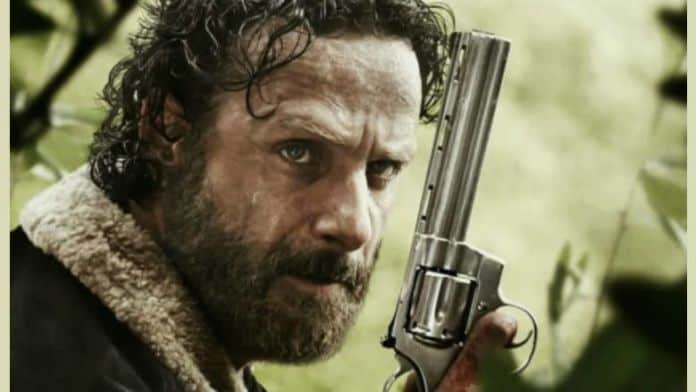 AMC has been hyping up the conclusion to Rick Grimes’ story on The Walking Dead for a while now. Last night was supposed to be the final episode in which we would see Andrew Lincoln as the series’ lead. And it was – but then the studio decided to throw a curve ball at us. Instead of Grimes’ story ending, a new one is just beginning. AMC has announced that they have a series of The Walking Dead movies in the works that will feature Andrew Lincoln returning as Rick Grimes.

We’ve known that the network was working behind the scenes to flesh out The Walking Dead universe. AMC’s CEO, Josh Sapan, offered a quote in September saying “The Walking Dead is a universe…and we have a plan to manage over the next decade, plus. That plan is a careful plan to respect the world of the fans of that world.” Obviously Rick Grimes’ departure from the series and leading a new The Walking Dead movie trilogy is part of that “careful plan”.

The Walking Dead movies will be led by AMC’s Chief Content Officer, Scott Gimple. They’ll be developed under the network’s AMC Studios Original Films banner, with Gimple handling the writing duties. The first of The Walking Dead movies is planned to begin production early next here. Here’s Gimple’s statement following the reveal:

“These films are going to be big evolutions of what we’ve been doing on the show, with the scope and scale of features. We’re starting with the first part of the continuing story of Rick Grimes, and there is much more on the way, featuring yet-unseen worlds of The Walking Dead and faces from the show’s past, as well as new characters we hope to become favorites, told by TWD veterans and emerging voices. We want to break new ground with different, distinct stories, all part of the same world that’s captured our imagination for nearly a decade of the Dead.”

Andrew Lincoln also chimed in after the news broke. While we were all under the assumption that the actor was tired of the role in the show, he apparently wasn’t, stating this is instead just “the end of the beginning”:

“It’s not the beginning of the end, it’s the end of the beginning. And I like the idea that we get to tell a bigger story, maybe with a sort of wider vista. And I’ve always been interested in what’s going on out there, you know, whether or not there is contact with the wider world. I want to know the meta of it all. And I suppose to be able to kind of touch upon that in a contained story for me is a very exciting proposition … Maybe it’s the start of a bigger story.”

It’ll be interesting to see whether AMC goes in the direction that Lincoln suggests, revealing “the meta of it all.” Whatever they do, we probably won’t see it on screens until late next year or early 2020.