I started Seven Deadly Sins with low expectations and high hopes. There were nearly five stars on the screen in front of me for encouragement and yet something about an anime produced by Netflix still filled me with trepidation.

However, now that I have binge-watched over half of the series — twice — it’s clear that Netflix is becoming the king anime. In fact, it’s one of the reasons we believe Netflix is the new king of TV.

Here are 7 reasons we all need a little sin in our lives:

1. It’s based on a highly rated manga series 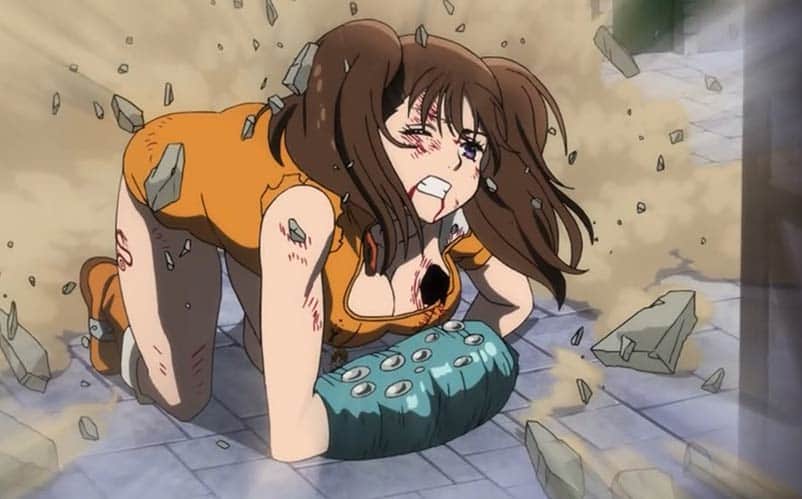 Published in 2011, Nanatsu no Taizai, gained high ratings, progressing from a short 52 issue release into a serialized story starting in 2012. The subsequent graphic novels sold over 15 million copies. An anime was released last year in Japan but this will be the first time the show has been aired outside of the country. The story takes place in a time not unlike the Middle Ages where feared and celebrated Holy Knights ravaged the kingdom, overthrowing the royal family and massing vast armies in the name of war. Young princess Elizabeth fled the royal palace to find a band of outlaws known as the Seven Deadly Sins who she believes to be their last hope. Having been accused of treason, the Sins were scattered across the country, exiled for the past 10 years. Her luck prevails and she slowly stumbles upon the members of the group as the series progresses. With an interesting premise and rave reviews it seems this manga is the perfect backbone for a hit anime.

2. Produced by the same studio that gave us FairyTail 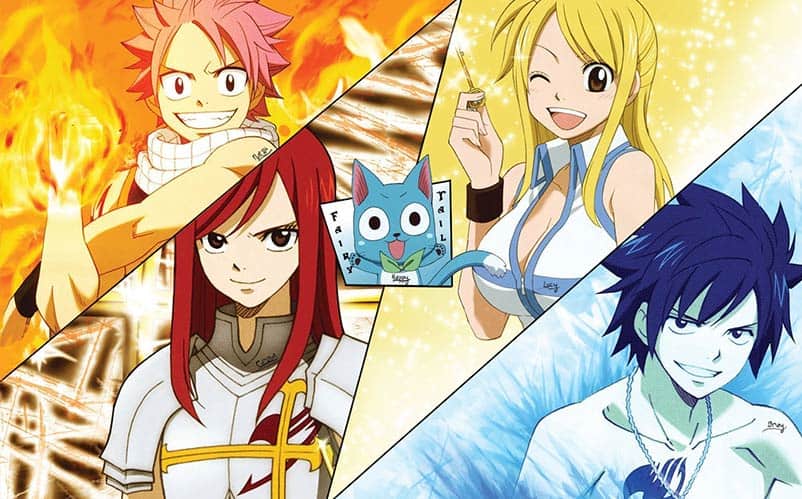 A-1 Pictures Inc. is a Japanese production studio that is best known for its work on the anime FairyTail. Notorious for its humor, action and propensity toward friendship and teamwork, it’s easily one of my favorite shows. Whether or not they meant to, Seven Deadly sins has a flavor of FairyTail. The anime is quirky and funny. The main characters with their sweet looks are deceivingly powerful, attracting many enemies. Each episode is a short twenty four minutes but never lacks in suspense or action. From the first moments, the viewer is drawn into the world of the Seven Deadly Sins. We laugh, we cry and most of all we cheer for the epic beat downs the leader of the Sins, Sir Meliodas delivers (not unlike that of Natsu Dragneel). To top it off, A-1 Pictures Inc. has done an excellent job keeping Seven Deadly sins true to its original story. So fans rejoice you won’t be pulling too much hair out over artistic liberties. 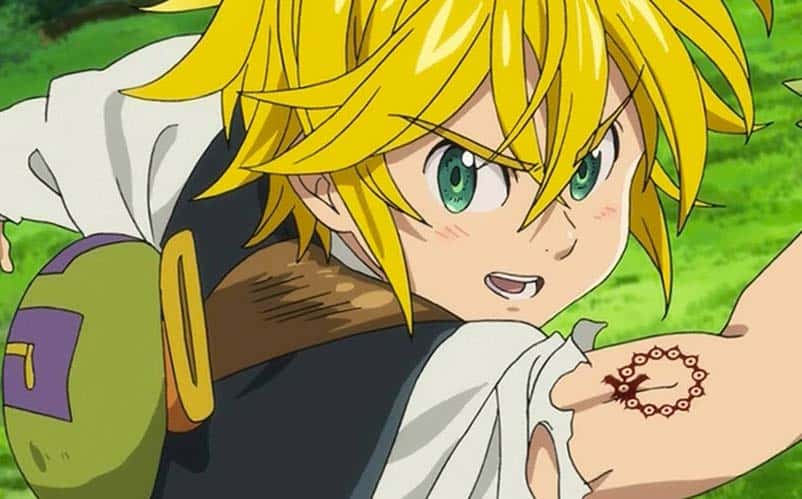 I am a sucker for a good fight and with a plot centered on a holy war; every episode contains an epic battle between our unlikely heroes and their deadly foes. This anime is fast paced. Battles are not dragged out over countless episodes leaving the viewer with a nasty cliffhanger and a feeling that the plot really didn’t go anywhere. Each member of the Seven Deadly Sins is a criminal with a personality matching that of their designated sin so as you can imagine, everyone is hot headed and ready for combat. 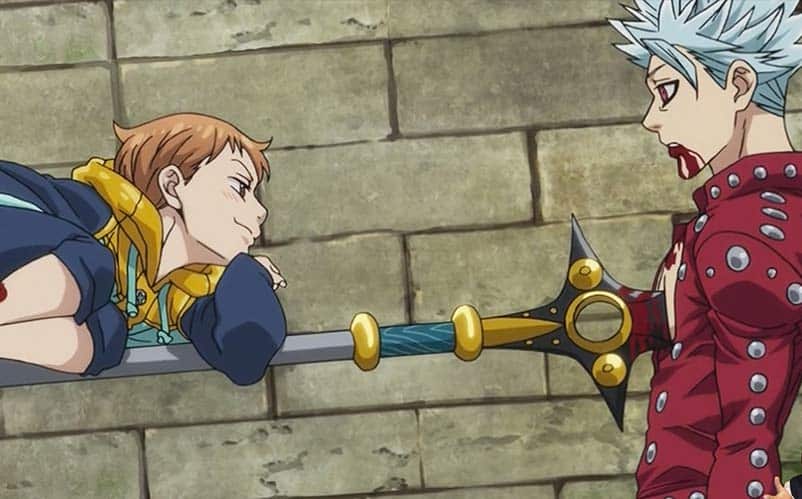 This show is deceivingly grim. The art style is very cutesy, the characters very young, and of course there is a talking piggy sidekick. So at first glance one would assume the show was meant for a more youthful audience. However there is no scarcity of blood and the antagonists are ruthless. The holy knights have no sense of morality. Imbued with the blood of demons, they pursue the seven sins obsessively trying not to just capture them but to end their lives. Their undertaking leads to the death of countless innocent men and women. Even our heroes have a dark side. The title of wrath, envy, sloth, greed, etc. comes from a singular transgression that the individual character committed in their past and the viewer is slowly introduced to these sub layers throughout the season. 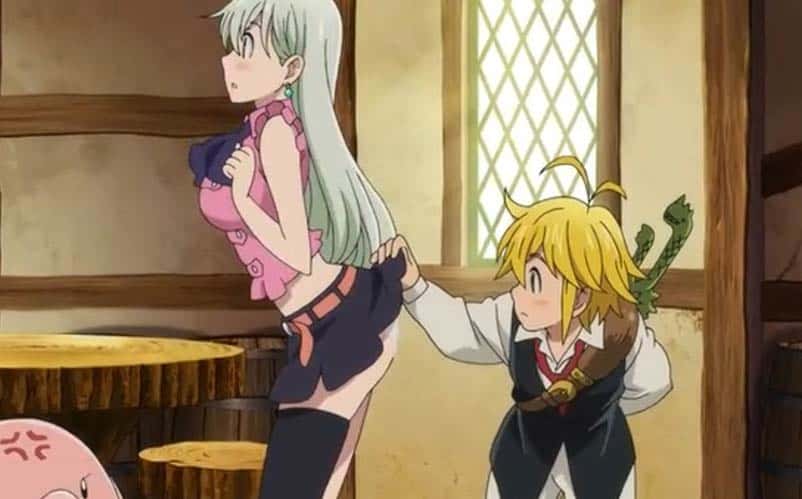 Perhaps my favorite part about the show is the snarky sexual humor. Meliodas is perhaps the main instigator of the banter, being a self-proclaimed panty stealing groper. The viewer gets their first laugh as he pumps Princess Elizabeth’s breast checking for a steady pulse. But it doesn’t stop there, as the series progresses there is no shortage of crude jokes, butt pinching, sexual innuendos and more. Some characters even beg for the harassment. While I am sure some will find it a bit demeaning toward women, the intent is to provide us with a bit of comic relief so that after a viewer has balled their eyes out, they can try to recover with a light chuckle. 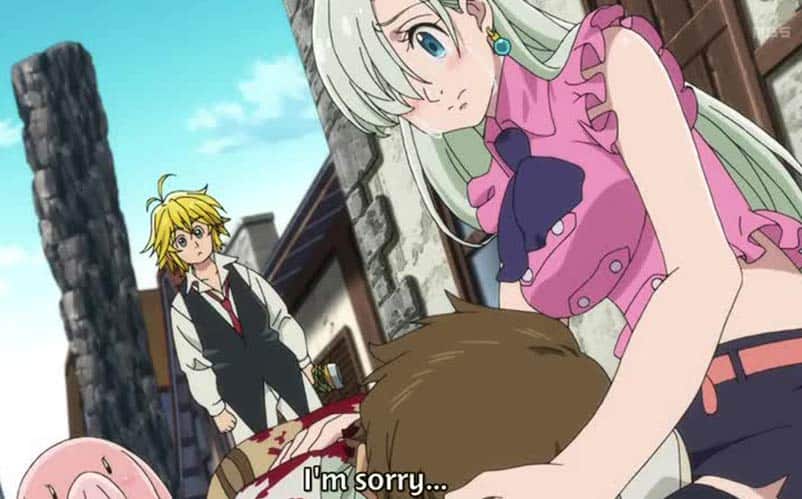 Every good anime knows how to play to the audience’s emotions and the Seven Deadly Sins is no exception. Although the whole show is not too depressing, prepare yourself to cry and yell at your tv screen. Our heroes are not immune to hardships and I find it makes them more endearing. We share touching moments with each of the characters, laying bare their vulnerabilities in direct contrast to their unimaginable powers. It’s humanizing and gives us as a viewer a way to relate to a fictional animated character. 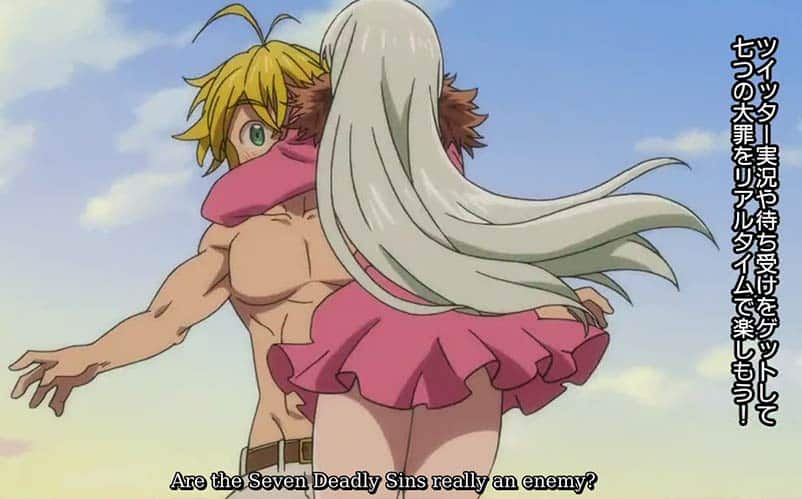 A little romance perfectly rounds out this anime. Not all anime cater to the softer emotions. Many are dark and depraved and offer little in the way of genuine affection. With Seven Deadly Sins we find a timeless love story, a polygonal love triangle, unrequited love, and love long lost. Nevertheless, the show is not overly sappy. The viewer finds themselves rooting for that moment when our lovers finally kiss or crying at the loss of someone special. The romance perfectly mirrors the storyline adding a little tenderness the anime needs to counteract the harsh actions of the evil Holy Knights.