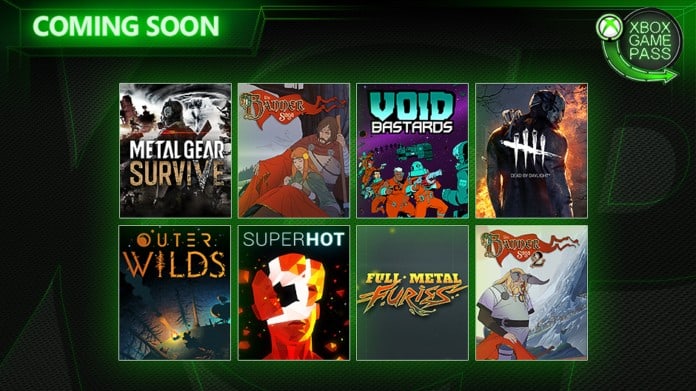 Another month, another slate of fresh content scheduled to arrive on Microsoft’s gaming subscription service. The studio announced their next slate of Xbox Game Pass May and June titles, and there’s a few entries here to get game enthusiasts excited.

On May 23rd the new entries begin to drop with the inclusion of Metal Gear Survive and The Banner Saga. Survive is Konami’s deviation from Hideo Kojima’s Metal Gear Solid series. The title didn’t score very well and was criticized for its story, characters, and inclusion of microtransactions. But it’s still a decent survival action title built upon the solid Fox Engine within the Metal Gear world.

As for The Banner Saga, it’s the first in Stoic Studio’s trilogy of games. The series is designed within the realm of Norse mythology with a tactical RPG feel. The Banner Saga 2 continues the tale and also arrives for Game Pass in June.

The strategy-shooter Void Worlds then hits the service on May 29th. Following that is the fantastic 4 vs 1 multiplayer horror game, Dead by Daylight, which lands on May 30th.

Also on May 30th will be the debut of Outer Wilds. That title is loaded “with secrets to discover and perils to avoid while exploring space.” As we enter June, Full Metal Furies arrives on the 6th. The action-adventure cooperative RPG sports “a unique combat system where everyone is important. Work together to defeat special enemies, string organics combos to deal massive damage, and save a war-torn world that is battling itself to extinction.”

Finally, the super awesome Superhot lands on Xbox Game Pass June 6th as well. The first person shooter is known for “blurring the lines between cautious strategy and unbridled mayhem.” In a twist, the game world only moves when you do. There’s “No regenerating health bars. No conveniently placed ammo drops. It’s just you, outnumbered and outgunned, grabbing the weapons of fallen enemies to shoot, slice, and maneuver through a hurricane of slow-motion bullets.”

That’s all we know of thus for the remainder of Xbox Game Pass May and June. If you’ve yet to subscribe to the service, Microsoft is constantly running discounts to get you on board. Or, you could wait until Xbox Game Pass Ultimate launches later this year.

Previous articleJust Cause Movie Writer Set
Next articleRolliCool A20 is the Best Smart Portable Air Conditioner Yet
Jeff Scott
Growing up a 90's kid, Jeff found his love for gaming during Nintendo's heyday. Because of that, you could (perhaps sadly) call him a "Nintendo Fanboy" to this day.