Why Yuri on Ice Made Anime History 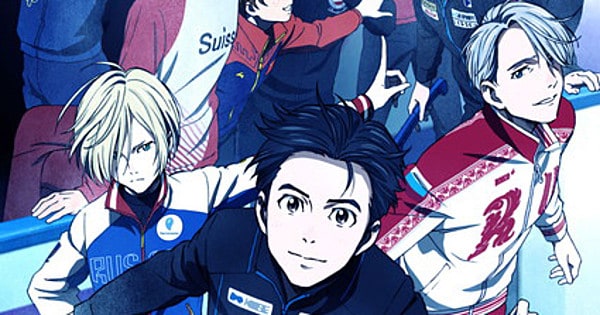 “Dancing on the blades, you set my heart on fire!”

Why have searches for pork cutlet bowls and Figure Skating Grad Prix finals skyrocketed in the past few months? It isn’t because of the cold winter months, but it’s due to the influence of Yuri on Ice, the latest sports anime focused on the usually unrecognized world of men’s figure skating.

There is no doubt that Yuri on Ice has taken the anime world by storm. There are Facebook pages with thousands of fans, several blogs dedicated to the show, and the inevitable crashing of servers every Wednesday on Crunchyroll when it premieres. But why? Although there has not been a figure skating anime before, there are several sports anime premiering every season. There’s a good reason that Yuri on Ice stands out from the rest and why there are several fangirls (and fanboys) swooning over the show.

Yuri on Ice is unique. It blends diversity, well-written characters, the beauty of figure skating, and a realistic LGBT relationship that is done incredibly well for the world of anime.

It all begins when we meet Yuuri Katsuki, a Japanese figure skater who caved during the biggest competition of his life, the Grand Prix Final. The GPF is the biggest event for competitive figure skaters, and Yuuri was really upset that he messed up his routine. After he loses, he isn’t sure what he is going to do with his life since he is getting older for competitive skating and he lacked confidence in himself, which is a really relatable feeling for a lot of us. After he graduates from college, he decides to move back home to see what to do next.

That’s when it begins.

Yuuri always admired Viktor, one of the most renowned figure skaters in Russia and the world. One day, after coming back home, Yuuri decided to skate to his idol’s famous routine, without the pressure of competition. He was filmed, it went online, and then it went viral.

Then, his idol noticed him.

Viktor made a trip to Japan and took on a new role in his life. He was no longer going to be Yuuri’s competitor, but his coach. This was the spark. The spark that started everything.

Yuuri stands out as a main character, which makes Yuri on Ice even more unique. He isn’t someone who just became interested in the sport or a new member of a high school team. Yuuri is a professional figure skater who has potential and is very talented. Instead of the struggle of learning the sport, he deals with something else–a lack of confidence.

Mental stamina in sports is a huge obstacle that is often overlooked. Many times the physical performance of a sport is the main focus, especially for sports anime. This isn’t a bad thing at all, and it is often inspiring to see how teams can perform after many hard days at practice to become stronger. However, what if someone can never miss in practice, but when it comes to competition, they mess up? This is a real problem and struggle with athletes, and Yuri on Ice really handles this well, especially with the main character.

When Viktor comes into Yuuri’s life, he starts to find his confidence. He starts this by choreographing a routine that is the opposite of what is expected of Yuuri, Eros. As Viktor says, the goal of the program to give the audience something they will not guess the skater would choose, surprising them. Although he promised to choreograph rising Russian star Yurio’s program as well, he assigns both him and Yuuri pieces opposite of their personalities, challenging their ability to skate and perform.

Eros is one of the most defining routines in the series. With each time he begins the short program, the audience can see his growing confidence radiate off the ice and into his performance. He perfects his routine and adds a bit of “eros” each time, proving to himself–and Viktor the meaning of love.

Love is the central theme of Yuri on Ice. It is an emotion that is hard for anyone to express, but each character seeks to find love in some shape or form. This especially applies to Yuuri and Viktor and their interactions with each other. Their relationship is a major reason why this anime has received so much attention.

In many anime featuring romances or implied relationships between same sex characters, their interactions are often eroticized or fall victim to what is called “queer baiting”. This means that anime may tease a relationship to appeal to fans of same sex “couples” without the intention of an actual relationship evolving from that. Although many sports anime are great, there are often instances of this in the shows, which is disappointing. However, this isn’t the case of Yuri on Ice, as a relationship comes out of it and it is beautiful.

Yuri and Viktor’s relationship is depicted in a realistic, natural way and it is one of the first of it’s kind. As their romance blooms, you can see them evolve and have a healthy bond with one another. Yuuri, who has always seen Viktor as his idol, finds confidence through him, claiming himself the only one to please Viktor. With this mentality, Yuuri is given a reason to skate, finding a passion and newfound love, which is the theme of his competitive Grand Prix program. After spending time with his coach, Yuuri sets out to show the entire world his love for Viktor, which is evident in the way his skating evolves. Although he still gets nervous, Viktor helps Yuuri in a positive way, helping him love himself and find his strengths.

The relationship is not one-sided either, as Yuuri is a positive influence on Viktor as well. Viktor has been a star and considered the top skater in the world. However, his life lacked variety, and he began to lose motivation. By becoming Yuuri’s coach, he found motivation through helping Yuuri all while falling in love. Yuuri gave him a reason and a purpose.

Another aspect of their relationship is the intimacy shown between the characters. It feels natural, and just the little gestures show how much Viktor and Yuuri care for one another. In no way does it seemed forced, and their reactions and interactions are simply beautiful. From hugs to holding hands and being close, the couple surprised fans with every episode, especially in episode 10. With implied engagements and promises for marriage, the closeness between the two characters is simply a joy to see. Never did I expect to see an anime go this far, surprising us with positive LGBT representation.

Of course, the relationship is only one part of the entire series. The gorgeous animated scenes and ice skating sequences were professionally done, drawing inspiration from real figure skaters.  Yuri on Ice also does a fantastic job of explaining how competitive figure skating works, from scoring to the short/long programs and how skaters qualify. Performances and judging are realistic and mirror actual competitions. It also was a positive representation of men’s figure skating, which is traditionally seen as a more “feminine” sport. Having no knowledge about the world of competitive ice skating, I learned a lot about how it works, and even decided to take it up for myself.

Spotlight is also placed on various skaters from countries all around the world, giving screentime to various characters and developing their stories very well. The other competitors are not just on the ice, they are human and all have intriguing backgrounds and stories. From their thoughts during events to little pieces about their motivations, every character breathes life into this show. Phichit, for example, is a fantastic and funny skater who is connected to Yuuri’s past training in Detroit. When competing, he longs to make history for skating in Thailand, breaking records that no one in his country has done before. He also is the king of selfies, giving him even more personality. Skaters also aren’t perfect. They mess up, even the ones who are expected to win. This makes the competitions even more realistic.

On December 21, we were met with a beautiful finale that showed the results of the GPF, surprising fans again. With the issues resolved between Viktor and Yuuri, Yuuri’s epic performance, a medal ceremony, a twist, and a duet, fans are already longing for a second season.

Was Yuri on Ice a perfect anime? No, as with any show, it wasn’t absolutely perfect, but it’s pretty close to it. With outstanding characters, a positive LGBT relationship, realistic ice skating sequences, and themes of motivation and confidence, Yuri on Ice became a favorite show for thousands of fans.

Yuri on Ice was born to make anime history. If you don’t believe me, go ahead and check out Yuri on Ice subbed on Crunchyroll, and dubbed on Funimation.

Yuuri and Viktor also made it on our list of the top 50 cute anime couples, so check that out.