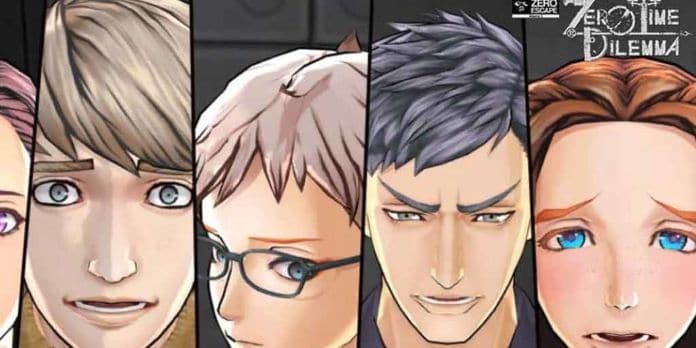 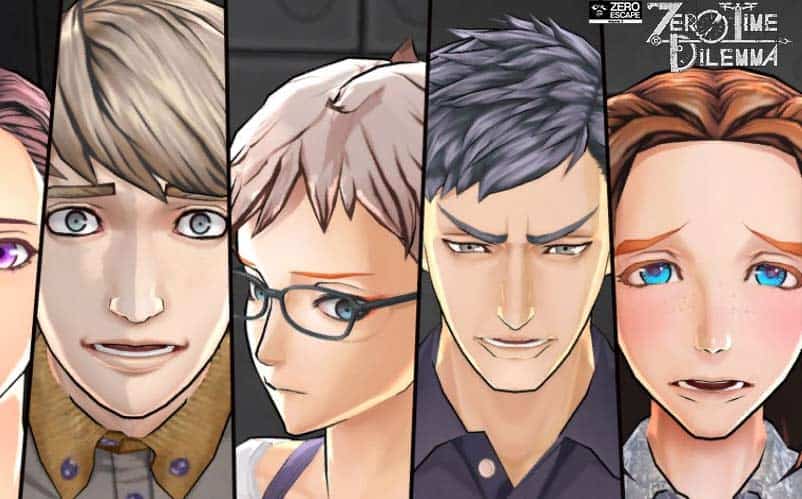 Would you volunteer for a Mars simulation? Nine young adults who signed up for a special experiment meant to monitor the psychological effects of being on our neighboring planet awaken on New Year’s Eve in December 2028, and find themselves trapped in an underground bomb shelter. Their only way out is to participate in the death game known as the Decision Game, led by the mysterious masked Zero.  And one other thing: at least 6 people must die in order to escape, no exceptions. The fate of every character rests in your hands, and especially your choices.

This is the world of Zero Time Dilemma, the highly anticipated latest game in the adventure/puzzle based Zero Escape series. 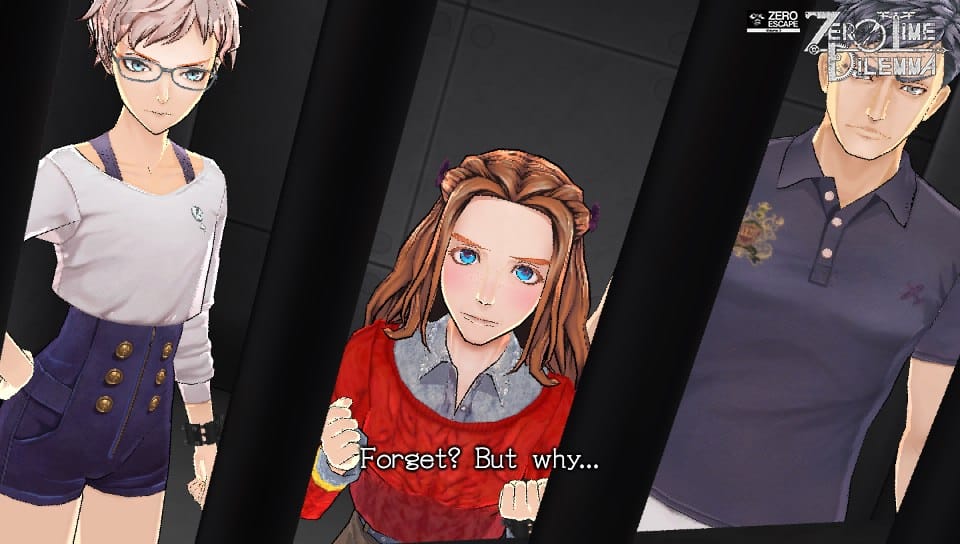 Zero Time Dilemma is the highly anticipated final game in the Zero Escape trilogy. This game was almost not released, but thanks to a fan movement online, it was made possible. Not only does this game feature a completely new setting and new faves, fan favorite characters return such as Junpei and Akane from 999 and Phi and Sigma from VLR.

In our Zero Time Dilemma review, we’ll break down the game as much as we can while dodging spoilers on both puzzles and the narrative so that your experience will be as fresh as it can be.

As stated before, the game takes place in an underground bomb shelter and everyone forced to play the Decision Game, which is even more screwed up and so much more intense than the Nonary game, involving a lot more life and death situations that have bad, good, or really really bad endings depending on your choices. There are three teams with different leaders: D team with Diana, Sigma, and Phi, C team with Carlos, Junpei, and Akane, and Q team with Q, Mira, and Eric. It’s a nice mix of both familiar and new faces, but we’ll get to the characters more in depth later on in the review.

Participants receive a password each time a person dies, called X-Passes. Six X-Passes are needed to escape, which means six of the nine people must die. When I heard of this, I immediately was worried for my favorite characters, which is basically everyone minus some members of Q team.

It’s also worth noting that each player wears a watch, that contains needles that inject participants with memory loss medication every 90 minutes. This results in them forgetting everything that happened in those past 2 hours, which makes for a VERY interesting story element. 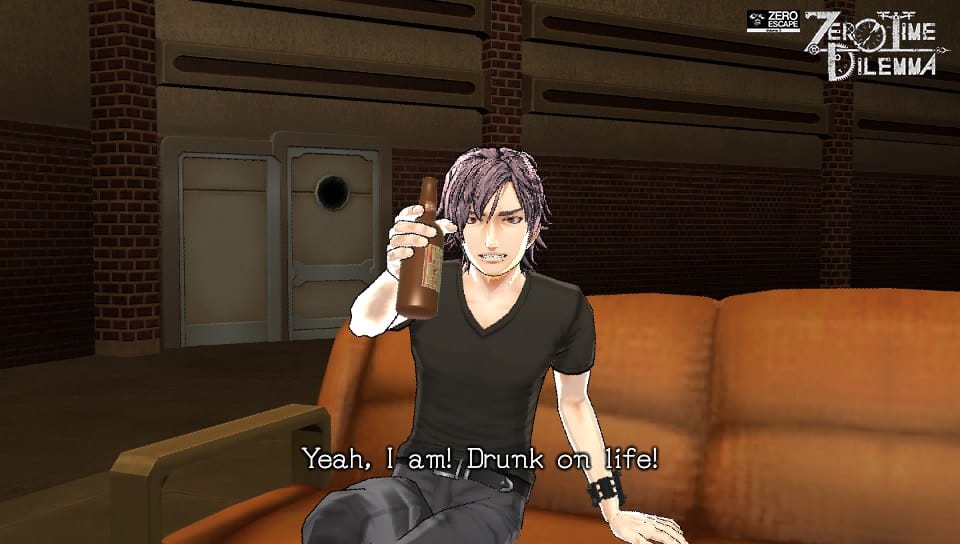 This results in a non-linear storytelling aspect  told in several “fragments” which are selectable from the team screen. This makes it super accessible to newcomers of the series, as you are not locked into a path like the previous games. There are several chapters for each team, many of them available from your first branching decisions, which allows the player to have a lot of freedom when tackling the game. Stuck on that hard C team puzzle? Save, back out, and head over to a Q team part of the storyline.

Of course, one of the things that makes Zero Escape so amazing is the characters. Character development keeps the returning characters interesting and even more loveable than before. I haven’t seen Junpei for years, and I was so happy to see him and Akane interacting and talking once again, and how he’s changed. You don’t often see a protagonist like character break the mold of the typical “nice-guy” protagonist, but Junpei changed both realistically and from what happened in the year after the events of the first game. The same goes for all of the returning characters, which fit into the story flawlessly, each having their time to shine through dialogue and side stories. New faces also keep things really fresh and are super interesting, like the seemingly emotionless and mysterious Mira and the love-to-hate Eric who is hopelessly in love with her. Diana, as the D team leader, is also very strong character. The cast of this game is absolutely spectacular, which makes the life or death theme even more painful. Your favorite character will die at one point, especially if you take on every ending/choice.

Speaking of endings, each fragment represents part of an ending path for a particular team and even has endings of its own. Most of these endings will shock, surprise, or make you scream at your Vita, 3DS, or computer. You even can get an ending really early on (it’s kind of hilarious). I couldn’t believe the amount of branching endings and paths there were, especially with the moral decision parts. There were some things I chose and didn’t expect the outcome at all.  There are many theories that may roll around in your head while playing, one of the questions being why are there multiple fragments, and more importantly, WHY are people remembering death scenes, gory demises, or minute details in other fragments? Not much can be said without going into spoiler territory, but it’s definitely one amazing conclusion.

Although Zero Time Dilemma can be considered a visual novel, it features gameplay that can be divided into two categories: puzzles and decisions/story. Each fragment begins with a team awakening in a room that must crack the puzzle and “SEEK A WAY OUT!” 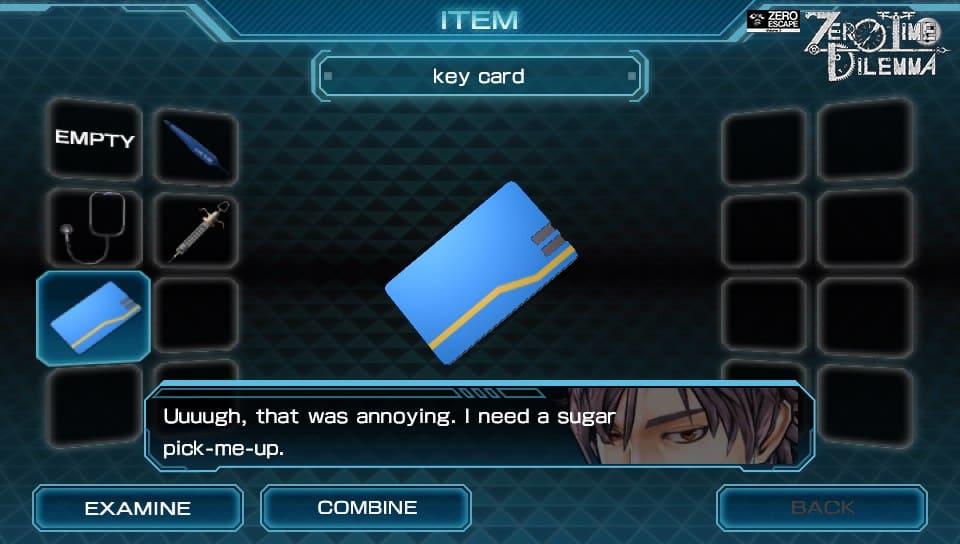 Escape-the-room minigames are one of the most iconic parts of the Zero Escape series. They involve the player navigating the room to find/combine objects and solve various puzzles with the ultimate goal of uh—escaping.  Puzzles in these rooms are mentally challenging. In fact, I made several pages of notes on paper in order to solve the ones with multiple parts.  Puzzles can range from simple logical associations (i.e. what number matches X number in the alphabet?) to putting shapes together and even some math in-between. If you are planning on law school, many similar games can be found in LSAT textbooks. So if you need another (much more fun) way to study, definitely play this game.

If you love puzzles, your favorite part of ZTD will probably be the escape games. However, even though the game is super accessible to newcomers, if you don’t puzzles, you may get a bit frustrated.
Some fragments, I breezed through, others I struggled a bit. On one hand, I absolutely loved the challenge and felt so gratified after the YOU FOUND IT! Screen flashed in my face. However, there were times I was so frustrated and got stuck, making me put down the game and pick it back up when I cooled off a bit. However, this is the normal experience I’ve had with every Zero Escape game. There is not impossible puzzle, even if you struggle with this part of the game. It just takes time.

My one complaint is that there was no difficulty level option like in Virtue’s Last Reward, as well as no way to get hints other than through character dialogue. Some hardcore fans may disagree, but for those who don’t enjoy puzzles, I really think there should be a more robust hint system in the games because it may cause someone to be frustrated/stuck and miss out on the amazing storyline. However, maybe it should come at a price. Maybe if you get a hint for one puzzle, you can’t for the next and vice versa. I’m somewhat on the fence about this still, but I hope for any future games there would be a slight feature like this. 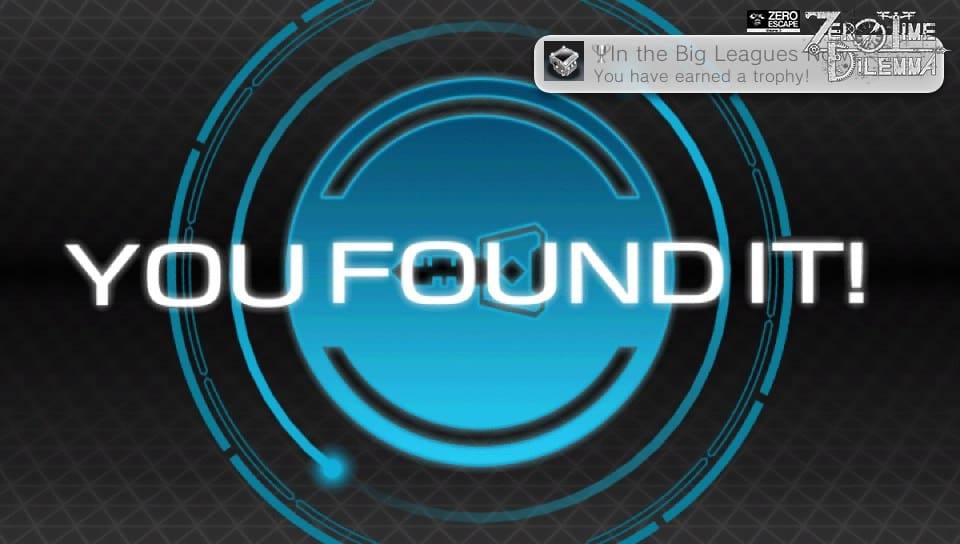 The game really is its best ‘s it’s decision time segements. I absolutely love games that force you into moral choices. The moral choices in Zero Time Dilemma are seriously the most impactful and emotionally painful decisions I have ever had to make in gaming.

How does the decision time feature work? Players must choose what to do when prompted with a decision , usually out of two to three choices, sometimes under a time limit in order to continue on or stay alive. Many times, this can mean death. Violent death. You really have to think what exactly can you do in that situation.

Do you choose to play the game to get your favorite squad to escape? Or keep sacrificing yourself to keep everyone alive to the bitter end even though you know the true nature of the other participants from another ending? Not much can be said without spoiling, but you will be tested in ways that gaming may have never tested you before. 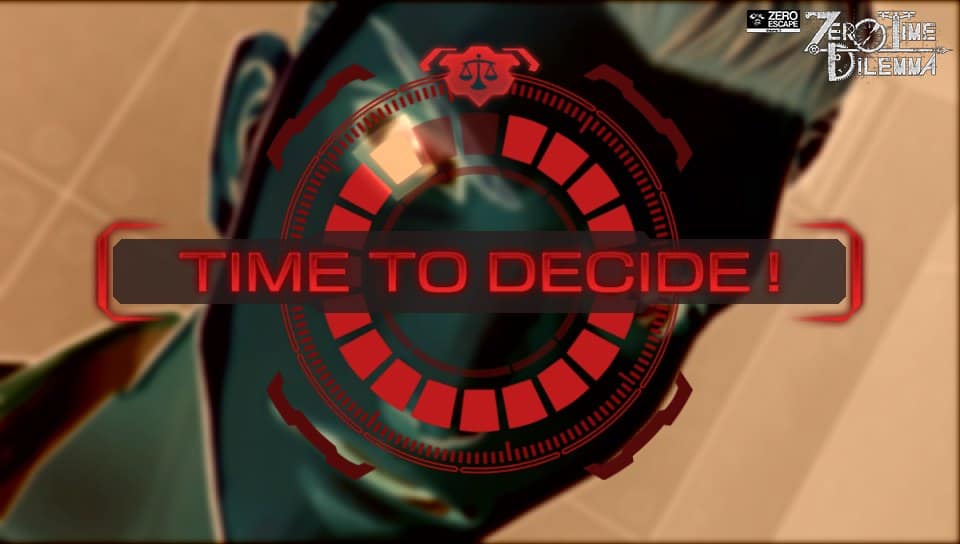 What I absolutely love is that you can go back to see your choice, and many choices are random. So maybe you decide to take the chance of sacrificing someone. In one instance, they may be alive, another they may die.  Maybe you decide to pick a box with a slight chance in getting what you need, but the chance is 10% and is never the same every time . Take notes all you want, but many choices are completely random and will surprise you.  I can not even detail how insane these choices are. The writers went all out on this epic conclusion.

Zero Time Dilemma is the best game in the Zero Escape series, featuring the most intense story,  cutscenes, decisions, and fun (and sometimes frustrating) mind bending puzzles which makes this game so amazing and definitely deserving of a spot in your library.

Other notes about the game:

Previous article10 Best E3 2016 Games
Next articleOrange is the New Black Season 4: What It Gets Right & Oh So Wrong
Emily Autenhttps://www.instagram.com/emcatcosplay/
Em is a writer and graduate student in Communications with a love for anime, video games, DDR, and the Persona/SMT series. She's also a cosplayer and enjoys hosting events and panels at conventions in her free time.