For all intents and purposes, Zombie Army 4 accomplishes what it sets out to do: be a very solid co-op zombie game. In fact, the game is at its best when you’ve teamed up with a friend or two and you’re trying to mindlessly slay the undead while you’re chatting about your day. That’s not to say that the game is boring and forgetting; it isn’t—but that’s typically how zombie games tend to play out when you’re playing with some friends. There aren’t a ton of tactics involved, except for finding the coolest way you can kill a zombie.

Anyway, what I think is noteworthy about Zombie Army 4 is that the zombies are neither too slow nor too fast; there is a great balance. For the most part, the undead is coming at you at a steady pace, with a few exceptions that are running at you with explosives strapped to their backs. It’s also worth noting that there are many different zombie types in the game, so you don’t always feel like you’re just killing more of the same; there’s a bit of variation thrown in, with things like zombies carrying guns or even flamethrowers. On top of that, all of the zombies you’ll encounter actually feel like they’re a threat to you. It doesn’t matter if you’re defending a certain point or you’re moving around in a new area, the constant threat is always there—and that’s a key element in zombie games. You can’t just stand still and shoot, as constant movement is required for survival. 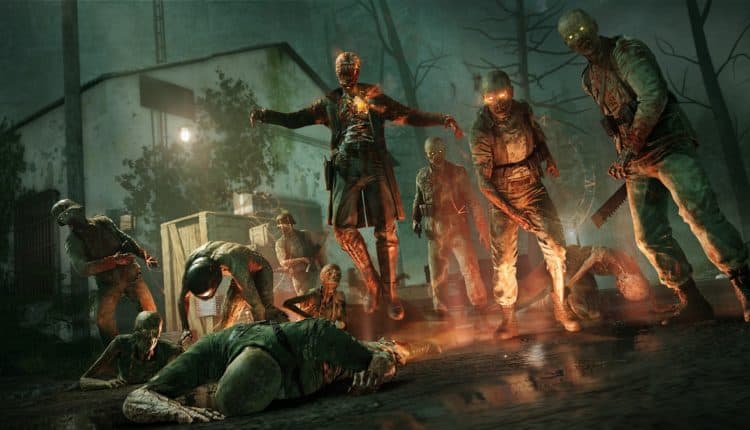 There are also some cool kills to be had in Zombie Army 4, and finding fun ways to demolish the formerly dead is half of the fun. Setting traps and using things in your environment are the obvious things you should expect, but some of the melee mechanics also add to the fun, with things like curb stomps, tackling zombies then stabbing them in the back of the head, and more. Sniping zombies is also as entertaining as ever, thanks to the return of the slow-motion kill-cam (the same one in Sniper Elite).

Zombie Army 4 is also much campier than even the Left 4 Dead games, even containing some elements like you’d expect to find in a SyFy Channel movie. For example, you’ll find a zombie shark the size of JAWS as well as a tank made of undead bodies. Neat. These campy elements add to the bat shit crazy campaign that makes it well worth the playthrough. And when you pair these out-there elements with the campaign’s varied environmental design and your upgradeable weapons, you’ve got yourself a game worth playing!

If you’re a fan of leveling up your character, assigning perks, and upgrading weapons, Zombie Army 4 does a serviceable job of each. While not fully fleshed out, it does offer players the basics they should come to expect with a game of this nature. You’ll earn new perks and unlock new upgrades throughout the campaign, and although it doesn’t go down the rabbit hole as much as I might’ve liked, what’s there is good enough to get the job done. 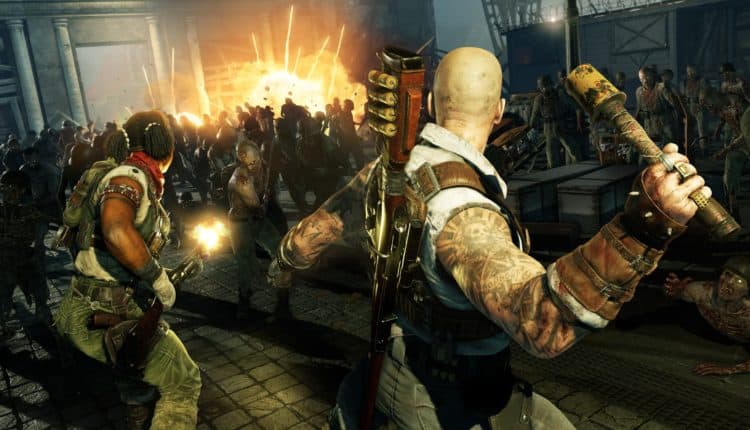 As far as the amount of content is concerned, you’re getting an 8-10 hour campaign containing 32 missions with three different difficulties and more to accomplish even after you’ve completed your first run. Then, of course, is the rinse and repeat style horde mode that doesn’t actually offer much along the lines of replay value. On top of that, you’re also getting online co-op to tackle with your friends, allowing you to team up to take on massive hordes of zombies.

In fact, where Zombie Army 4: Dead War disappoints is with its lackluster horde mode, which feels as though it doesn’t give you enough of a reason to actually play it. It’s as if Rebellion spent all of their banked creativity on the crazy campaign and forgot to save any for the horde mode, which in its current state, plays like just more of the same (or any other zombie horde mode you’ve ever played, really). I would’ve loved to have seen some unique ideas thrown in the mix that would give me a reason to play the mode more than a couple of times, but it just feels fruitless.

[bs-quote quote=”Have we been here before? Yes, dozens of times. Do we care? No, absolutely fucking not.” style=”default” align=”center” color=”#1eb1e6″][/bs-quote]

Despite the fact that Zombie Army 4: Dead War treads familiar ground, it does so while also introducing small nuances like elemental weapons, fun melee kills, and enemies more dangerous than just your standard zombie. Honestly, your enjoyment of Dead War will all depend on how enthusiastic you are about slaying never-ending waves of zombies to begin with. If you’re looking to scratch that itch, Zombie Army 4 is a hell of a game you’ll probably love. But if you haven’t found any fun in killing zombies in video games in the past few years, you can rest assured that skipping Dead War really isn’t going to affect you.

Want more zombies to kill this year? Check out our mega list of all of the upcoming zombie games this year.