Annihilation is the kind of movie that gets under your skin from the very beginning. There’s a sense of unease that hangs over every frame and every character like a foreboding storm cloud you can see in the distance. 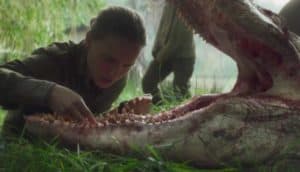 However, like any rainstorm, there is beauty hidden away that can make you stop and stare in awe.This is Annihilation. A gorgeous and terrifying science fiction film that aims to offer both an entertaining and thought-provoking experience. Despite a few minor story and character issues, Annihilation is one of the best science fiction films in years.

The plot revolves around biologist Lena (Natalie Portman) whose husband, Kane, (Oscar Isaac) returns from a black ops mission a year after he mysteriously disappeared. However, there is something clearly wrong with Kane as he falls ill, causing the duo to get snatched up by the government.

It’s here that Lena learns about a massive, time-bending energy – dubbed The Shimmer – that is slowly consuming the countryside and threatens to engulf the country if left unchecked. Outside of Lena’s husband, no one has ever survived venturing into this mysterious location. Despite this, Lena agrees to join a venture into The Shimmer with a group of all female scientists in the hopes of reaching the center and figuring out how to stop this all-consuming force of nature.

What follows is a nearly two-hour film that bends both time and reality to produce a compelling, character-driven story. There’s always a lot of plates spinning in the air and it’s remarkable that director Alex Garland manages to keep them all balanced.

This sci-fi film could have easily gone off the rails, but Garland wisely never pushes the twisted reality to a point where it becomes incoherent. While there are moments that will spark your own interpretation this is by design and a core theme of this film. Annihilation is meant to challenge audience’s perception of reality and what is ultimately possible in our own ecosystem. 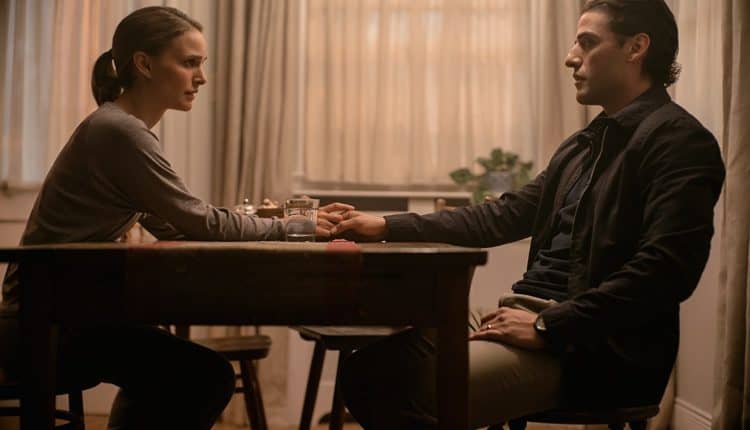 This twisted journey conjures up a plethora of memorable moments and one of the most unsettling monsters in recent memory. However, what truly makes these tense scenes horrific is Garland’s understanding that the unknown is far more terrifying. Enough of the plot is eventually explained to leave an audience member satisfied walking out, but he still leaves some questions lingering in the back of your head. It’s masterful in its execution, backed by some truly great visuals and overwhelming score. The only aspect of the actual Shimmer that fails to deliver is its execution of time jumps. There are flashbacks that play throughout the story and some of them simply break the overwhelming sense of isolation that Annihilation crafts.

Much of this is thanks to the rock solid performances from the entire group of women, all of which offer some fascinating, fleshed out characters. Once the third act kicks in you have a strong understanding of who these people are and what would drive them to take such a risk.

Portman is the stand out performance as Lena is a rich tapestry of tragedy, determination, and insecurity that all comes crashing together in the final moments. She has wonderful chemistry with the rest of the cast, especially the team leader Dr. Ventress (Jennifer Jason Leigh). The rest of the supporting cast do a great job with a special nod going to Tessa Thompson’s quietly powerful physicist, Josie Radek

Where Annihilation stumbles is in Oscar Issac who just never seems to fit in the film. The problem is it’s hard to discuss the underlying problems with his character without trending into major spoiler territory. He makes up a huge part of key moments in Annihilation, but he never feels believable in his role.

Most of his scenes are in flashbacks, but Issac sadly lacks any chemistry with Portman to showcase a convincing relationship. It’s a shame since this does make up a large portion of Lena’s motivations. While it doesn’t ruin the film, Garland appears to treat Issac’s character like a ball and chain that the film has to drag around. 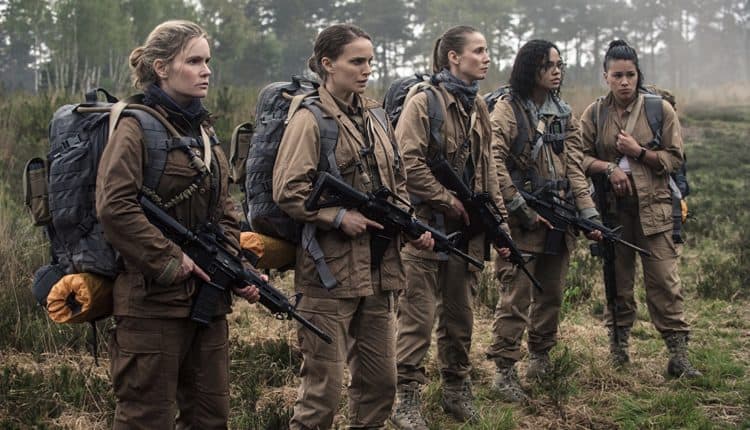 The overall ending will certainly draw some mixed reactions from audience members as Garland doesn’t outwardly explain much of what’s happening. This isn’t that big of an issue, but some more emotionally charged aspects get lost in a haze of CGI and mind-bending effects. It’s all very beautiful, but it can be visually overwhelming as the movie has a bad habit of bombarding you with a kaleidoscope of colors. That being said, it’s not a really big issue and the majority of the visual design is handled effectively.

Annihilation is an awe-inspiring science fiction film that could certainly become a milestone within the genre. A symphony of color, sound, and surreal beauty, director Alex Garland mostly balances every aspect of this movie with ease. Thanks to a terrific leading cast, the struggles and dangers of this world are wholly convincing. Even though Oscar Issac’s military man falls flat in most scenes, it’s hardly enough to detract from this movie. While Annihilation is set to release on Netflix, you’d be doing yourself a disservice by not witnessing it on the big screen.