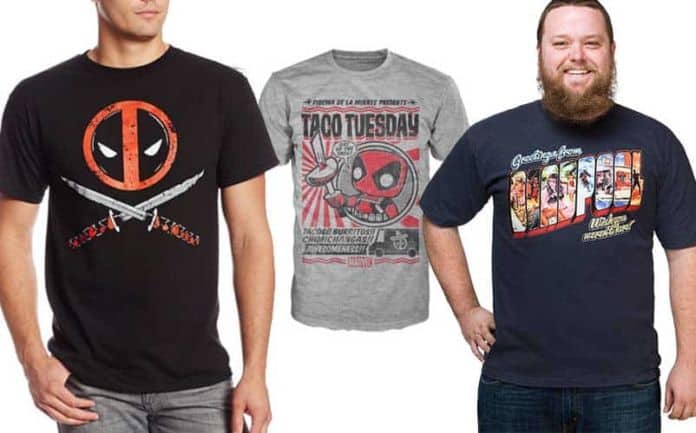 With a planned release this week, the Deadpool movie has everyone excited, and the early reviews are looking promising. Starring Ryan Reynolds as the main character, Deadpool is a cancer sufferer who undergoes a cure which promises to give him super powers, which it does. The super powers he possesses allows him to heal at a faster rate than he would as a human.

There’s already a ton of great Deadpool merchandise available, and of course, with the release of the Deadpool movie (and a Deadpool 2 already in the works), there is much more on the way. With plenty of Deadpool t-shirts on Amazon, at ThinkGeek, Entertainment Earth, and more, you shouldn’t have any trouble finding some great shirts. So if you’re in the market for some badass new Merc with a Mouth merch, check out our list of the top 10 best Deadpool shirts: 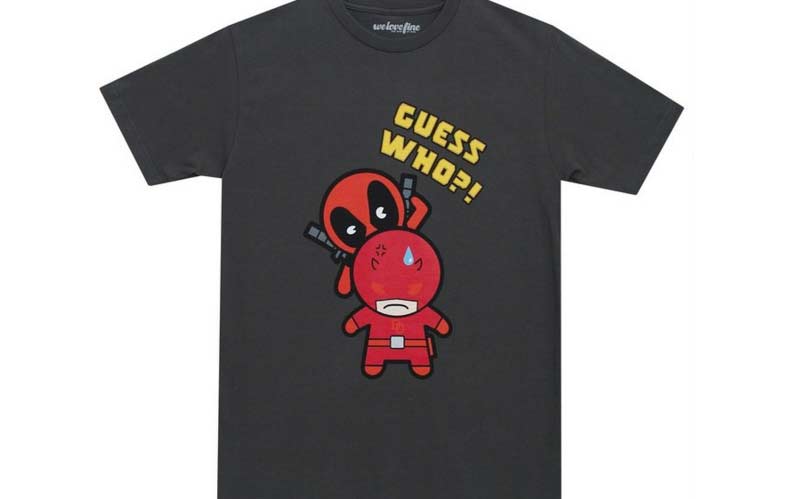 With a 5 star rating, the Deadpool Kawaii Guess Who T-Shirt is a hit with Deadpool fans. The shirt shows Deadpool antagonizing Daredevil by saying “Guess Who?!” to a blind man. It’s officially licensed by Marvel, and it’s actually being sold right from the Marvel shop on Amazon. 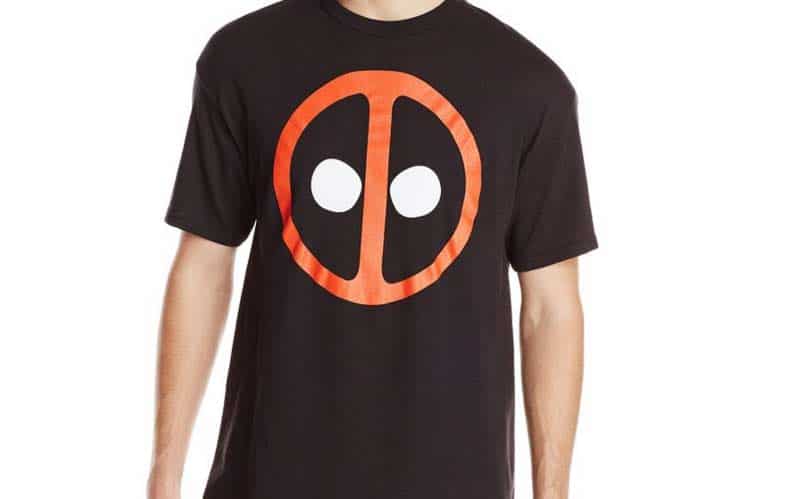 Another Deadpool T-shirt we see worn around all the time is the Deadpool Icon T-shirt, also officially licensed by Marvel. It features a design based on Deadpool’s face on the front. This is quite a simple design, but it also manages to make an impact at the same time. It is good quality, with sizes ranging from small to 3X tall, so anyone can wear this fun shirt. 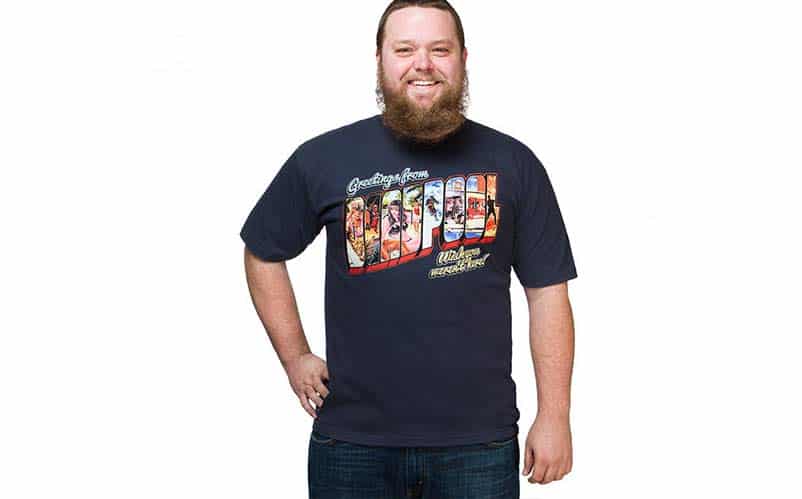 This navy blue “Greetings from Deadpool” shirt features the character himself in many scenarios, including on the beach, diving and skiing down a mountain. These scenes are featured within each of the letters of Deadpool, alongside a warming message that says, “wish you were here.” This is an exclusive for Think Geek and is proving to be a popular choice among superhero fans!

Buy this Deadpool shirt at ThinkGeek. 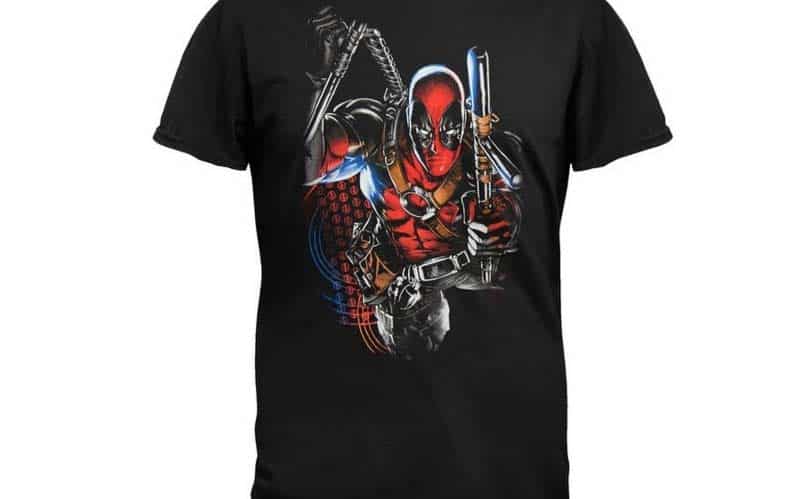 If you’re looking for just a cool graphic of Deadpool that isn’t over-the-top, check out the Deadpool Attack T-shirt. It’s got a badass-looking Deadpool on the front with two batons, one in each hand. You can also see one of his katanas behind him, letting us all know that he’s ready to rumble.

Buy This Deadpool Shirt on Amazon. 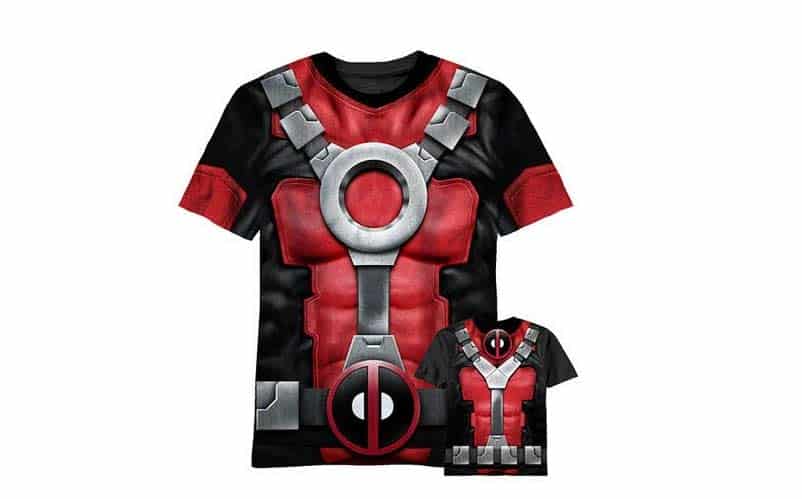 Featuring the torso of the superhero himself, the Deadpool Sublimated Costume T-Shirt is a fantastic bit of Deadpool merch from the upcoming film and an absolute must for fans. The t-shirt is black with red and silver and is available in sizes from small to XXL. A visually exciting choice in Deadpool shirts, you can expect to get a lot of second glances when you wear this one on the high street. It’s the lazy man’s Deadpool cosplay. 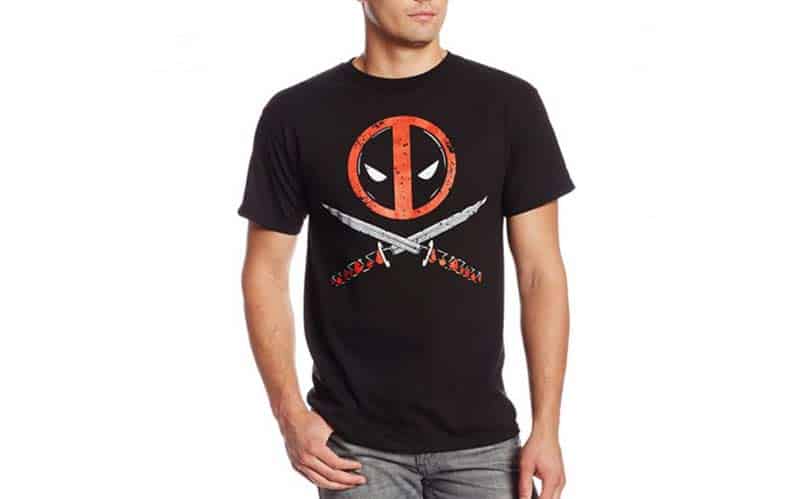 A must-have for fans of the Marvel movie, the Marvel Deadpool Crossbones Mens Black T-Shirt features the face of the enigmatic character with crossbones underneath. It’s the perfect shirt for the Deadpool pirate lover. The t-shirt is black with red and silver. The design is prominent and it is a high quality t-shirt, without an expensive price tag.

Buy this Deadpool Shirt on Amazon. 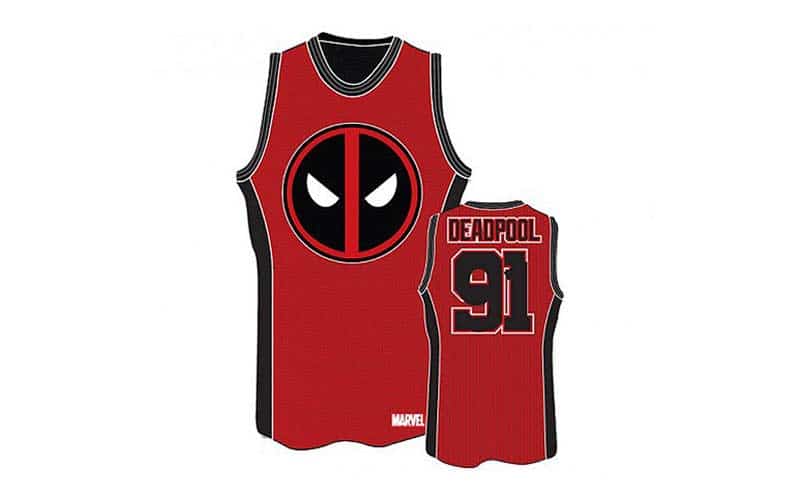 If you are feeling the heat or want to show off your guns, the Deadpool Basketball Jersey is the perfect choice. With the logo of the dynamic character himself, it’s available in sizes from small to XX large. This Deadpool shirt is a popular choice for fans of the soon-to-be hit movie, and it’s available now for pre-order via Entertainment Earth. 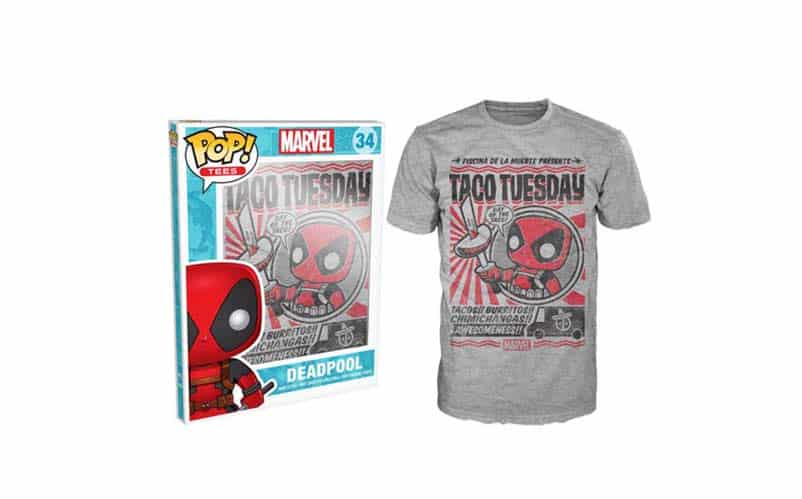 Aside from making great vinyl figures, FunKo also makes great Pop t-shirts. Their Deadpool Taco Tuesday Pop shirt is no exception, as it features a cutesy Deadpool supporting his love of Mexican food. 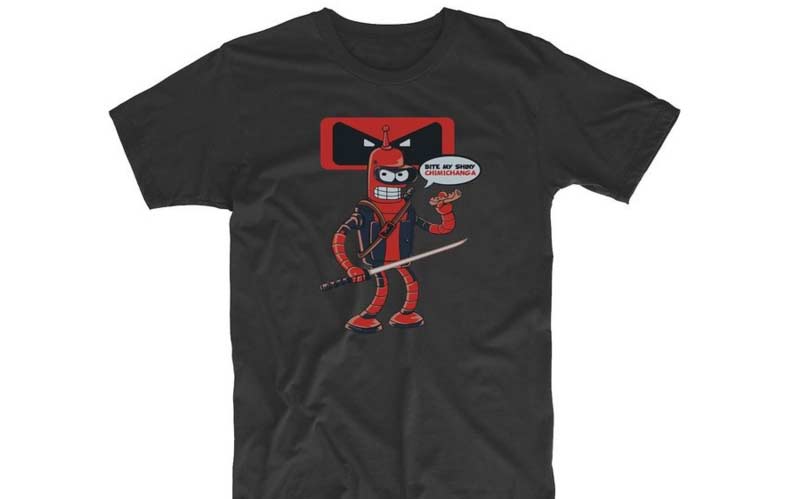 This t-shirt is a fun mash-up of Deadpool and Futurama, with the character of Deadpool being reincarnated as Bender. This is a high quality branded t-shirt, which is available in sizes from x-small to 3XL. It has been professionally printed, so you can expect nothing but the best from this t-shirt. It’s available in black or red. 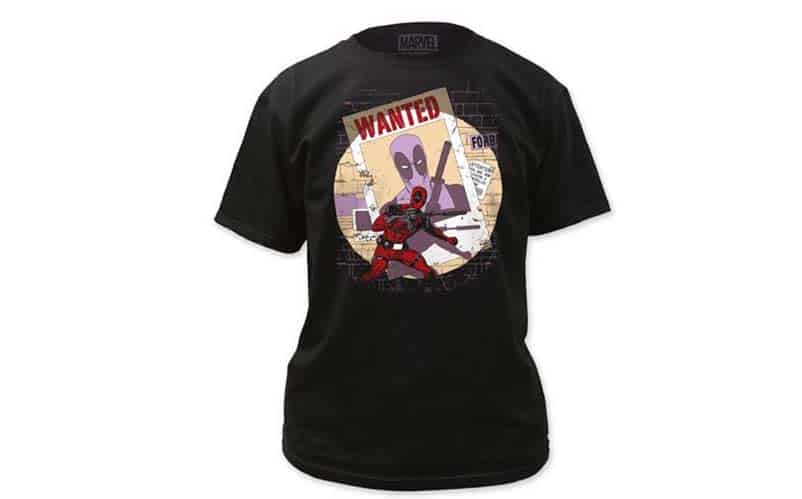 Deadpool’s comedic style is hard to replicate on a shirt, admittedly, but once in awhile we’ll come across a Deadpool tee that just oozes the merc’s style, like this Deadpool Wanted Black shirt. This tee shows a wanted poster of the Merc with a Mouth, with the character sneaking in front of the poster with an assault rifle. It is available in a range of sizes from small to 2XL and is a treat that any fan of the movie will enjoy. It’s available now for pre-order via Entertainment Earth.

Buy it at Entertainment Earth.