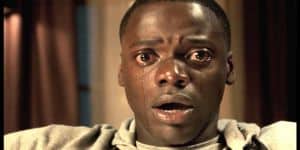 Get Out at first glance might appear to be another cheesy early year horror film that is destined to fail, yet despite all odds this movie may just be one of the most memorable pieces of genre work in years. Directed and written by Jordan Peele, Get Out marks Peele’s first foray into horror as he aims to tell a tense, terrifying tale that is not only full of cultural commentary but quite a few laughs too. While this would normally be concerning, Peele manages to keep all of his plates spinning at the same time through the modest hour and forty minute runtime. Even with the small issues it has, Get Out stands above the rest as 2017’s best horror movie so far.

The film follows young couple Chris (Daniel Kaluuya) and Rose (Allison Williams) who embark on a trip to spend the weekend with her parents at their countryside estate. Chris is concerned that they will not embrace him as openly since he’s black and while the family at first seems to have some oddball remarks everything appears normal. Though it’s not long until Chris begins to notice that all of the other black community members are either servants or treated like boy toys among the rich and fancy white folk that have gathered for an annual party. Eventually, this leads him on a trip to discover if there really is a big secret hiding behind the walls of this household or if it’s just his paranoia getting the best of him.

Where Get Out succeeds is that Peele doesn’t waste time tap dancing around this idea and is rather forthcoming with how uncomfortable the viewer needs to feel in Chris’ situation. It’s clear that Rose’s father Dean (Bradley Whitford) and her mother Missy (Catherine Keener) have some uncomfortable mannerisms when interacting with him. The latter more so as she is a psychologist who specializes in hypnosis, which is a service she offers Chris very early on the movie and is the main narrative device used to deliver a lot of the tenser scenes. Much of this rides on Keener’s performance as many of the scenes involve her sitting down, running a spoon along her cup of tea, and hitting the right emotional pressure point.

The hypnosis treatment serves as a wonderful way to pull exposition out of Chris and help deepen the main character’s story without it feeling forced into an awkward dialogue exchange. Peele wisely only uses this concept at a bare minimum, which allows for it to be even more effective during its screentime. An idea like hypnosis could have easily pushed this plot into a sillier territory, but the story never waivers into the supernatural and even with a bit of an odd reveal at the end mostly stays on track. 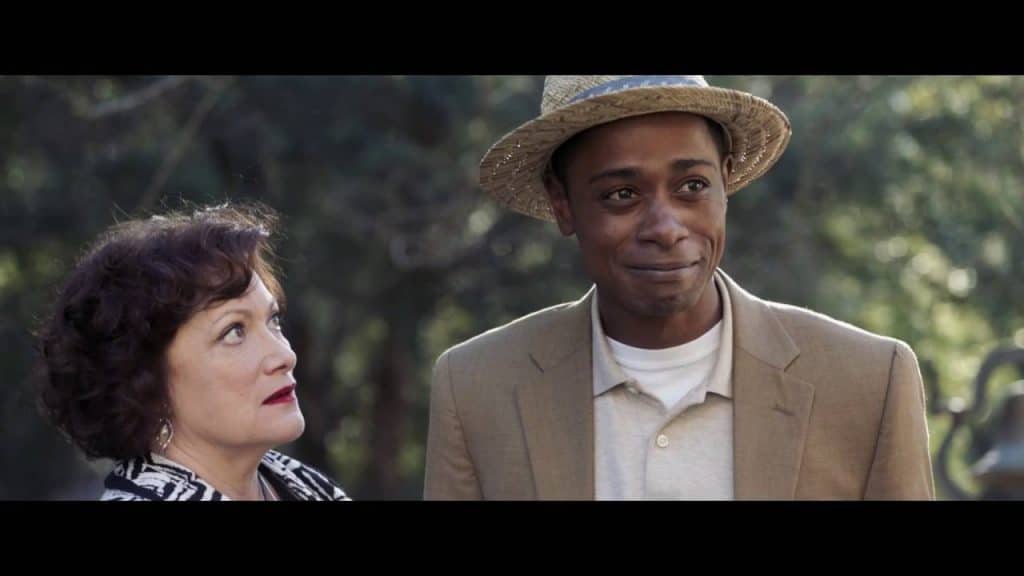 A lot of this is thanks to wonderful performances from the cast, who bring their A game and hit every mark their respective characters need. Rose’s family seems charming at first, but are clearly unsettling at times while the two servants that work for them, Georgina (Betty Gabriel) and Walter (Marcus Henderson)  are exceptionally creepy, and the relationship between Rose and Chris feels real. Watching the various actors interact is highly entertaining as the entire cast has a natural chemistry with one another. While Rose does get the short end of the stick when it comes to character development, Williams does a great job of portraying the character and her many emotional layers.

Yet, the special shoutout for Get Out actually goes to Chris’ best friend who is portrayed by Lil Rey Howard. While Howard provides much of the comic relief, he also acts as a way for some of the history and information to fill in various plotholes that were rather glaring. His character is a riot and absolutely dominates the screen anytime he is on, bringing big laughs to help balance out the more intense moment. The only real issue is this comedic angle is used a bit too much in Get Out as it undermines some of the horror aspects later on in the third act. However, this is a minor complaint as both Kaluuya and Howard are good enough in their roles that switching between the two of them is not nearly as jolting as it should be.

However, we do need to address the elephant in the room when it comes to Get Out‘s message and cultural commentary because it can be easy to dismiss this movie from the trailer alone. Yes, Get Out discusses racism between blacks and whites, yet it’s handled with more of a scalpel than a blunt instrument. While the general idea is forward enough, Peele digs a little deeper by questioning if it’s just Chris’ paranoia and preconceived notions of what to expect. It’s an interesting angle, that allows Get Out to offer more than just “racism exists” and explains how its viewed from both sides of the fence. This not only helps deliver a unique message for a horror movie, but ends up working as a wonderful explanation for the big reveals near the end of the movie.

Get Out is a horror movie that shouldn’t be missed as Peele shows that you can still produce interesting, original ideas in the modern age. The entire cast performs their roles wonderfully, making each character feel lived in, relatable, and yet incredibly alien at the same time. Both the editing and sound design are top notch, which compliments the cinematography nicely. Scares and laughs are plentiful, however, the latter does have a bit of a bad habit in overtaking the former mainly because Howard is absolutely hilarious. There is a lot more to say with regards to Get Out‘s plot, but that would spoil some of the movie’s best moments. Seriously, just go out and see this movie as it more than worth your time. Who knew that Jordan Peele may be the next big name in horror.