The open letter, which you can read via the image below, starts strongly with the crew’s declaration in the first sentence that they “fully support James Gunn.” The 10 day wait between Disney’s firing of Gunn and today’s statement was intentional by the team in order to “think, pray, listen and discuss.”

The Guardians of the Galaxy cast state that it’s not their intention to “defend [Gunn’s] jokes of many years ago but rather to share our experience having spent many years together on set making Guardians of the Galaxy 1and 2.” They continue, stating that they believe Gunn’s apology for his distasteful remarks “is from the heart, a heart we all know, trust and love.”

Perhaps most poignantly, the letter reads “In casting each of us to help him tell the story of misfits who find redemption, he changed our lives forever. We believe the theme of redemption has never been more relevant than now.”

On July 20th, Disney quickly and aggressively publicly fired Gunn following offensive tweets from years ago resurfacing. Alan Horn, Walt Disney Studios chairman, released a statement that day stating “The offensive attitudes and statements discovered on James’ Twitter feed are indefensible and inconsistent with our studio’s values, and we have severed our business relationship with him.”

Gunn took to Twitter to later that day to apologize and explain himself:

“Many people who have followed my career know when I started, I viewed myself as a provocateur, making movies and telling jokes that were outrageous and taboo. As I have discussed publicly many times, as I’ve developed as a person, so has my work and my humor. It’s not to say I’m better, but I am very, very different than I was a few years ago; today I try to root my work in love and connection and less in anger.

My days saying something just because it’s shocking and trying to get a reaction are over. For the record, when I made these shocking jokes, I wasn’t living them out. I know this is a weird statement to make, and seems obvious, but, still, here I am, saying it.

Anyway, that’s the completely honest truth: I used to make a lot of offensive jokes. I don’t anymore. I don’t blame my past self for this, but I like myself more and feel like a more full human being and creator today. Love you to you all.”

A petition was started on Change.org seeking for Marvel to rehire gun. Since being started last week, over 339,000 fans have signed their support. With pressure mounting, we’ll have to wait and see whether Disney reconsiders their stance and bring Gunn back aboard for Guardians of the Galaxy 3. 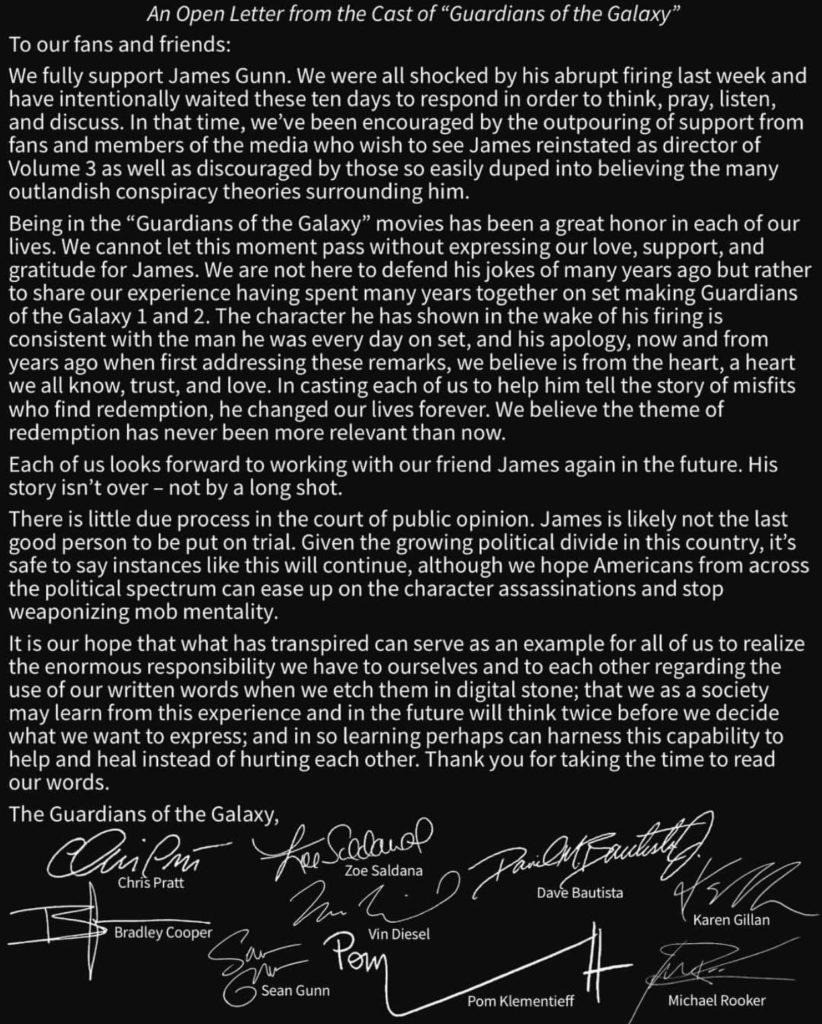