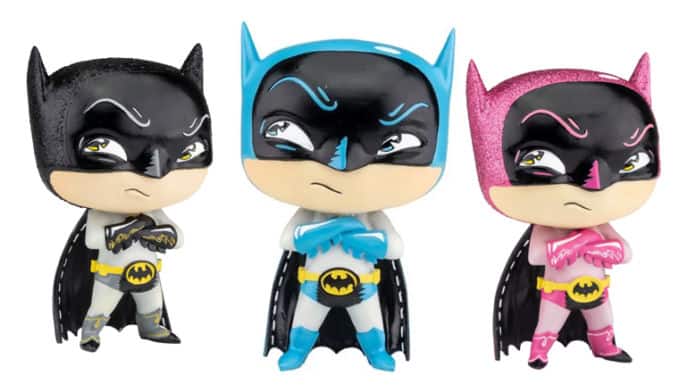 Buy it from Entertainment Earth

Boy, Batman sure is looking sassy!

Available in a trio of colors, including a too-cool pink that The Dark Knight really should consider as his next costume, this The World of Miss Mindy interpretation of Batman is a delightful addition to any collection.

Sporting his iconic cape and cowl, the Caped Crusader is having none of your nonsense, as evidenced by his furrowed brow, crooked mouth, and side-eye. The signature design is perfect as part of the Miss Mindy Batman Statue Collection, a folk artist known for her kooky and original depictions of popular characters, primarily in Disney’s universe. For these custom vinyl Batman statues, she stepped outside the bright and sunny realm of Disney Animation to find herself in the gloomy alleys of Gotham City.

Though the three statues have the same expression, each one depicts Batman wearing a different color. A glittering pink Batman may not be menacing, but he sure is stylish as the light and hot pink color combination is carried throughout his costume, right down to his boot covers and gloves.

The black statue is a bit more true-to-form, with hints of yellow in his eyes, gloves, and boots, accompanied by a light and dark grey costume to contrast the black cowl and cape. For a more classic look, you’ll want the blue and black variant, which sports the iconic light blue coloring of the 60s iteration.

Each statue, handcrafted and brought to life by the World of Miss Mindy, stands 4” tall and features a unique design on the back of the cape. Collect all three for a trio of adorable Batman statues that aren’t too cute to fend off Gotham’s worst villains.