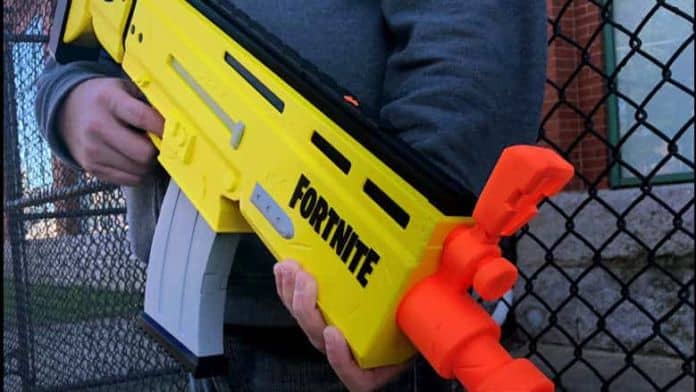 We’ve known for a while that Hasbro and Epic Games were teaming up for toys and games. They previously announced that Fortnite Nerf blasters would begin arriving this upcoming spring. But the toy company and the battle royale developers have finally offered details on the first Nerf gun they’ll be rolling out this June – the Nerf Fortnite AR-L blaster.

Here is Hasbro’s description of their upcoming Nerf Fortnite AR-L:

“When it comes to creating epic Fortnite battles in real life, it’s Nerf or nothin’! Inspired by the iconic weapon used in the popular Fortnite video game, the Nerf Fortnite AR-L blaster boasts rapid-fire motorized blasting and flip-up sights that allow players to focus their aim as they eliminate opponents and attempt to survive the Storm. The Nerf Fortnite AR-L blaster features a 10-dart clip and comes with 20 Elite darts, so Fortnite fans can play with power and precision no matter where the battle is building.”

The toy gun will list for $49.99 and will require 4 AA batteries that are not included.

The Hasbro and Fortnite pairing isn’t just bringing us the Nerf Fortnite AR-L and the yet to be announced other blasters. The duo has just recently released a Fortnite Monopoly game to capitalize on the game’s success as well.

If you’re a big fan of Fortnite, it’s certainly a good time to get your hands on some cool toys based upon the game. These are surely just the first of many. We’ll have to wait and see what other Nerf toys Hasbro and Epic come up with further down the line.