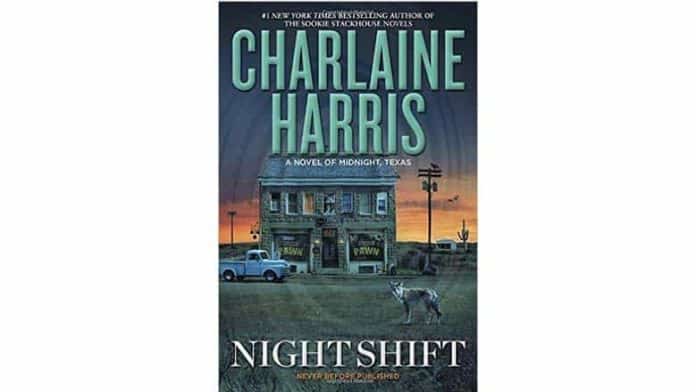 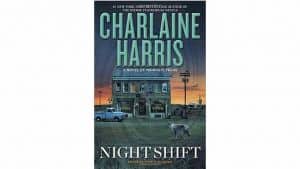 Let me start out by saying that this is the first Charlaine Harris book I’ve ever read; I’ve always meant to, as I know that her highly popular Sookie Stackhouse series was the inspiration for the TV series True Blood (not that I’m a fan), so I had to see what all the hype was about. When I saw that Night Shift was coming out, I decided to give it a try; based on the genre, I didn’t have very lofty expectations, yet this book still managed to disappoint me. It’s trashy in the way that Twilight is trashy, and it has the added downside of not even being well-written trash. I eyerolled pretty hard through the whole thing, and a few times even cringed; read on for a more detailed review, but not if you want to avoid spoilers.

First, let’s talk about the characters. Each one is singularly one-dimensional, with their one personality trait emphasized to the point of caricature. Fiji’s sister, for example, is cartoonishly evil, first and foremost because she has sex with multiple men (slut-shaming abounds in this book). Her appearance adds nothing to the plot whatsoever and is completely pointless except to reinforce that of course promiscuous girls must also have universally loathsome characteristics. Fiji, by comparison, is a beaming example of virtue; she, of course is a virgin. Although this may be due to the fact that men aren’t exactly lining up to sleep with her because she’s fat, and therefore completely undesirable. That is, until sleeping with her becomes the key to saving the world, and then a few of them reluctantly admit that they could take one for the team. Admittedly, the cast was fairly diverse, but the author mentions this several times in a very self-congratulatory way; like, “Look at me, I included blacks and gays in my book.”

That’s right; sex with a virgin witch is the key to saving the world, and (no pun intended) the climax of the entire novel. Naturally, it matters not if the male in the scenario is a virgin; any old one will do. Which brings me to the plot (or lack thereof). The author spends 3/4 of the plot on really mundane things; the few points in the book that could have been interesting were terribly anticlimactic. There is no build-up to anything; plot points are just awkwardly dropped into the middle of the text, so that I had a hard time feeling any sort of reaction at all to them. Characters just randomly pop in, spout off one or two lines of incredibly contrived dialogue, and then abruptly leave. The action was all skimmed over incredibly quickly, and the description was sparse, which just felt like really lazy writing. Even the ending with the demon trying to escape could have been so much cooler; the fact that we only see his hand before he is again sealed away felt like the author was trying to avoid having to write a decently thrilling scene.

Also, let’s not forget the fact that there is a new guy in town that knows the solution to their problem all along and just chooses to keep it to himself for no apparent reason until near the end of the book. At which point he randomly shows up to one character’s house and is like, “Hey, I’m your grandfather. And that demon under the road is your great-grandfather.”

So, Fiji does the deed for the first time in the middle of the road and her magical virgin blood seals the demon away for another 250 years (never mind that the majority of women don’t actually bleed). That is the high point of the entire book; the author adeptly skirted away from potentially cool vampire fights, shootouts, and a battle with a demon. This felt like paranormal fantasy lite, in no small part because there are vampires that can siphon energy instead of blood. There are a couple tenuous, half-developed plot threads aside from the main one, which are never really brought to fruition. One of which leads a stretch hummer full of armed me to randomly show up in Midnight, at which point we realize that the Midnight residents are bad at lying and the police are incredibly gullible.

I feel like I’m being harsh, because I know a lot of people are fans of this author; honestly, I tried to find one redeeming quality about this book, and I failed. It does get points because I was actually able to finish it; it’s mercifully short, so, there’s that. There were a number of potentially intriguing concepts that the author could have developed further and made this book more interesting, but she failed to do so, so it really fell flat. As I haven’t read her earlier books, I can’t say if she’s one of those authors that just rests on their laurels after so many successful books; unfortunately, after reading this, I have no desire to find out.