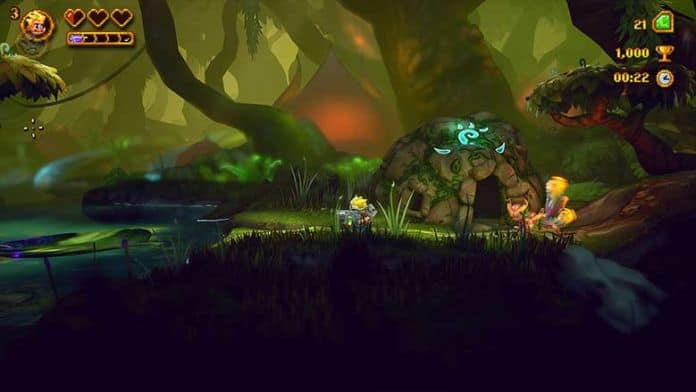 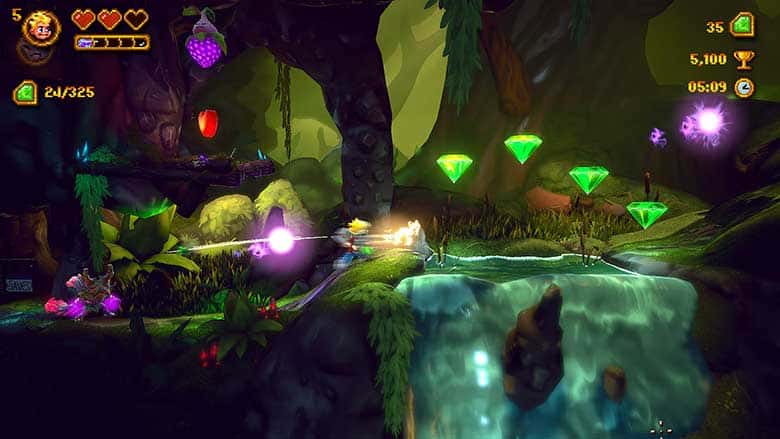 A review copy was provided by the publisher.

It’s official — the video game market is officially overloaded with nostalgic platformers a la the 90s-20s era. Celeste, Monster Boy, Owlboy, Hollow Knight, and Yooka-Laylee are just a mere handful for the most recent platformers heavily inspired by the 90s. Now, there’s another platformer to add to your backlog of games to play: Rad Rodgers.

Rad Rodgers is one of more unique 2D sidescrolling platformers I’ve personally played in the past few years. No — it doesn’t do a whole lot along the lines of originality with its gameplay (although there are some unique elements I’ll get into shortly). But what it does extremely well is personify the ’90s cool kid attitude with its protagonist, Rad.

Rad is a video game-loving young boy who finds himself sucked into his TV after a long night of gaming, where he finds himself joined by his now-sentient game console and trusty sidekick named Dusty (who, for the record, sounds a hell of a lot like Danny Devito). Both are extremely likable characters, which is how Rad Rodgers sets itself apart from most of the other recent platformers.

Dusty is mostly there to voice his support, but he’s playable during sequences in what’s called the Pixelverse, an area you’ll be required to enter frequently in order to progress in the game world.

You’ll mostly spend your time running and shooting your way through various levels of a similar nature, but you’ll do so drenched in a ’90s attitude. There are many humorous moments as you play, including hilarious one-liners from Dusty and 4th wall breaking commentary from NPCs you’ll find in huts. Admittedly, Dusty’s chatter does grow a bit stale by the end of the game, but it is easily appreciated early on.

[bs-quote quote=”TL;DR: Beautiful world but repetitive level design makes it a play if you want but don’t go out of your way or anything.” style=”default” align=”center” author_name=”Bobby Bernstein” author_job=”Nerdmuch.com Owner”][/bs-quote]

Dusty will also arm Rad with a handful of cool weapons, with our favorite being the Phoenix Cannon, which shoots out a flaming phoenix as your bullet. There’s also a grenade launcher, a machine-gun-like version of the Bolt Blaster, and more to satisfy those looking for some fun weapons to play with. These weapons are found scattered throughout each level in the form of a weapon power-up, some of which allow you to choose whether you want ammo X or ammo Y. 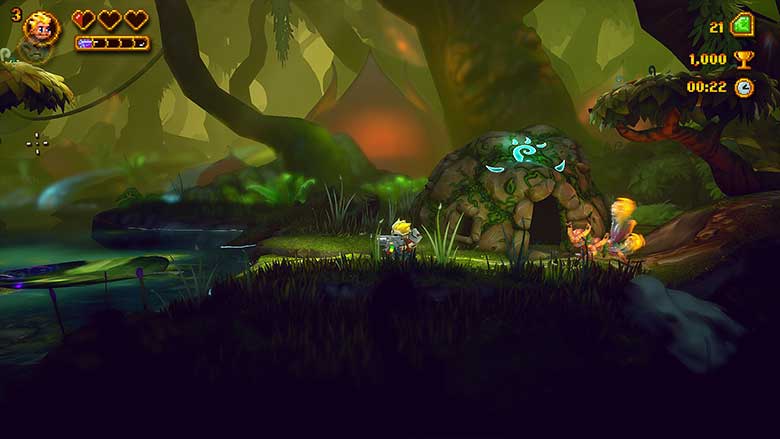 The game looks gorgeous, with highly detailed environments, beautifully drawn character models, and all of the cool glowing stuff your eyes can take. There are eight different worlds for your viewing pleasure, although the majority of those worlds all look a bit samey. Luckily, that “same” look DOES look great.

Aside from those eight worlds, there are also new Pogo Vertigo Bonus Levels that task you with escaping a flood of water rising vertically using only a pogo stick and platforms above you. They’re fun and challenging, and there are only a few of them so they never really outstay their welcome.

On top of running and gunning, there are some very light puzzle-solving elements in the game, both in the Pixelverse and in the regular game world. They’re all easy, but the add just another thin layer to the onion.

There are also two minibosses throughout the game (both easy), as well as a surprisingly easy final boss.

Soundwise, expect a lot of nostalgic, synthy arcade effects and soundscapes, only disrupted by Dusty’s foul mouth. It all fits well with the heavy ’90s vibe that the devs were shooting for.

Technically speaking, there weren’t any graphical or performance issues at all, with the game running smoothly on PC. 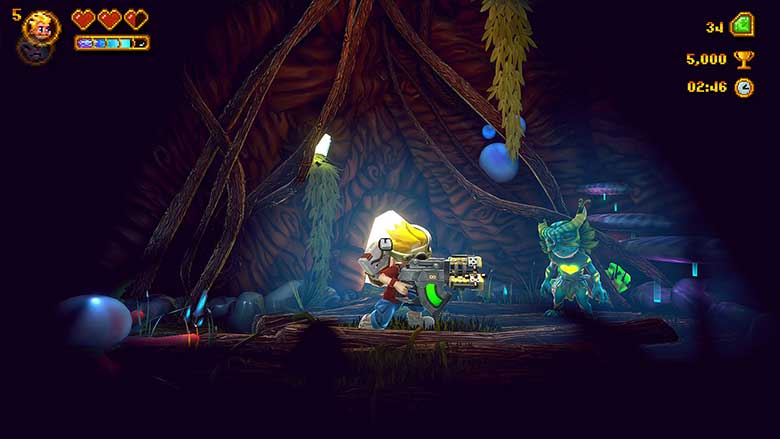 Where Rad Rodgers goes wrong is in its short length and its lack of variety. The game only takes around seven hours to complete, and for those seven hours, you’re mostly looking at the same thing, doing the same thing, and hearing the same things. The devs could’ve blown the door wide open with some of the game’s ideas, but unfortunately, most aren’t as fleshed-out as they should be.

Still, what Rad Rodgers is is a good (not great), $20 game that you’ll give a playthrough of and likely never touch again. Despite its repetitive level design, samey environments and repeated one-liners, it’s still worth the play. And actually, I’d love to see a sequel hit that maybe explores some of the ideas a bit more. For now, Rad’s adventure is worth taking, and you should give it a shot.

Previous articleWhy Violence In Video Games is Necessary
Next articleMute Review: You’ll Ask ‘Why Did I Watch This?’