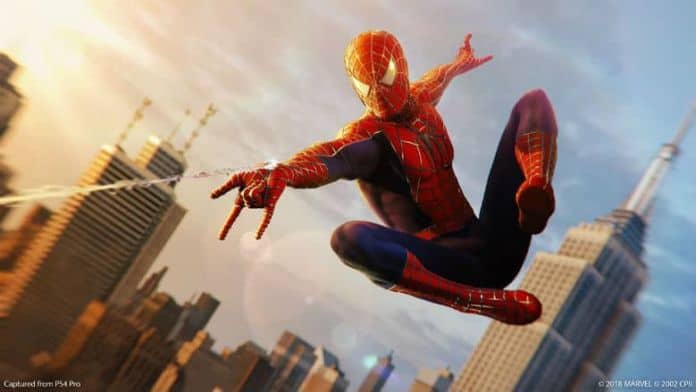 Once the final set of Spider-Man suits were revealed last week, many fans expressed disappointment to Insomniac Games that Sam Raimi’s iconic costumes from the original Spider-Man movies didn’t make the cut. It turns out that the developers were merely holding back the goods, as today they announced that the Sam Raimi Spider-Man suit is coming to the game today – free of charge.

Surprise! It’s time to party like it’s 2002. A certain suit is available now in #SpiderManPS4. Yes, *that* suit. pic.twitter.com/574WnUO7BZ

The design is a famous one. The Sam Raimi Spider-Man suit debuted within the director’s 2002 blockbuster for Sony, Spider-Man. It was later iterated on reappeared in 2004’s Spider-Man 2, as well as 2007’s Spider-Man 3. We don’t like to talk about that last one though…

The Sam Raimi Spider-Man suit obviously means a lot to folks that grew up while Raimi’s trilogy was dominating the box office. So much so, that one fan tweeted a response to the announcement that he broke down and cried while at this gym earlier this morning:

There was likely a few licensing issues that needed to be worked out in order to make the Sam Raimi Spider-Man suit a reality on PlayStation 4. Insomniac’s Community Director, James Stevenson, tweeted back in August a tease that the movie suits could be coming. But after that Insomniac went silent on the matter. Thus the blowback when fans were shown the 3 final suits within the Silver Lining DLC and Sam Raimi’s Spider-Man suit not being one of them.

It looks as though fans finally got their Christmas wish though. The Sam Raimi’s Spider-Man suit is available for download now within the game and it’s completely free. And tomorrow brings us what is likely the final DLC that we’ll see for the title in the Silver Lining content. But hey, there’s always the upcoming comic to tide us over until the inevitable Spider-Man 2 for PlayStation 4.

Previous articleI Am Still Alive Movie Adaptation to Star Ben Affleck
Next articleSpyro the Cable Guy Figure is the Perfect Complement to the Remaster
Jeff Scott
Growing up a 90's kid, Jeff found his love for gaming during Nintendo's heyday. Because of that, you could (perhaps sadly) call him a "Nintendo Fanboy" to this day.