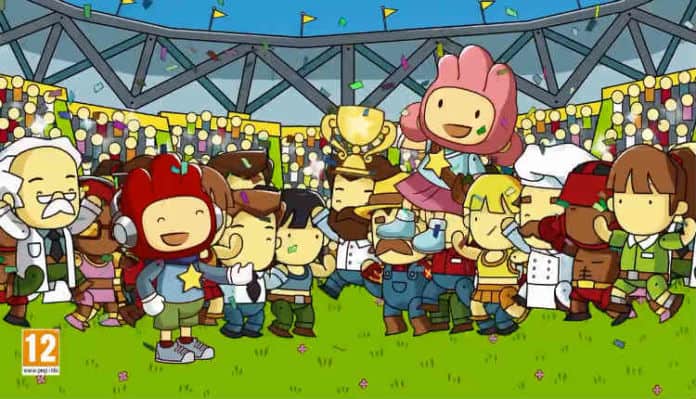 It’s been rumored for a little while now, but today Warner Bros. Interactive Entertainment made it official. Scribblenauts Showdown is hitting consoles in just a couple of months.

The Scribblenauts series is taking aim at the party game genre now. Scribblenauts Showdown has a few different takes on the formula. With the title’s main “Showdown” mode having two styles of games.

There are “Wordy” mini-games that reward players for utilizing the best object or character in the Scribblenauts dictionary. And also “Speedy” action-oriented games that require players to complete given challenges first in order to win the round.

It sounds as though Showdown revolves around a Mario Party-esque board game of sorts. As the match progresses, there will be opportunities to catch up to your opponents should you fall behind so that everyone remains in contention as you head towards the end of the match.

There is also a straight up Versus mode too. Here, two players will go head-to-head across 25 different mini-games that will be randomly selected. Solve objectives within the mode’s eight levels and try to out-think your opponent to win.

In each of the above modes, players will be able to customize their very own Scribblenauts Showdown avatar for use within matches. There is also the standard Scribblenauts Sandbox mode that gives you free reign to experiment and play around within the game’s engine.

Scribblenauts Showdown, while just announced today, is a mere weeks away. The game will launch in North America on March 6th. It’ll be available for Nintendo Switch, Xbox One and PlayStation 4.