(A Sekiro review copy was provided by the publisher).

Sekiro: Shadows Die Twice is a new action-adventure game from the creators of Bloodborne and Dark Souls that is set in late 1500s Sengoku Japan. You play as Sekiro, or “the one-armed wolf”, so named for the prosthetic arm you are given when rescued from death.

Sekiro is a Shinobi sworn to protect the heir of an ancient bloodline; so when the young lord is kidnapped by the same man that cuts of your arm, it falls on you to rescue him. It has some notable similarities to its predecessors but is also a departure in many ways. For instance, it drops the role-playing classification; although there are some light RPG elements, like skill trees and two increasable stats, the focus here is primarily the action and fast-paced combat.

I’ve had only a few days to spend with Sekiro; not nearly enough for a full review, but enough to offer my initial thoughts about the game. In the interest of transparency, let me preface this by saying that I have never played Bloodborne or Dark Souls. I would not have been the obvious choice to review this game, except that I happened to be the only one available, so I agreed (albeit somewhat apprehensively). However, I’ve been pleasantly surprised thus far. Yes, it is hard – at times it seems brutally so to me, although I’ve little basis for comparison when it comes to Souls-like games. Even if you’re not a glutton for punishment, though, Sekiro has other appeals that help soften the sting of repeated deaths. 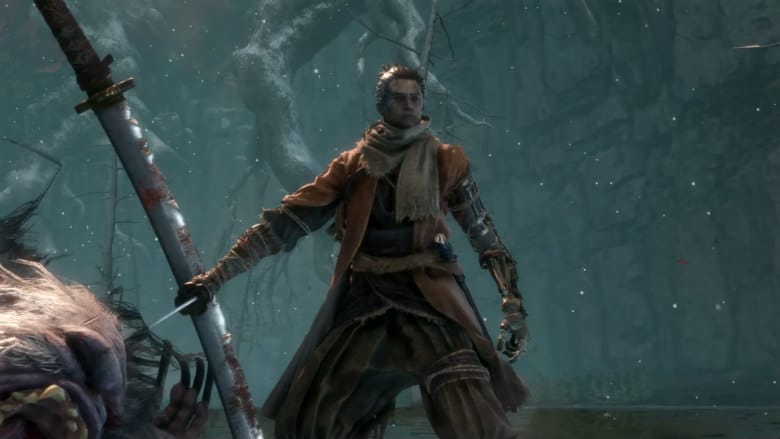 I was immediately struck by the game’s aesthetic; the graphics, music, and atmospheric feel are all utterly transportive. The art style is gorgeous, with a muted color scheme that is less gothic than Souls and perfectly suited to the feudal Japan setting. The beautifully rendered environments make the semi-open world a joy to explore. It’s visually pleasing right down to the combat, with its smooth animations, strategic motion blur, bright red circle to indicate when your enemy is vulnerable to a death blow, and ultimately satisfying spray of blood afterward.

When you’re introduced to your new prosthetic arm by the Sculptor, the first attachment he gives you is the grappling hook; for me, this is one of the highlights of Sekiro. Getting the timing just right so that you soar from grappling point to grappling point is incredibly satisfying. The verticality is evidently a big change from the Souls series, and it makes exploring the map extremely gratifying; you’ll delight in things like finding an item on a small cliffside ledge that you hadn’t previously noticed.

Combat is fast-paced and fluid, not over-complicated but made challenging by the need for quick reflexes and near-perfect timing; one ill-timed dodge could easily mean death. Fortunately, you can mitigate the difficulty of many fights with a little bit of planning and strategy. Some enemies can be avoided entirely through a combination of stealth and grappling, although you may find that this isn’t necessarily the best approach when you hit a mini-boss and you’re short on money/items/spirit emblems.

These same tactics will also afford you the opportunity for sneak attacks, which can instantly kill an enemy but may also alert any in the area, so you’ll need to be strategic about who you want to dispatch first. You will also find various attachments for your prosthetic throughout the map, which will give you a slight advantage over certain types of enemies, adding another element of strategy.

Death in Sekiro: Shadows Die Twice has unavoidable consequences; there is one save file, so you cannot simply load from a previous save. Once I got past my inherent perfectionism and accepted the fact that I would die (and die a LOT), the repeated losses began to feel motivating rather than defeating, much to my surprise. I might need to put the controller down and walk away after falling to the same enemy 10 times in a row, but I’ll soon find myself ready to jump back in and give it another shot. The results of dying are inconvenient but not devastating; namely, losing skill point progress and money, and the spread a disease called Dragonrot, which seems to inflict NPCs that you regularly interact with. At this point in time, I don’t know too much about the effects of Dragonrot or if there is a means of curing it.

Another element that initially felt frustrating but quickly grew on me is the lack of guidance in terms of what to do next. For someone that’s used to specific quests with neat little markers telling you where to go and what to do, the lack of direction can be a little maddening at first. As you explore, though, you’ll gather helpful tidbits from talking to friendly NPCs, stealthily eavesdropping on enemy conversations, and listening to memories.

Having said all that, I must also address the difficulty level. As mentioned, ordinary enemies are challenging but not grueling if you approach them in a strategic manner. Mini-bosses, however, are another story. They leave almost zero room for error, and this is where I seem to have hit a wall. This type of exacting combat is not my forte, and I lack the quick reflexes and precision necessary to advance – whether due to lack of practice or some inborn talent, I can’t say.

I suppose it’s possible that I could beat it if I spent hours and hours honing my skills; unfortunately, I don’t necessarily have the time to do that, which is frustrating because I really do want to progress and experience the rest of the game. I respect that many gamers enjoy the hardcore nature of these games and that not all games need to cater to all audiences, but I feel that things like difficulty settings and handicaps would only serve to make games like this more accessible without detracting from the experience in any way.

I’m not likely to run out and buy a copy of Dark Souls as a result of this experience, but I am glad that I broke out of my comfort zone for Sekiro. It’s unlikely that I’ll be able to conquer it in a reasonable timeframe, but I can definitely see myself picking it up now and then to chip away at the story little by little. It’s a world that I enjoy being in, however unforgiving, and has certainly served to broaden my gaming horizons a bit; previously, I would have been too intimidated to even attempt a title like this. It might be an exercise in futility for me, but this is definitely a can’t-miss for fans of hardcore gaming.