The next animated project in the Star Wars universe has finally been unveiled. Star Wars Resistance is coming to Disney XD later this year. 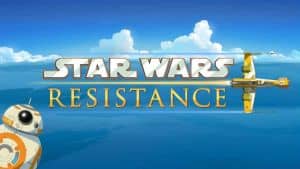 Star Wars Resistance will follow a young pilot named Kazuda Xiono and “focus on the era before Star Wars: The Force Awakens.” The character is recruited by the Resistance and tasked with the secret mission of spying on the First Order.

Due to the series taking place close in time to the current films, we have a few confirmed guests stars. And they’re big ones. Both Oscar Isaac’s Poe Dameron and Gwendoline Christie’s Captain Phasma are both confirmed to appear. With the actors onboard to voice their respective roles. Oh, and BB-8 too.

The art style for Star Wars Resistance is said to be “anime-inspired.” Amy Beth Christenson, also of Star Wars: The Clone Wars and Star Wars Rebels, is the art director of the new series.

Dave Filoni said that his inspiration for his new project stems from his interest in World War II aviation. “My grandfather was a pilot and my uncle flew and restored planes, so that’s been a big influence on me. There’s a long history of high-speed racing in Star Wars, and I think we’ve captured that sense of excitement in an anime-inspired style, which is something the entire team has been wanting to do for a long time.”

Star Wars Resistance will premiere on Disney Channel in the U.S. this fall. It will then find its permanent home on Disney XD worldwide.