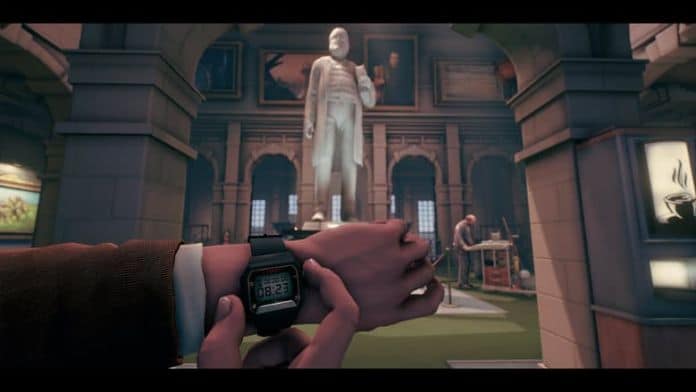 White Paper Games have finally announced when The Occupation will be landing on consoles and PC. The developer also confirmed that they’ve teamed with Sold Out to bring a physical release our way too.

In The Occupation, your greatest enemy is time itself. Following a massive terroristic explosion, the country is completely rattled. You’ve been tasked to serve as the lead investigator following the deadly event to get the answers needed to solve the crime. White Paper Games says that all the events in-game happen in real time. And thus, you must quickly make decisions based upon the evidence you gather. Here’s the full synopsis courtesy of the devs:

“It’s 1987 in North West England; A time of 80’s British pop, grand architecture and political unrest. An explosion has triggered a controversial act which threatens to erode civil liberties of the population to be rushed into place. You are tasked with investigating and questioning people on their actions from a tumultuous night which resulted in the loss of many lives. Each person has a different account of the night’s event and you must use the tools at your disposal to get the results you need for your investigation.

Will you take the most direct route at the risk of getting caught, or plan your approach carefully whilst precious time ticks by? Events happen in real-time and you must make decisions based on the evidence.

You are the reporter. You decide the narrative.”

There’s a lot going on behind the scenes in The Occupation. An uprising is brewing, and it seems as though your character is going to be a primary catalyst deciding whether to help spark a revolution, or snuff out the flames before they grow. All while the clock is ticking and pressure mounts.

White Paper Games has confirmed that The Occupation will be available for PC, Xbox One and PlayStation 4 on October 9th. And thanks to Sold Out, a physical edition of the game will head to retailers on that very same day.