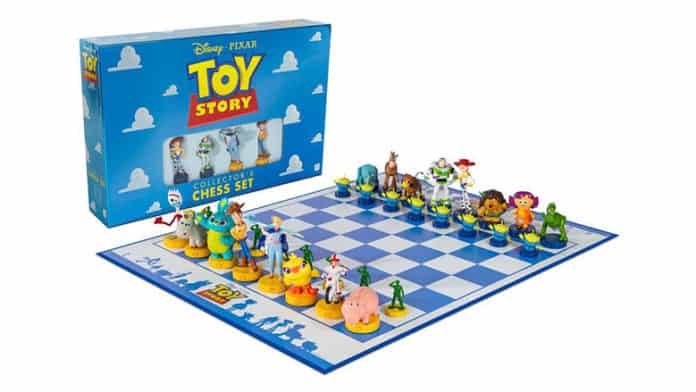 Nothing can bring out the full range of emotions from grown adults like the game of Chess or the Toy Story film series, so why not combine them both into one? With this Toy Story 4: Collector’s Chess Set you can pretend to not cry over Woody’s “So long, partner” and instead grow frustrated at not seeing a rook and losing to someone who is just experiencing a little bit of beginner’s luck.

Most chess sets come with pieces that have maintained the same designs for decades, but this set comes with perfectly painted and sculpted statuettes of all of your favorite Toy Story characters. Woody and Bo Peep are the king and queen for the light side, and amongst their legion are Forky, Duke, Bunny, Ducky, Buttercup, and Hamm serve as the other main roles while the pawns are green army men—ready to lay down their lives on the front line. One the opposing side stand Buzz and Jessie, with Trixie, Dolly, Slinky Dog, Mr. Pricklepants, Bullseye, Rex, and a horde of little green alien pawns ready to fight for ultimate chessboard domination. Do not worry about getting confused as to which character is which role, as the base stand of each statuette comes with a small insignia representing that piece’s role within the game.

The previously mentioned craftsmanship on each individual player piece is also seen on the game board itself. Doing away with the traditional black and white color scheme, this set features an easy-on-the-eyes blue and off-white board with the Toy Story logo and silhouettes of the main characters adorning both sides. This color scheme is further reflected in the packaging for the set as it displays the fluffy and dreamlike clouds and tranquil skies seen in Andy’s room.

This chess set is available for preorder here for $88.99. It is currently estimated to ship out in November 2019.

Previous articleHarry Potter Advent Calendar: Christmas in the Wizarding World
Next articleIt’s a Trap Admiral Ackbar Doormat
Bobby Bernstein
Bobby is the co-owner of Nerd Much?. Bylines at Heavy, Den of Geek, HiConsumption, and More! Like his nerdtastic tweets by following @Thirstiestgamer on Twitter..