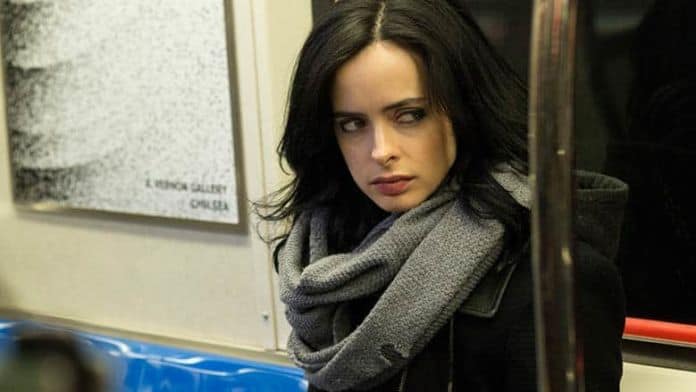 Okay, I’ll admit it. I’m a sucker for both female-driven shows and superhero media of any kind. I love to watch ladies kicking butt and taking names, so when I caught wind of Netflix’s new original series, Jessica Jones, I was immediately intrigued.

In case you missed our spoiler-free episode one review, Marvel’s Jessica Jones stars Krysten Ritter (Breaking Bad, Don’t Trust The B—in Apartment 23) as a “gifted” (i.e. superpowered) woman dealing with the aftermath of her experiences being kidnapped and brainwashed by a man only known as Kilgrave (David Tennant). When not drinking heavily, she works as a private investigator, a nod to the series’ noir mood. It was originally released by Marvel’s Max Comics, which often focuses on much darker storylines and controversial topics than Marvel’s usual lighthearted fare.

While most of the MCU is dominated by straight white men, Jessica Jones flips to the opposite, starring an array of women, people of color, and a few LGBT characters. While watching the first episode, I was struck by how often we were seeing women instead of men — even the majority of background extras with reaction shots were female. Jessica has complex relationships with other women, whereas her interactions with men (at least, early in the series) are defined by whether or not she views them as a threat or worth her time. In terms of relationships, the show doesn’t shy away from lawyer Jeri’s relationship with her secretary Pam, treating them as they would any other couple on the show. The characters are LGBT, of course, but it is not the defining characteristic of their story. It’s refreshing in the landscape of television where LGBT relationships (or Jessica’s interracial relationship with Luke Cage) are still treated with a bit of a taboo air. 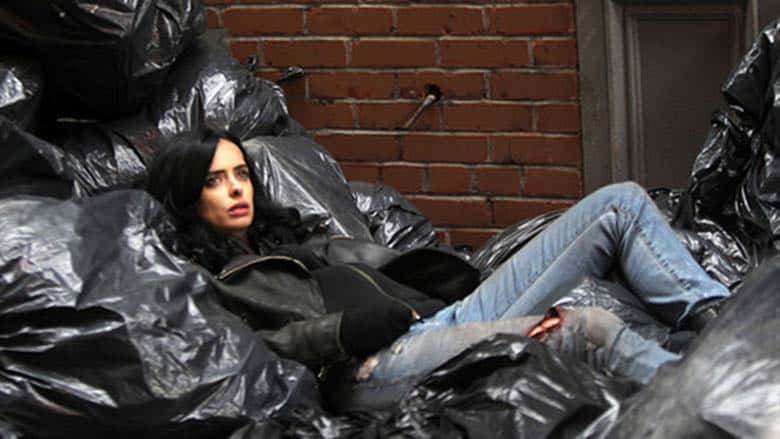 Going in, the first thing that struck me was the cohesive world that is formed around Jessica. Being in the Marvel Cinematic Universe, there are references to the events in The Avengers (and an adorable kid with a Captain America shield in the park); however, this world has none of the capes or campy humor of the MCU’s other offerings. It is as if we are seeing the whole world through Jessica’s eyes — dark, brooding, with danger lurking around every corner. The cool, muted color scheme mirrors the original comics and Jessica’s frame of mind. Camera angles are sometimes shaky or blurred, giving the audience a chance to glimpse of what is going on in her mind. It is an incredibly immersive show, and I felt myself a little twitchy from suspense while watching. (And maybe feeling the urge to put on a leather jacket and kick some ass.)

Ritter’s Jessica is a sarcastic, foul-mouthed, drunken survivor/knight errant who, in dealing with some pretty severe PTSD, attempts to push everyone out of her life. Those around her see her intense need to save people in need as the chink in the armor and it inspires the most incredible loyalty. Her best friend, Trish (Rachael Taylor), is arguably the most in danger throughout the series. Her response, rather than running away and staying hidden, is to learn to protect herself. She fortifies her apartment, trains in Krav Maga, and refuses to back down when everyone tells her she isn’t strong enough to fight. Others loyal to Jessica include Malcom, the junkie forced by Kilgrave to spy on her; Ruben, her upstairs neighbor (a cinnamon roll too precious for this world); and Hope, the ironically-named fellow victim forced to kill her own parents. They see through her sharp words and what danger she could become, and instead bring out the good she is struggling to keep afloat. 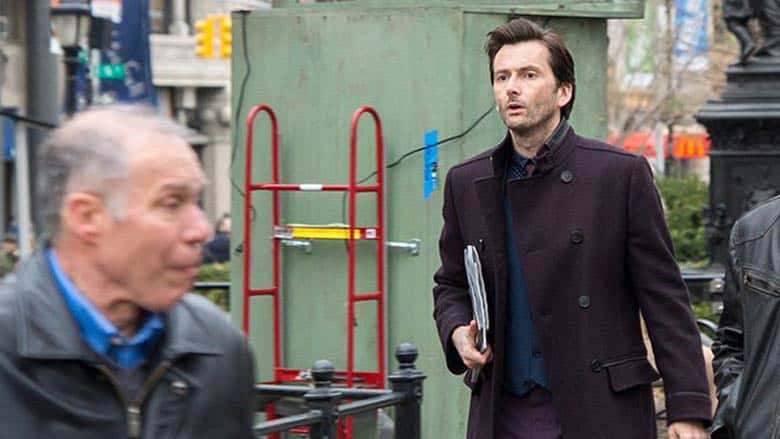 It’s not only the good guys who flock to Jessica like a magnet- she pulls in the bad guys, too. Those of you who have seen Harry Potter and the Goblet of Fire know that David Tennant can play a pretty good villain, but here he takes it to a whole other level. Kilgrave isn’t merely an evil caricature. He is at once repulsive and intriguing, inspiring the audience to hate but feel sympathy for him. He had his own traumatic childhood and truly wishes for Jessica to love him of her own accord. However, as she gets closer and closer to bringing him down, he spins further and further out of control and away from any chance at redemption. Like Jessica, I swung from feeling scared of Kilgrave to sorry for him to feeling pure, unadulterated hatred as the world dances to his merry death tune.

The biggest theme throughout has to do with control. In the beginning, Jessica struggles from PTSD flashbacks and forces herself to recite the names of streets from her hometown in order to feel control over herself. As she discovers she is now immune to Kilgrave’s commanding superpower, she gains confidence and assurance over herself- all the way to the end, when she finds the courage within herself to destroy her enemy once and for all. To me, this was incredibly refreshing, as so many stories that involve violation of a woman do not allow her to develop her own agency and confidence.

The show, despite keeping to the same tone and color scheme of the comics, did make some changes throughout. One of the largest was the replacement of Carol Danvers with Trish Walker — presumably due to storyline conflict with the upcoming Captain Marvel movie. In this incarnation, Trish’s family adopted Jessica after the accident which killed her family and bestowed her super-strength and speed powers. Trish was the first person Jessica ever rescued, and like a baby bird she imprinted that moment and the urge to make the world a better place. She displays a slightly naïve optimism that is a much-needed counterbalance to Jessica’s dark outlook.

We won’t spoil everything here, but Jessica Jones is gripping and incredibly enjoyable. The world feels incredibly real and the action-packed fight scenes will have you on the edge of your seat with suspence. Go forth, binge watch, and enjoy.