Uncharted: Drake’s Fortune Is My Misfortune 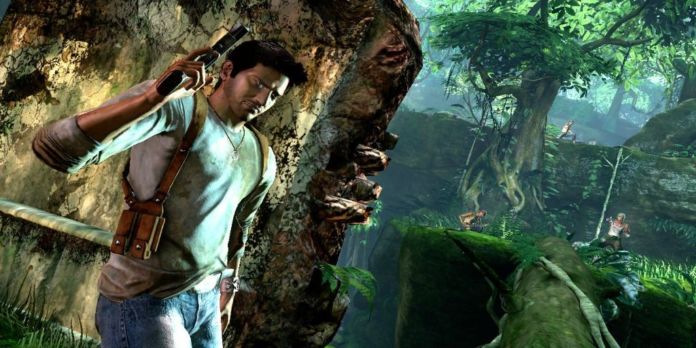 It wasn’t long ago that I bought my PS4. Upon purchasing it, I asked everyone for their recommendations. Most of these were ports, remasters, or collections from the PS3 era—especially when people heard I’ve never played The Last of Us or any of the BioShock or Uncharted games. (A venial sin at best, I know). 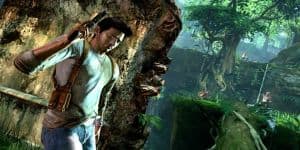 I poked around in both The Last of Us and Bioshock, but other (more modern) games kept demanding my attention. Subsequently, the Uncharted series fell to the bottom of my priority list. That is, until one fateful afternoon when my brother asked if he could play the first game in the series: Uncharted: Drake’s Fortune.

As he fired up the game on my TV, I sat back and watched. Initially, I had planned to have my own save file but after watching the game, which is fairly easy if you’re playing on Normal, I felt it’d be a chore to repeat everything I’d already seen. And so, for the first time in my life, my brother and I shared a singular save file.

At first, things were great

What ensued was some of the most fun I’ve had with a game in a while.

Developed by Naughty Dog, Uncharted: Drake’s Fortune is an action-adventure platformer that revolves around Drake’s quest to find El Dorado—following in his alleged ancestor, Sir Francis Drake’s, footsteps. With the remastered version, Uncharted is a visual treat; the cutscenes and quick time events look great. And I was drawn into the world mostly thanks to Victor Sullivan, aka Sully, Drake’s mentor who is charming in his (often inappropriate) humor. 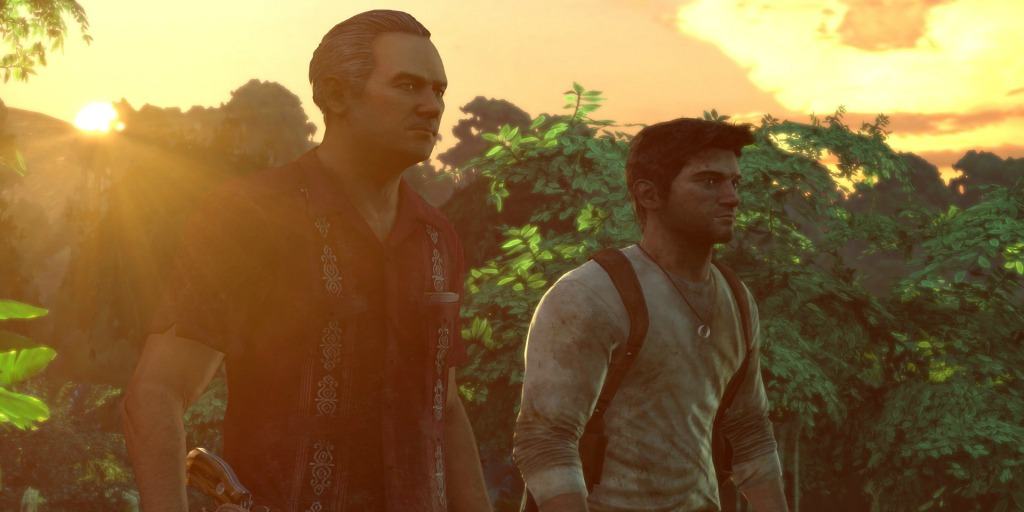 And gameplay wise my brother and I had fun solving puzzles, figuring out where to go next (which can be unclear in the jungle environment that starts to all look the same), and—most of all—shooting guys in the head. In general, neither of us have much experience when it comes to shooters so getting to experience shooting in an approachable context was nothing short of amazing. 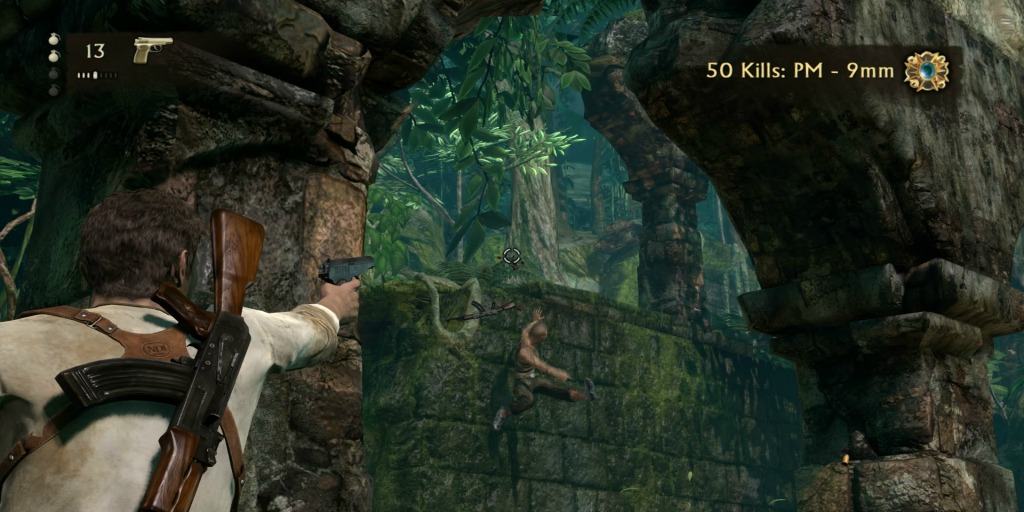 The game’s easiness added to the fun. The lack of difficulty allowed for ridiculous, over the top situations—like abandoning gunplay for punching and kicking your way through gunfire. Initially, Uncharted: Drake’s Fortune presented us with a simple, enjoyable experience. And the inclusion of a variety of vehicles helped keep things fresh. 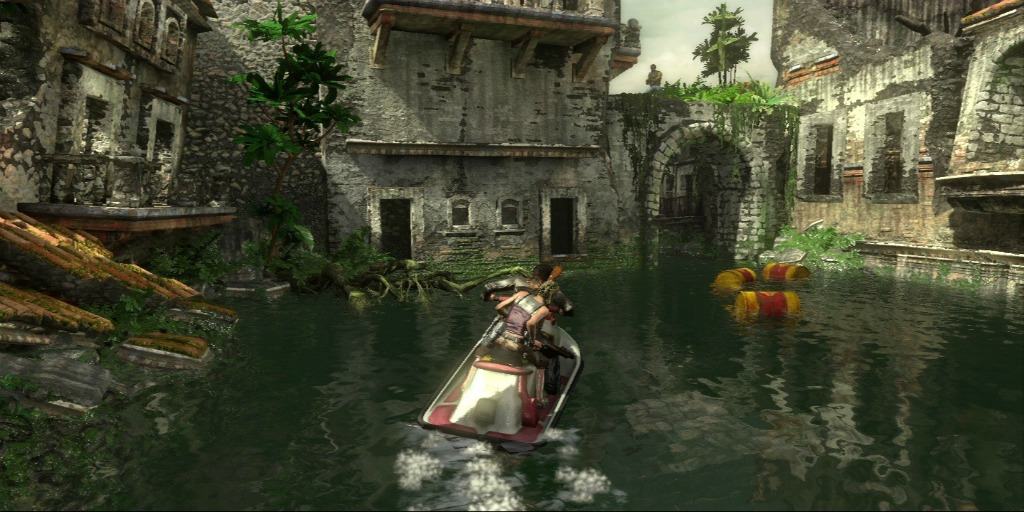 After a few hours of gameplay Uncharted: Drake’s Fortune felt like a very solid start to a highly praised franchise. Halfway through, I’d have given it a 8 or 8.5/10. But then things took an ugly turn… and by the end of it all, this game was a 6.5 for me.

Oddly enough nothing in the game went “wrong.” I can’t pinpoint when this game started to falter for me (and my brother) but it was palpable. The issue wasn’t that the game became worse in its second half or final third; rather, the formula it set up for itself became exhausting. Uncharted: Drake’s Fortune overstays its welcome and, in doing so, inadvertently highlights its own flaws.

Is It Charted Yet?

The gameplay is fun and relatively smooth but it’s a jack of all trades. Uncharted: Drake’s Fortune is a basic third person shooter meets a basic platformer meets a basic puzzler. Which is to say it’s really fun… but only at first. For the last 3-4 hours of the game I just wanted it to be over. I felt like I’d done everything in the game but, for some reason, had to keep playing it.

In general, with a few exceptions, I’m not fan of action movies. Almost every superhero film I’ve seen has left me disappointed (to the point where I rarely watch them anymore). To me, narratively, Uncharted: Drake’s Fortune is that cheesy action flick. It’s got it all:

As I mentioned earlier, the action of Drake’s Fortune is driven by Drake and Sully’s search for El Dorado. Using clues from Sir Francis Drake, Drake’s alleged ancestor, they hope to discover the riches they believe Sir Francis Drake once found. But in the final quarter of the game, things take an interesting turn… demon monster things appear!? It turns out El Dorado was protected by a curse that turned the Spanish colonists and German soldiers (who were after this treasure) into monsters. 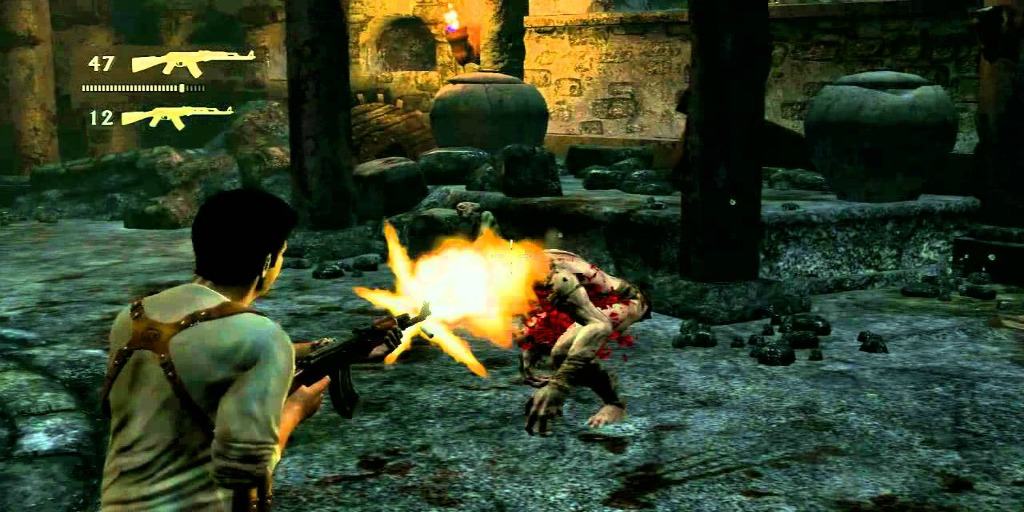 You spend the whole game searching for this treasure and fighting human enemies only to end up in this battle against the other worldly. In a game that seems to pride itself on its realism (visually and in terms of its characters), this felt out of place. However, at this point, I was so sick of the game that I welcomed this change with open arms. At least this is different.

Worst of all was the ending. While the final few waves of goons was classic Uncharted/decently entertaining, the final “boss” was a huge disappointment. Killing this guy wasn’t a matter of time and good shooting. You basically just dodge fire behind very flimsy boxes, run up to him, and throw some punches. Then one or two quick time events occur and it’s over. The whole thing felt pretty anticlimactic.

The (inevitable) defense of Nathan Drake

But despite everything I am still playing (and almost done with) Uncharted 2: Among Thieves—mainly because I already own the trilogy. So, here’s hoping things pick up and thank god I didn’t buy that PS4 with the Nathan Drake silkscreen.

Previous articleLittle Nightmares Review
Next articleWhat Does It Take For A Game To Be ‘Good’?
Janet Garciahttps://www.youtube.com/channel/UCnfZ6eVYE4X2dzDixD5cNrw/featured
Janet Garcia is an editorial writer with bylines at IGN, Kotaku, and more. Her favorite genres are platformers, puzzle games, and simulators but in reality she spends most of her time playing FIFA tournaments in her apartment.