Unfriended: Dark Web is one of those horror movies that sounds good on paper, but fails to live up to its own ambitious ideas. An indirect sequel to the first Unfriended, Dark Web trashes the supernatural aspect for a slightly more realistic plot. While this helps amplify some of the terror, the general direction, poor script, and reliance on jump scares keep this film from being another solid genre movie.

The plot revolves around cyber cafe worker Matias (Colin Woodell) participating in a game night over Skype with his five friends. However, the laptop that our protagonist is using belongs to a dangerous human trafficker who works for a shadowy organization of criminals. What follows is an hour-long cat and mouse game between the friends and the evildoer as they try to outsmart one another. There are some twists and turns along the way – especially once the third act kicks in – that we won’t spoil here. While this does make Dark Web more engaging than its predecessor, a final reveal at the end causes the story to collapse.

To be clear, Dark Web’s concept isn’t bad by any means, as the idea of the dark web is something we don’t see a ton of in mainstream horror flicks. Diving into that world adds a nice sense of realism that grounds a lot of the terror and makes for a more entertaining experience. Yet, director Stephen Susco chains this concept to a ham-fisted twist that is completely based on a random series of events. It’s a poorly constructed “gotcha moment” that doesn’t do anything to add to the horror and ends up crafting a convoluted ending. 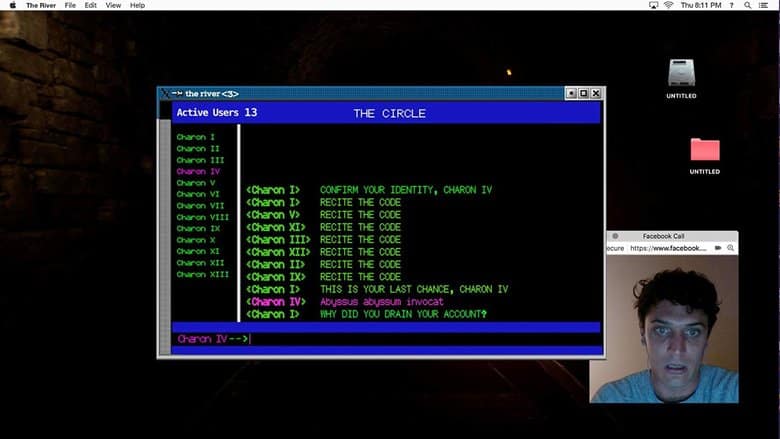 Thankfully, there are some nuggets of genuinely clever ideas buried underneath the terrible dialogue and plot. One involves a unique relationship that develops between Matias and the criminal whose laptop he is in possession of. The duo is in constant communication once the second act starts and it produces an uneasy feeling of always being watched.

Sadly we just don’t get enough actual screentime with the main villain – he typically communicates via Facebook messenger – to truly understand him or his motives. In fact, that’s a constant issue with Dark Web because a lot of the choices character’s make feel either random or completely nonsensical.

There’s a moment where Matias is able to cleanly get out of this nightmare, but he decides to do one of the dumbest things I’ve ever seen in a horror film. It’s a small moment that encapsulates all the problems with Dark Web’s storytelling, as it forces the characters to not act in their best interests for the sake of scares.

Speaking of, Unfriended: Dark Web heavily relies on jump scares and things popping out of nowhere. Susco does use the “giant computer screen” idea to produce some intriguing moments, but they almost always end the same way. This is great for the first few scares, but it quickly strips a lot of the terror away from the main story. There’s only so many glitchy, hooded figures and loud noises you can take before it dulls the senses.

At least the cast seems up for anything that Susco throws their way. Make no mistake, all of the performances here are genuinely solid and they have some terrific chemistry. Betty Gabriel’s Nari and Andrew Lee’s Damon are especially terrific here, it’s just a shame we don’t get to learn more about them.

There’s also a nice dynamic between Matias and his girlfriend Amaya (Stephanie Nogueras). Unfriended focuses a lot on these two as they absorb the majority of the character development. Setting aside the nonsensical story, I felt invested in Amaya’s safety and honestly wish she had more to do in the movie than just playing a love interest. 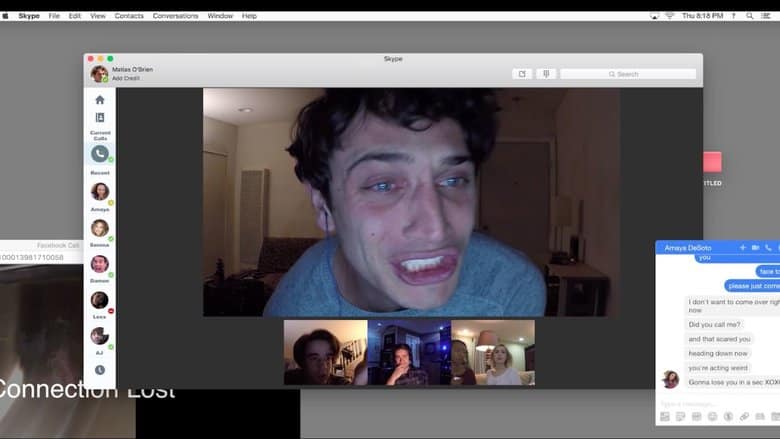 Unfriended’s biggest gimmick is also one of the film’s main issues. Confining the audience’s entire viewing experience to one computer screen is a nifty idea, but the gimmick quickly outstays its welcome. Watching someone expand, minimize, drag, sift, and deal with multiple windows made my eyes glaze over after the first 30 minutes.

There typically a lot of action happening on the screen and it’s hard to tell sometimes where Susco wants you to look. It kills a lot of the tension, as you’ll furiously keep scanning the screen trying to follow every thread and detail the movie offers. This method also hampers a lot of the character progression since we never see the other friend’s computer screens. All of our info about them is conveyed via dialogue or very brief moments on Matias’ laptop.

Unfriended: Dark Web is a film that sounds like a great idea that just doesn’t come together. Having our entire field of view religated to a single computer is extremely restrictive and often ruins a lot of the film’s best scares. It’s a shame too since there are some clever concepts and great performances buried under the terrible story. It’s possible that Unfriended: Dark Web’s aesthetic is more bearable on a smaller screen, but that doesn’t forgive the multitude of cheap jump scares. You can definitely find more entertainment just browsing the web for 90 minutes than watching Unfriended: Dark Web.