Osprey Games, the publisher behind board games like London and Odin’s Ravens, have announced that they will be publishing Martin Wallace’s latest creation: Wildlands. The game will be released sometime in the last financial quarter of 2018. Wildlands is not just any fantasy game either, it has unique elements that make for a vibrant world and fast-paced combat. 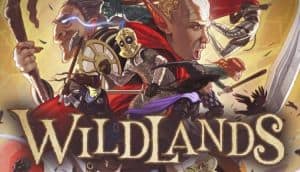 Wildlands can be played with two to four players, each taking on a certain faction struggling for power and riches over a ruined kingdom. The game even boasts a double-sided board and “semi-randomized set-up” for those that might think playing the game once will be enough.

Each player will have a deck of cards unique to their faction that dictates what abilities their character will have, be it ranged attacks, brutal strength, and so much more. That is not to mention the planned updates and expansions that will be coming to Wildlands once it hits the shelves as well. These expansions will include “additional factions, maps, mechanics,” and “new challenges to face.”

There are twenty figurines in total and each are completely unique, lovingly sculpted by Bobby Jackson and Tim Prow. They bring the world of Wildlands to life with every powerful wizard, cunning gnome, hulking beasts, and mighty warriors.

Designer Martin Wallace states that he is more than happy to see Wildlands in the hands of Osprey. Apparently, the publisher has “done an amazing job of developing and refining the system, as well as applying an engaging thematic background.”

The original idea, however, was something that Wallace describes as “something off the beaten track.” Wildlands is “a fast-moving, tactical combat game with asymmetric special powers” that is unlike any old design or themes Wallace has worked on before.

Osprey Games developer Duncan Molloy is thrilled to have worked on Wildlands and cannot wait until the “approachable mechanics” and vivid world of Wildlands are in the hands of players.