World of Warcraft: The Battle For Azeroth Launches Summer 2018

World of Warcraft‘s new expansion, The Battle for Azeroth, will be launching this summer and is available for pre-order. Blizzard also has a beta test coming soon for the expansion, which you can sign-up for on the WoW website. 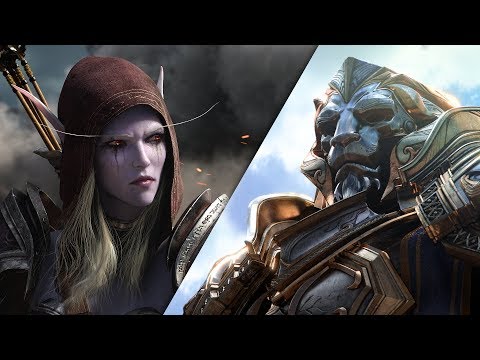 If you pre-order the expansion, Blizzard is offering all sorts of goodies, most especially an instant level boost for any one Horde or Alliance character to level 110. Once you have completed a few Alliance quests and earned yourself the respect of an Allied Race, you will unlock the ability to use that race in character creation. These races include the Highmountain tauren, Lightforged draenei, Nightborne, and Void elves. With your new character and once the expansion launches, you can set out to Azeroth and start your adventures.

The pre-order includes a few items for other Blizzard games as well, like an Azeroth Is Burning card for Hearthstone, Horde and Alliance themed sprays for StarCraft II, a Primal Flamesaber mount for Heroes of the Storm, Horde and Alliance voice lines for Overwatch character Torbjörn, emotes for Tracer, sprays featuring a variety of Azeroth characters, and finally player icons that represent the two new Kingdoms Kul Tiras and Zandalar.

There will be a Collectors Edition of The Battle of Azeroth coming soon. This is for the truly committed which includes even more loot and in-game bonuses, more details will arrive soon.

The Battle of Azeroth features two new Kingdoms (Zandalar and Kul Tiras), the aforementioned recruitment of Allied Races, a new area called Islands of the Great Sea where you can meet new enemies and battle in groups of three, a 20-player cooperative called the Warfront inspired by the RTS days of Warcraft, new material to infuse your armor with called Azerite, and finally an all-new level cap at 120.

If you are looking to unlock a Heritage Armor set for your new character, you must level that character up from 20 to 110 without any outside influence like faction/race changing, and the Recruit-A-Friend program.

Want to know what other MMOs are on the horizon for 2018? Check out our list of the upcoming MMOs.