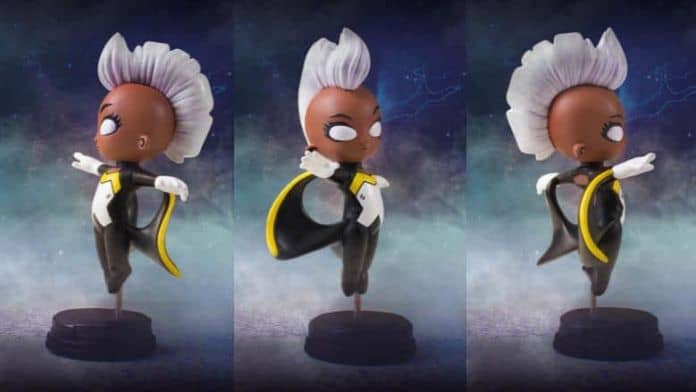 This Storm statue was designed by Gentle Giant after the artwork on the cover of STORM #1 by Skottie Young. The illustration is of a very young Storm creating a beautiful purple thunderstorm with lightning arcing around her gloved hands. The statue was digitally created and then printed on state of the art 3D Systems 3D printers. After that, each statue is hand-cast, hand-painted, and hand-numbered with a limited edition Certificate of Authenticity.

Gentle Giant has depicted Storm exactly as Young drew her. Storm is using her powers to float above her base while the wind makes her cape bellow out. Unlike later versions, this Storm has her telltale white Mohawk for extra badass mutant points. Storms certainly receives a lot of the latter with her rough backstory in Cairo as a master thief. Raised an orphan, Storm learned to survive on the streets until she became one of the most loyal and trusted members of the X-Men.

There are two other variants of Storm #1 comic book covers, both of which show Storm as an adult, though her costume and hair remain the same as Skottie’s version. The younger Storm is certainly the better choice for Gentle Giant’s Marvel series, as all of their animated statues are done in the same young or chibi-like fashion.

That said, if you like the look of Gentle Giant’s Storm, I highly recommend the Venom Marvel Animated Statue. I assure you it is not nearly as sinister as the name might imply and is definitely the best in the company’s series.

If you’d like to get Storm now, you can pre-order it for $64.99 from Entertainment Earth and Storm will ship in July 2019. Though the date seems like a long way away, it shows how much care Gentle Giant puts into their products. The waiting period is so that the company can ensure that each figure is perfect and exactly as you see it in the photographs above.

Previous articleTrain to Busan Remake Being Sought by Numerous Studios
Next articleOctober Games with Gold, Xbox Game Pass Titles Announced
Rhys Pugatschew
Rhys found his love of gaming in Zelda and expanded to almost all genres. He will be bringing you the latest news in the industry. He has worked for ZeldaInformer and CheatCC, happily writing his opinions for all see!