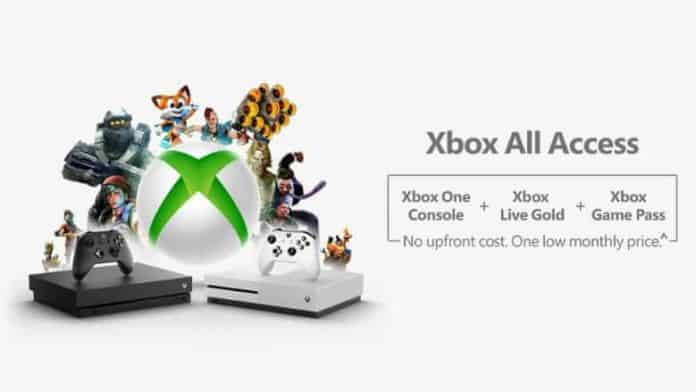 Microsoft announced this afternoon what has been long rumored. The company is offering a subscription plan that is the first of its kind. Xbox All Access will bundle an Xbox console, an Xbox Live Gold subscription, and Xbox Game Pass membership within a two year contact price.

The deal is being advertised as “a limited-time offer” and will only be available at Microsoft Stores within the United States for now. It’s also noted as a “while supplies last” deal.

There is no down payment required to initiate the Xbox All Access program. However it is noted on Microsoft’s site that it’s only open to “qualified customers”. A credit check will likely be done before approval of the deal is authorized.

The deal includes 24 months of Xbox Live Gold and 24 months of Xbox Game Pass in addition to an Xbox console that you’ll own at the end of your 24 month contract. There are two varieties of consoles offered. You can opt for the brand new Xbox One S 1TB console for $21.99 a month. Or you can splurge and go for the Xbox One X version of the deal for $34.99 a month.

Microsoft touts that the Xbox One S offer equates to a saving of “over $130” over buying everything outright. They also confirmed that both the Xbox One S and Xbox One X deals feature 0% APR financing over the 24 month span.

If you’ve been intrigued by the gaming options exclusive to the Xbox One and have been held back financially, the Xbox All Access program is an excellent solution to get you within Microsoft’s ecosystem. There are quite a few quality exclusives on the system, with more big names like Halo Infinite and Gears 5 on the way. And with the majority of first-party titles are being included within your Xbox Game Pass subscription, you’ll likely never run out of games to play.

Previous articleThe Haunting of Hill House Premieres in October on Netflix
Next articleCyberpunk 2077 Debuts 48 Minutes of Gameplay
Jeff Scott
Growing up a 90's kid, Jeff found his love for gaming during Nintendo's heyday. Because of that, you could (perhaps sadly) call him a "Nintendo Fanboy" to this day.