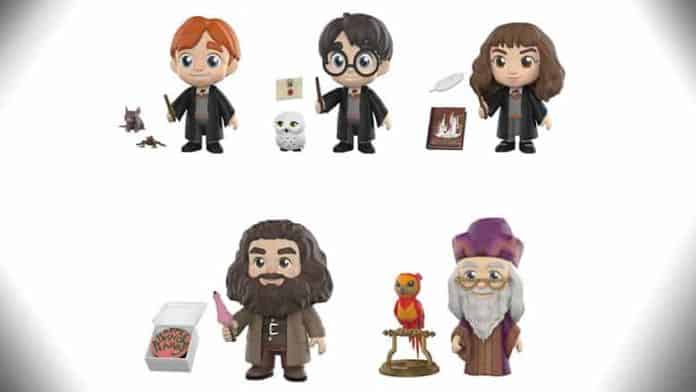 Funko has been a formidable leader in the pop culture consumer products industry since it was founded in 1999, and it’s no mystery why. With such awesome collectible lines like, Pop! Dorbz, Mystery Minis and Pint Size Heroes, Funko has amassed a significant following. Whether you have a full Funko Pop collection already, have been itching to expand, or looking for the perfect gift for the Funko fan in your life, it is time to get excited.

Funko has announced that they will be introducing an entirely new line of vinyl collectible figures dubbed the 5 Star line. The company will be starting with the Harry Potter franchise, and the first 5 Star Harry Potter figures will launch on July 10, 2018.

This all new line has the same attention to detail and classic character styling that you know and love. However, the new line of figures also unveils some cool new features. With three points of articulation there are even more ways to play and display your new collectibles. Even the packaging is fun and new. Every figure is displayed in window box packaging that places each character somewhere within their own story. Each figure measures about 3 ¾ inches tall and comes with its own uniquely thoughtful accessories.

To start, there will be five 5 Star Harry Potter figures. Representing the Wizarding World with style, the figures to be released include: Harry Potter himself, his faithful friends Ron Weasley and Hermione Granger, as well as everyone’s favorite professors, Albus Dumbledore and Rubeus Hagrid.

Each figure comes with their own animal companion (Fawkers, Scabbers, Hedwig) or a defining character accessory (Hagrid’s pink umbrella, or Hermione’s quill).

Funko is expected to begin expanding the 5 Star line with the addition of several other licenses, including DC later this year. Who do you want to see released under the 5 Star Collectible line? Sound off in the comments below.