Batman: Power to the People Light Makes Any Desk Heroic 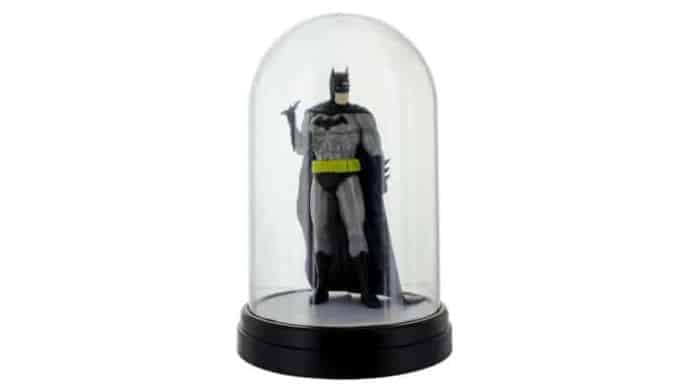 If you’re looking for a cool way to liven up your bedside table or workspace, Merchoid has just the thing. The site is selling a badass Batman: Power to the People light that’s both heroic and helpful.

The Batman: Power to the People light stands about 8 inches tall, so it’s a good size without being imposing. The light features Batman in his typical garb. Gray costume, black cape, and cowl, yellow utility belt. The vigilante is posed with a Batarang in hand to let would be villains known he’s ready and waiting.

Merchoid’s Batman: Power to the People light features touch on and touch off functionality that is powered via a micro USB cable. And this awesome light is officially licensed so you know it isn’t some cheap knock-off attempt.

You don’t have to be Bruce Wayne to afford this bad boy either. The Batman: Power to the People light is available for $36.99 with Merchoid offering free shipping to the U.S. and Canada. If you’re unhappy with your purchase for whatever reason, the site has a 100 day “easy, no hassle” return policy too.

With just 7 weeks until Christmas, this Batman: Power to the People light could be the perfect gift for someone amongst your friends and family. But if you’re rather get something Batman oriented other than a light, checkout our previous posts detailing our other finds.

There’s a great Batman: The Animated Series Joker action figure. An adorable yet fearsome Batman Yellow Lantern XXRay figure. And even a really dope retro Christmas ornament featuring the Adam West and Burt Ward iterations of Batman and Robin riding in their Batcycle. Take a peek and make someone’s Christmas even more amazing.

Previous articleWalking Dead Movies Starring Andrew Lincoln Announced
Next articleWar of the Worlds Series Eyes Greg Kinnear to Star
Jeff Scott
Growing up a 90's kid, Jeff found his love for gaming during Nintendo's heyday. Because of that, you could (perhaps sadly) call him a "Nintendo Fanboy" to this day.