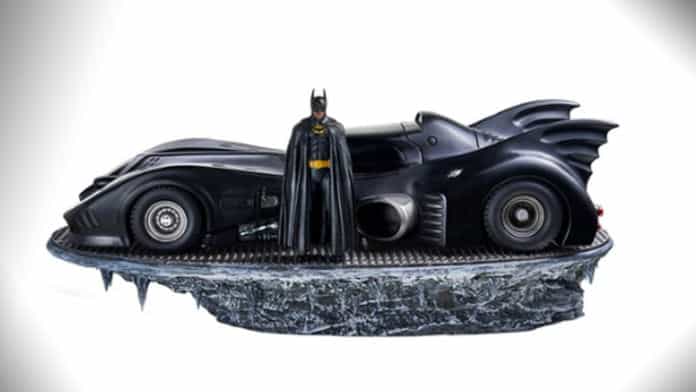 Measuring 11” x 29.5” x 13.7” and weighing in at 41.3 lbs, the scaled collectible is a faithful recreation of Michael Keaton’s portrayal of Batman. Carved facial features are so detailed that they perfectly capture Keaton’s moody hero. Sporting his iconic cowl, cape, yellow utility belt, and black and yellow insignia, the detailed Batman statue is only half of the appeal of this must-have collectible.

Behind the Caped Crusader sits the Batmobile, as seen in the 1989 movie. Heavy detailing showcases every nook and cranny of the signature ride of Gotham’s protector. Yellow headlights, red taillights, detachable machine guns, and the vehicle’s mechanics are all added for authenticity. Pop open the cockpit to find a detailed interior, featuring a steering wheel, gear shift, seating, and a colorful dashboard full of buttons that are sure to ruin any criminal’s day.

The Batman figure is made from polystone for a durable build. Supporting Batsy and his ride is a Batcave-themed base, complete with stalactites, a rocky wall, and metal grating to replicate Batman’s secret lair – minus the bats.

Batman fans will want this heavy-duty deluxe piece on display in a media room as a focal piece. It’s an impossible-to-miss, must-have addition to any Batman collection that leaves nothing to the imagination. Inside and out, there is so much to admire on this scaled model.

The villains of Gotham are no match when the 1989 version of Batman glides onto the scene. Backed by his trusty Batmobile, there is no bad guy that Tim Burton’s Batman won’t be able to send to Arkham.

The only thing missing from this incredible display piece is Alfred Pennyworth with some fatherly advice for the Caped Crusader.