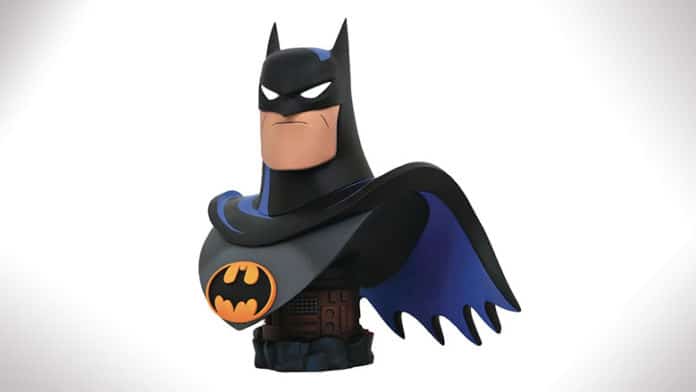 We’ve enjoyed many different iterations of the Dark Knight. From comic books to theatrical releases, Batman has gone from a noble Caped Crusader to an embrittled old man forced to face his greatest failures. Still, through all of these depictions, we always fall upon his portrayal in Batman: The Animated Series as one of the best.

Between the unmistakable voice of Kevin Conroy and the Dark Knight’s stoic appearance, the animated version of Batman has become a memorable piece of the character’s history. Capture this piece of DC and Batman history with this 1:2 scale bust and immortalize the 1990s animated series forever.

The scaled replica expertly reproduces the look of Batman from The Animated Series, from the blank white eyes to the permanent scowl on his face. Batman’s black cowl and grey chest piece help complete the look, which is enhanced by the use of blue to better match the character’s appearance in the animated series. Right at the center of this detailed bust is the iconic Batman logo, depicted in the same classic yellow and black.

The Batman: The Animated Series Legends 3D bust is releasing in limited quantities in July 2020. Only 1,000 of these incredible pieces will make it to the public, and each 10” bust will fit perfectly within every Batman collection. The bust comes packaged in a colored box and is packed with a hand-numbered certificate to prove authenticity.

Bring home The Caped Crusader with a bust that will make you feel protected from the greatest villains of Gotham City. There’s only one person that would be crazy enough to break into your home with those eyes staring at them, and if he’s after you, not even Batman can save you.