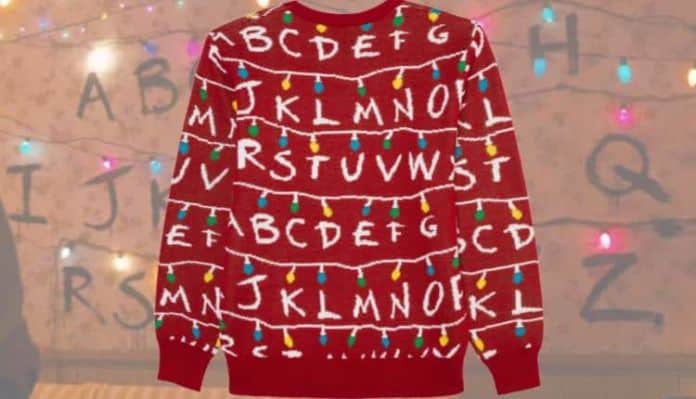 Stranger Things has probably been the most iconic show of the past year and due to it’s popularity, we get lots of merchandise for it! Like this Stranger Things Christmas Sweater. It’s pattern is themed after one of best scenes in the first season, in which Joyce Byers had set up her rather excessive amount of Christmas lights. 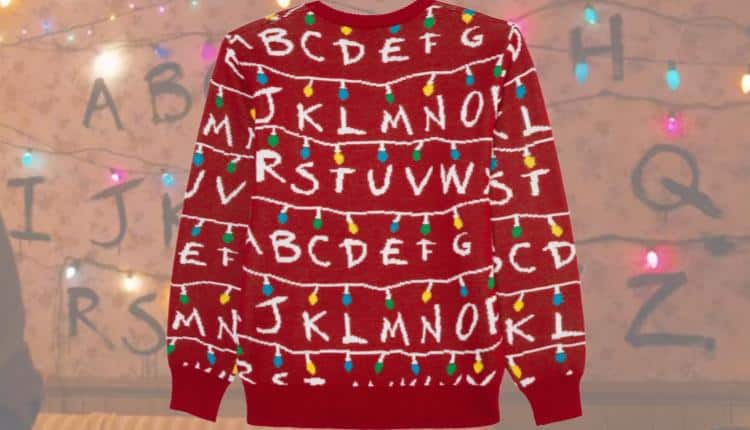 She believed strongly that her son was communicating to her through the lights and eventually set them up on her wall in rows. She then wrote a letter for each corresponding light, pleading with her son to try again to speak to her properly.

Will managed to let his mother know that he was “here,” only to promptly tell her to run. Joyce turns to find a demogorgon pushing through her living room wall. It doesn’t take long before she smartly makes a run for it as she was told.

It was a moving scene to say the least, as we’re right with Joyce on the emotional journey of not only trying to find her son, but realizing you’re on just this side of crazy. A lot happened at once in this scene: confirmation that Will was alive, actually talking to Joyce through the lights, the demogorgon is real, and flickering lights heralded the arrival of the demogorgon too.

If this happens to be one of your favorite scenes too, the Stranger Things Ugly Christmas Sweater is a must have. The background is a bright red to better contrast with the white lettering. Though the actual scene in the show had more colors, this sweater only has green, blue, and yellow in a seemingly random order.

It does not actually light up, like some sweaters do, which is a bit unfortunate. That also means the sweater is at the reasonable price of $32.99 USD instead of the usual $60 that most online Christmas sweaters are.

It’s made out of a cotton blend, so make sure you’re ready for it to shrink in the dryer after the first wash. Even if it does say the material is machine safe, it is better to have a slightly over-sized sweater than one more appropriately sized for a doll.