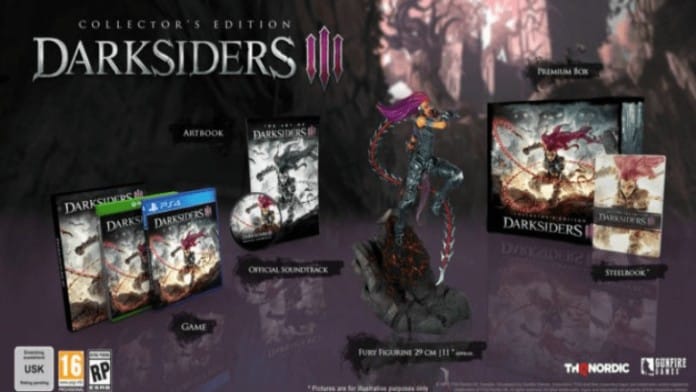 Darksiders 3‘s release date is finally here and it drops this fall, November 27th, for Xbox One, PlayStation 4, and PC.

This hack n’ slash action RPG takes us through the tale of the Four Horseman of the Apocalypse. Here is where we’re picking things up this fall, according to the Darksiders official website.:

Earth is now overrun by the Seven Deadly Sins and the mystical creatures and degenerated beings that serve them. The Charred Council calls upon Fury to battle from the heights of heaven down through the depths of hell in a quest to restore the balance and prove that she is the most powerful of the Horsemen.

If that sounds like your thing or you’re a longtime fan of the franchise, you may want to upgrade from the standard edition of the game:

The standard game can be purchased for the usual $59.99 but die-hard fans can also scoop up two premium editions of the game. The Collector’s Edition costs $149.99 and includes the following:

If that’s not enough for you The Apocalypse Edition costs a whopping $399.99 and includes the following:

Darksiders has always had a really intriguing setting and story premise behind it. These editions look pretty on screen but we’ll see how they hold up in person.

Will you be picking up the Standard Edition, The Collector’s Edition, or The Apocalypse Edition of Darksiders 3? If these editions don’t stand out to you what would you have liked to see instead? What makes a good collector’s edition? Let us know in the comments below.