While deemed as enjoyable to most that give it a whirl, Lawbreakers isn’t doing so hot. It’s modest player base has dwindled considerably. So much so that members of the Nerd Much? staff have reported an inability to even get into a match on the PlayStation 4 version. Steam charts also indicated that the PC version of the game had hit an all-time low of 10 players last week. Yikes.

That’s not deterring Boss Key Productions though. The studios co-founder and head, Cliff Bleszinski, has announced that version 2.0 – dubbed the All-Star update – will be ready to launch this week. And with it, some major changes in an attempt to win back fans. 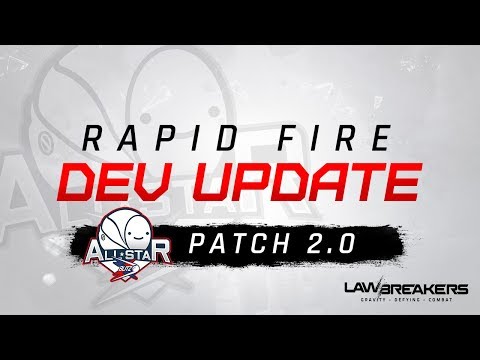 Boss Key Productions is implementing ranked mode into the game which they’ll be calling Boss Leagues. Playable either solo or duo, it features a ladder-style ranking model and will launch a beta season they’re calling Season 0 to get players’ feet wet.

The studio is encouraging player involvement in the ranked competitive realm by offering exclusives such as profiles and weapon skins. You have to be at least level 5 in Lawbreakers to be eligible for the Boss League.

The development team is also introducing two new maps into the game. Redfalls Blood Moon will be a reworked version of the already existing Red Falls map. While Gateway will be a Blitzball arena. The team describes it as “the world’s first mobile stadium, which floats effortlessly in the sky thanks to Hadronium’s anti-gravitational properties.”

If you’re interested to jump into the world of Lawbreakers as the All-Star update heads our way, it’s available for $30 on both PC and PlayStation 4. The All-Star update will be available as of October 19th. We’ll see if this is the shot in the arm that Cliff and his team’s passion project so desperately needs. Otherwise, rumors of going free-to-play may actually become a forced reality.