Showcased at the Paris Games Week was Onrush, an all new arcade racing game. It will launch in the summer of 2018 on the PS4 and Xbox One. As game director Paul Rustchynsky states, Onrush is less about the “tire choices, car setups or even racing lines” and more about “edge of your seat action and taking death defying risks in order to reap the biggest rewards.” 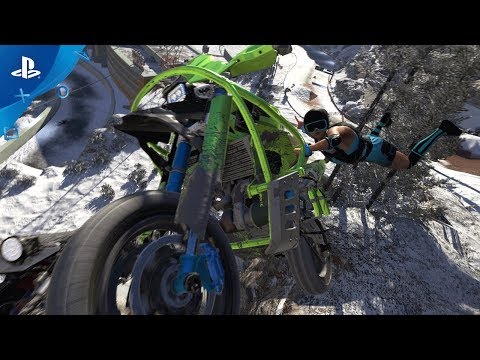 You do this with a nifty game mechanic the Codemasters, developers of Onrush, called RUSH. As you race, this RUSH bar fills up and when used at the perfect moment, can produce an “exhilarating and devastating force” upon your competition. A little like Mario Kart’s blue shell, RUSH can “wreak havoc” and make for an epic finish.

Rustchynsky explains that Onrush was inspired by the iconic racing arcade games of old, back when you had to go to an actual coin-operated game machine to play. As such, the Codemasters are thrilled to finally have a game like Onrush on console so you can play this type of game at home instead.

Some coin is required however, as Onrush is priced at a full $59.99 USD. The game certainly looks like a wild ride and half with cars being tossed and rolled across the screen. The environment is also destructible, giving Onrush that extra thrill.

If you’ve never heard of Codemasters, this is the same studio behind DiRT, Grid, and Formula 1. The latter actually one a BAFTA and developers are leaders in all things racing and driving. Speed, destruction, and fun, are what these folks do best.

As Rustchynsky says, “the most important factor in the game is that it has to be fun.” Not too many bells and whistles, just plain ol’ break-neck speeds and racing to the finish line regardless of the price tags and destruction you leave behind you.