Our PlayStation Plus August lineup has been revealed, and we have a few interested titles headed toward the consoles of Plus subscribers. 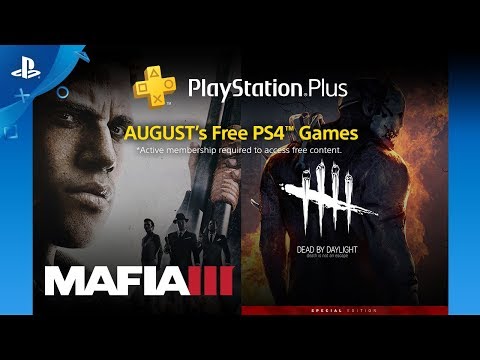 This month’s highlight for many will be the inclusion of Hangar 13’s Mafia 3 on PlayStation 4. The game is set in 1968 New Bordeaux and puts you into the role of Vietnam veteran, Lincoln Clay. It’s an open world title akin to the current Grand Theft Auto series. And while the game showed a lot of promise upon its debut, it was ultimately held back due to severe bugs and repetitive gameplay.

Dead by Daylight, also for PlayStation 4, is a fun 4 v. 1 survival horror title from Behaviour Interactive. During matches, 4 players run around as survivors in 3rd person view as they attempt to escape the game’s killer who views the match from 1st person. To run free, survivors must complete a series of generators in order to open up the level’s gate to escape. All the while trying to avoid the killer who is out to torture and kill those remaining.

For PlayStation 3, Bound by Flame is coming to the PlayStation Plus August package. It’s a fantasy themed RPG that didn’t get many looks following its release. Also on PlayStation 3 is Serious Sam 3: BFE. Reviewed as one of the better titles in the Serious Sam series, BFE earned a 72Metascore on PC. The title serves as a prequel to Serious Same: The First Encounter, so it’s a solid entry point to those fascinated by the overall Sam lore.

For Vita this month we’re getting Draw Slasher. It’s a touch screen controller ninja game in which you “Cut, slice, snip, sever, chop, shear and trim hordes of Pirate Monkey Zombies” all with the touch of a finger. We’re also getting Space Hulk, a turn based strategy title set in the Warhammer 40,000 universe.

The PlayStation Plus August crew is rounded out by the PlayStation VR exclusive, Here They Lie. And the PlayLink enabled Knowledge is Power game show you play via your phone with friends.